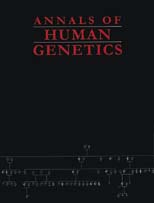 Smoking is a major risk factor for coronary heart disease (CHD), but this risk may be modified by an individual's genotype. A common functional 5A/6A polymorphism in the promoter of the stromelysin-1 (matrix metalloproteinase 3, MMP3) gene has been identified. The 6A allele has been consistently associated with faster progression of angiographically determined CHD, while the 5A allele has recently been associated with risk of acute myocardial infarction (MI) in patients with unstable angina. To date there has been no prospective study of the relationship of this genotype to CHD risk in smokers and non-smokers.

DNA was available from 2743 middle-aged men, free of CHD at baseline, recruited through nine general practices in the UK for prospective surveillance. To date there have been almost 24000 person-years of follow-up with 125 CHD events (fatal and non-fatal MI, sudden coronary death, need for coronary artery surgery or new major ECG Q-wave abnormality). Men with events were each matched for age, practice and cholesterol level with three healthy men. Smoking habit was determined by questionnaire. 5A/6A genotype was determined using a heteroduplex generator method. Associations between genotype and disease outcome, according to smoking status, were assessed using conditional logistic regression. Overall, current smoking was associated with a relative risk (RR) of 1.99 (95% CI 1.30–3.06) as compared with never-smokers and ex-smokers combined (p<0.002). In non-smoking men, and after adjustment for conventional risk factors, compared with the 5A5A group, the RR was 1.37 (0.64–2.94) in those with the genotype 5A6A and 3.02 (1.38–6.61) in those with the genotype 6A6A. Smoking increased risk 1.4 fold in the 5A6A group to 1.91 (1.84–4.36), by 1.3 fold in the 6A6A group to 4.01 (1.57–10.24), but by 3.81 fold (1.54–9.40) in the 5A5A group (smoking–genotype interaction p = 0.01). The data indicate a key role for stromelysin in the atherosclerotic process. Men with the stromelysin genotype 5A5A represent 29% of the general population, and their high risk, if smokers, provides a further strong argument for smoking avoidance.

* Views captured on Cambridge Core between September 2016 - 5th December 2020. This data will be updated every 24 hours.