The tendency of icebergs to roll or heel over is well-known, and so the potential hazards and difficulties of towing unstable icebergs may be appreciated. It follows that there is a need for both accurate and approximate techniques for determining the stability of an iceberg.

The stability of an iceberg can be determined accurately only when the data on the berg are complete. If the data are incomplete or approximate, it is necessary to know to what degree the stability is dependent on various parameters, especially those parameters associated with the under-water shape of the berg. Allaire (1972) failed to analyse this dependence, and, also, his technique applies only to certain shapes of icebergs. The present paper modifies, extends, and improves Allaire’s work, yielding approximate estimates of stability for almost any shape of iceberg. Moreover, the essential parameters affecting stability are presented, so that the reliability of estimates made in the field may be evaluated.

The basic parameters for the stability of any floating homogeneous body may be reviewed briefly as follows:

Fig. 1. Vertical cross-section of a floating homogeneous body, shown in equilibrium and in a tilted position.

We are not assuming a uniform cross-section. Figure 1 represents a plane of the berg containing the points C, G, and B. That they lie in a vertical plane is obvious from equilibrium considerations. M is the metacentre associated with rolling about an axis perpendicular to this plane. As we are interested in the axis about which rolling is most likely to occur, the axis chosen is such that the average water-line width of the berg along that axis is a minimum. We call this the major axis of the berg, and the minor axis is perpendicular to it, passing through the plane containing C, G, and B. In practice, it may be difficult to locate the major axis. As a general rule, the major axis may he taken to be the axis along which the water-plane area of the berg has maximum horizontal dimension.

The distance BM is given by the formula

where I is the area moment of inertia of the water-plane section of the body about the major axis and V b is the below-water volume of the body. We take the ratio of the density of glacial ice to sea-water as 0.875, then, for an iceberg, from Archimedes’ Principle, V b = 7V a, where V a is the volume of the above-water portion of the berg. Moreover, by taking moments about G, it is clear that for equilibrium, GC = 7BG or BG = 0.125 (BC). In our previous notation, BC = h̄ + H̄.

The only unknown (unless total information on the berg is available) is the value of H̄ Everything else may be calculated from the above-water portion.

To obtain an estimate for the distance H, we introduce a parameter y, the under-water fullness coefficient associated with the under-water shape of a berg. It is defined by the equation,

If the under-water portion of a berg has vertical sides, then y = 1. The coefficient y is an indicator of deviation from this shape. It is not intended that y should be quantitatively measured, but rather that it should be estimated by comparison with the known fullness coefficients for certain standard shapes. A further discussion concerning y is given in section 6.

For an iceberg with an estimated underwater fullness coefficient y and average height above the water-plane section h av, the depth of its centre of buoyancy below the water line is estimated from the equation

To obtain an estimate for h̄ we introduce a parameter x, the above-water fullness coefficient, associated with the above-water shape of a berg. It is defined by the equation

. If there are significant variations in width,

is a significant underestimate for k 2.

As with the coefficients x and y, z is estimated for a particular berg by comparison with known fullness coefficients for certain standard shapes. In section 5 there is a list of such shapes.

For a given berg with an estimated water-plane fullness coefficient z and average water-line width ω̄, the radius of gyration of the water-plane section about the major axis is estimated from the equation

The critical stability ratio for an iceberg with fullness coefficients x, y, and z is determined by Equation (2) when GM = 0. Namely,

It should be possible for an experienced observer to estimate the above-water fullness coefficient for a berg reasonably accurately, provided the berg is not very irregular. Intuitively, x measures the average rate of decrease in horizontal cross-sectional area relative to height. A selection of standard shapes with their fullness coefficients is shown in Figure 2. 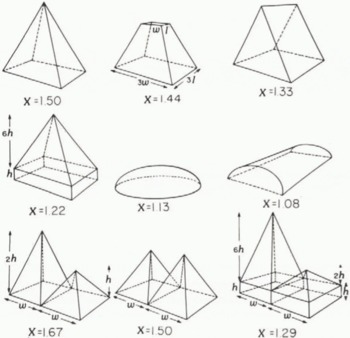 In practice, a rather fuller selection, including more composite shapes, would be needed for making good estimates of x. Drydock shapes are not included in the selection given here, as these bergs are discussed in section 7.

It should be noted that of those bergs that would be classified as pinnacled, there is a wide variation in the fullness coefficients x, and therefore significant variations in the stability characteristics of such bergs.

The coefficient z measures the mean deviation of the width of the water-plane section along the major axis from the calculated average width ω̄. If two icebergs have the same average width and height, and are of similar shape, the one with the more significant variations in water-line width is the more stable. A selection of standard shapes with their fullness coefficients is given in Figure 3. 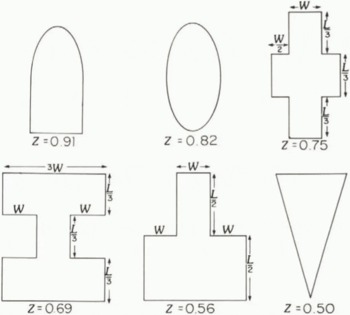 In Equation (3) for the critical stability ratio, let us assume that x and z are fixed; then to what extent does the critical stability ratio depend on the under-water shape and, therefore, on y? Any error in the estimation of y is approximately halved in the equation by taking the square root of (x + 7y). Variations in y are dependent on whether the horizontal cross-sectional area of the berg below the water line increases (bulging) or decreases (tapering) with depth. 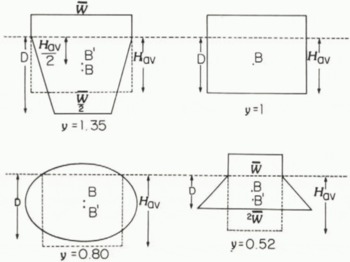 In practice, it is often visually clear that the below-water part of the berg spreads out from the water line, i.e., that the berg is of the bulging type. Also, the angle of entry into the water plane of the above-water portion may indicate whether or not the berg bulges or tapers. A berg that is relatively old (judged in terms of distance from its source, degree of surface deterioration, crevassing, or depth of wave notch at the water line) and shows no signs of having recently rolled (no clearly defined wave notches at oblique angles to the water line) could generally be assumed to be of the bulging type. From the work of Josberger (1978) and from observations in the field, it is apparent that maximum ablation occurs near the water-line level. In fact, it is unlikely that the y coefficient is much less than 0.9. Recent studies, e.g. Russell-Head (1980), seem to indicate that below the wave-notch level, the berg tends to taper down.

For a berg that shows signs of having recently rolled, there may be certain indications of under-water shape. For example, if there are two or more recent wave notches at angles less than 45° to the horizontal plane, a certain degree of radial symmetry in the under-water shape is apparent, indicating a fullness coefficient close to 0.8 or 0.9. A berg that has rolled through an angle of the order of 90° is likely to have originally been of tapering under-water shape. In its new orientation, it seems probable that its under-water fullness coefficient is less than one. Although these statements are largely speculative, there does seem to be a fruitful line of investigation apparent in the problem. The problem is related to that of whether the draft of a berg increases or decreases after it has rolled.

Lastly, if a rough estimate of the draft could be obtained (by radar, sonar, or even bathymetry of the region), there is a much better chance of obtaining the below-water shape type and then an approximate value for y. It seems plausible that for icebergs there is a correlation (possibly very crude) between the draft and the coefficient y. Such a correlation would greatly improve the accuracy of the critical stability ratio formula. From the information available, the generally low values for draft-to-height ratios (e.g. 4 or 5 to 1 for tabular, 2 to 1 for pinnacled) would tend to indicate that values of y < 1 are to be expected. Unfortunately, the information collected on draft-to-height ratios is often unhelpful or even misleading. For example, icebergs classified as pinnacled, of the same average height and draft, may have draft-to-height (maximum height) ratios ranging from 2:1 to 4:1.

For a drydock berg with a relatively large proportion of its slot below the water line, some further modification is needed. When the slot is approximately perpendicular to the major axis of the berg, there is proportionate reduction in the moment of inertia of the water-plane section of the berg. Thus, if a third of the (implied) water-plane section is submerged slot, the moment of inertia is decreased by a third and the critical stability ratio is increased by a factor

The above-water fullness coefficient x is high for drydock bergs. A range of values for a variety of drydock shapes is given in Figure 5. The high values of the fullness coefficient x for drydock bergs seems to indicate that drydocks are potentially very unstable. However, the average height, h av, for a drydock is generally low for those with a high x value, which implies a high measured stability ratio. 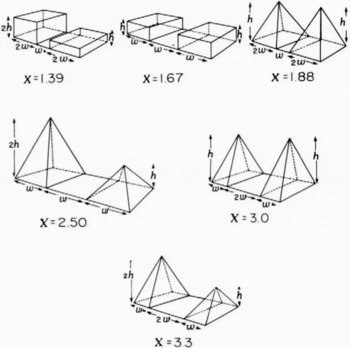 The rationale behind the technique outlined above has been its applicability in the field, where an approximate estimate of stability can thus be determined with a few measurements and some visual observations.

Accuracy is greatly improved if aerial photographs of the berg can be obtained. For example, from a photograph taken overhead, the minimum average width of a berg and its average height may be calculated.

With under-water sonar methods, a fairly good approximation to the value of the under-water fullness coefficient y could be obtained rapidly from four stations around the berg.

One stability parameter that we have taken as constant is the ratio of the density of glacial ice to that of sea-water. Stability increases as the ratio decreases. It has been suggested that up to 10% of the iceberg volume is air. Such a value would have a substantial effect on the stability characteristics of an iceberg. However, it is generally accepted that for Arctic bergs variations in the density ratio of 2% are more probable. Antarctic tabular icebergs are generally non-homogeneous and have a lower mean density that depends on the thickness of the berg. In fact, density increases with depth of these icebergs. Thus, Antarctic icebergs are very much more stable than Arctic icebergs of comparable shape and dimensions. If the ratio of the mean density of an iceberg to the density of sea-water is λ, and if the berg is homogeneous, its critical stability ratio is given by

A rectangular cuboid iceberg, with λ = 0.8, has a critical ratio of 4.9 (compared to the value of 6.5 for a comparable Arctic iceberg). In fact, taking account of the density distribution in a typical Antarctic iceberg would lead to an even lower critical ratio.

I should like to thank Dr James Rossiter of C-CORE for invaluable advice and introducing me to the fascinating study of icebergs.