Water isotopes are important palaeoclimatic tracers. The dependency of isotope content of precipitation on certain climatic parameters is widely used to reconstruct palaeo-data sets: primarily temperatures (Lorius and others 1979), taking into account the linear relation between the deuterium or oxygen 18 content of precipitation and the mean air temperature at the sampling site (Dansgaard 1964), and, further, the relative humidity of air masses which is shown by a simple model (Jouzel and others 1982) to depend on the relation between the two isotopes.

Until now, the only theoretical models developed to explain these relations were based on highly schematic overviews of the dynamical history of isolated air masses and therefore could not take into account the variations in the ocean surface characteristics or in the atmospheric circulation which may occur during important climatic changes. In fact, the only way to include such variations is to proceed to detailed simulations of the two isotopic cycles 1n general circulation models of the atmosphere (GCMA).

The HDO and H2 180 cycles have been modelled in the GCM of the atmosphere developed at the Laboratoire de Météorologie Dynamique (LMD). They follow all the formulations of the basic water cycle of the model {surface evaporation, boundary-layer diffusion, transport,’ convective diffusion, condensation, re-evaporation, precipitation); however, the isotopes are differentiated at each phase change through fractionation processes depending on differences in saturation pressure and molecular diffusivity.

The two critical points of the modelling design were the following: (i) to ensure a consistent transport of all three isotopic mixing ratios, the numerical scheme used for the transport must be chosen very carefully (for example the isotopic mixing ratios must remain absolutely positive), (ii) the parameterization of convective clouds used in the LMD model (Sadourny and Laval in press) does not provide a detailed description of the motion of air parcels. Therefore it does not give information about where and at which temperature condensation actually occurs. Since this information is essential for a proper representation of the fractionation processes, we must make some crude assumptions: we consider that total mixing occurs within the cloud and that the temperature of condensation is also that of the cloud base.

A schematic description of the various kinds of fractionation processes formulated in the model is as follows.

A numerical experiment has been performed with a low resolution version (32 points in longitude, 24 in latitude, 11 levels) of the LMD GCMA under January conditions. Values for the initial conditions for the vapour isotope ratios were chosen to be significantly smaller than the observed values.

We show here partial results concerning the closed system hypothesis for liquid formation, without kinetic fractionation. Figure 1(a) displays the 20- day average simulated 180 content of precipitation which can be compared to the annual mean observed field in Figure 1(b) (IAEA 1981). The planetary-scale structure 1n middle-to-high northern latitudes is realistic and well correlated to temperature gradients. In the tropics, maximum values are in good agreement with observations, but the field has a rather strong variability (correlated to the structure of precipitation), which does not appear on the observed fields perhaps because of the annual mean. Values for Antarctica are reasonable for coastal regions, but too high for the interior; this could be due to the low resolution used, which also yields too high temperatures. 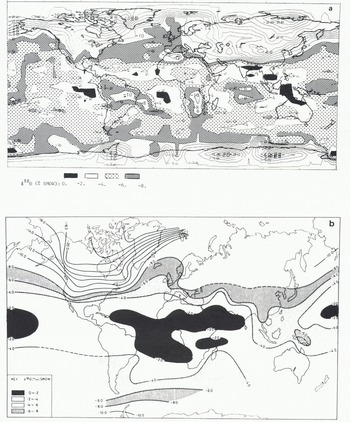 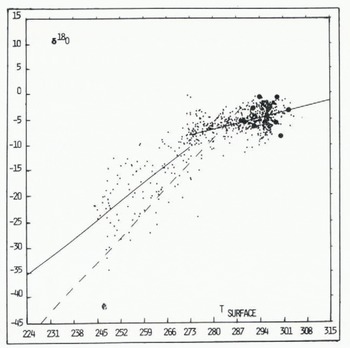 The relation between D and 18O contents of 20-day average precipitation is shown in Figure 3. The high ratios (>−10‰) are in good agreement with the experimental results (Craig 1961) with a realistic dispersion. The lower ratios (<−10‰) are well correlated but with a deuterium excess (δD – 8δ18O) less than observed ones. 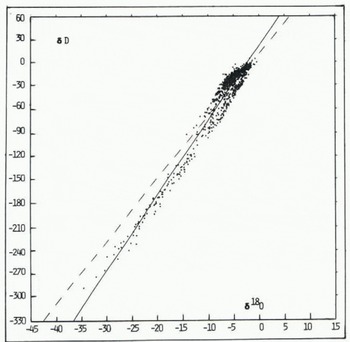 To conclude, the results for the isotopes are in good agreement with the observations except for the ratios at higher latitudes which tend to be too high and associated with low deuterium excess, a defect we want to improve before attempting any palaeoclimatic reconstruction.