We have investigated two 30 m cores at two different spots in the most heavy snow-accumulation regions on Mizuho Plateau, East Antarctica. Marked seasonal variations periodically appear in oxygen isotope records of the cores. We analyzed one core with no trace of snow melting and found it had a complete record showing a yearly change of annual net snow accumulations from 1920 through 1980. The analysis shows that a yearly variation of annual net accumulation (N.A.) has some relations with that of the annual maximum value (δmax) of δ18O and that of the annual amplitude (Δδ) of the δ18O-change in an annual snow layer. Power spectral analyses with respect to the variation of N.A., δmax and Δδ also indicate that there is commonly a predominant periodicity of about five years.

Various environmental problems have been threatening to ruin us, especially recently. Most of them need close study from global viewpoints. Therefore it is very urgent that we find out the past record of change of environment or climate on Earth by means of firn or ice-core analysis in the polar regions. Furthermore, knowledge of annual net snow accumulation and its variation presents important information as to the shrinkage or growth and ice-sheet dynamics of Antarctica, and helps to advance research work on flow models of ice streams.

On Mizuho Plateau of East Antarctica, characteristics of surface-depositional regime have been studied (e.g. Reference Watanabe and SatowWatanabe and Satow, 1988) and core analyses have also been carried out by Japanese Antarctic Expeditions. But the seasonal variations of physical or chemical properties of firn cores cannot commonly be seen, due to the complex interaction of low net accumulation of snow, erosion-accumulation process of surface snow by strong katabatic winds and metamorphism of accumulated snow.

Site S18 is located at lat. 69°01′30′S, long. 40°08′06′E, elevation 618 m. The resultof core analysis at this site is shown in Figure 2(a). We found ice layers and lenses in the core, which show evidence of snow melting and refreezing in summer. As the figure shows, density of mixed snow and ice layers is much higher. Ice layers in the core do not always coincide with summer high peaksin δ18O profile.

Figure 3 shows two sketches of stratigraphy from pit studies at site S16 (554 m a.s.l.) near S18, made in January 1981 and one year later. The pits were adjacent to each other, on a site with characteristics of a percolation zone in an accumulation area (Paterson, Reference Paterson1981). There are some disagreements between ice layers and maximum peaks of δ18O seasonal variations, indicating danger in assuming that almost every ice layer represents a summer surface in a percolation zone. 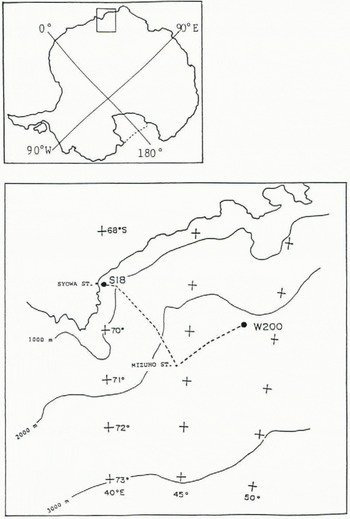 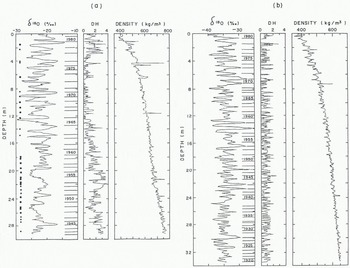 One characteristic in this core shown in Figure 2(a) is that snow layers mixed with many ice layers have large values of hoar level at depth (Watanabe, Reference Watanabe1978a). This is because growth of hoar at depth in snow is related to the temperature gradient and the cut-off of vertical movements of vapour in the snow. Using features of the δ18O profile, depth hoar level, density and stratigraphy, summer layers could be identified and annual layers determined, thus yielding an annual dating of the core. In the right side of δ18O column in Figure 2(a), the chronology of the core is shown from 1942 to 1980.

Site W200 is located at lat. 69°35′26′S, long. 48°50′10′E, elevation 2165 m. Figure 2(b) shows the result of the core analysis at W200. We can see no melting phenomena such as ice layersor ice lenses in the visual stratigraphy. Snow density was 400 kg m−3 at the upper part ofthe core, gradually increasing with depth. But its rate of increase was lower and the amplitude of density variation was smaller compared with the S18 core.

The δ18O profile shows typical seasonal variations. Judging by the features of δ18O profile, depth hoar level, density and stratigraphy, we can easily determine annual layers, and decide a yearly dating of the core. The chronology from 1920 to 1980 of the core is shown in the right side of δ18O column in Figure 2(b).

There is little correlation between oxygen isotopie composition (δ18O), depth hoar level (DH) and snow density (Δρ: the deviation from regression density-curve) of 368 samples in a 30 m-long core at S18.

As stated above, annual layers were determined and the year-to-year variation of snow accumulations at site W200 was also obtained for 61 years from 1920 to 1980 (Fig. 4(b)). The upper right-hand graph in this figure, like that in Figure 4(a) indicates results from stakes; the coefficient of correlation between the two graphs was 0.4 for 13 years (1968–80). The mean annual net accumulation at W200 was308 kg m−2, standard deviation 97 kg m−2.

We examined the relationships between δ18O, depth hoar level (DH) and density (Δρ: deviation density) of 445 samples in the 30 m core. The coefficient of correlation between DH and Δρ was -0.43, and other mutual relations were much lower. 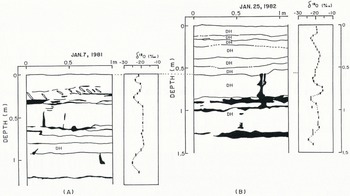 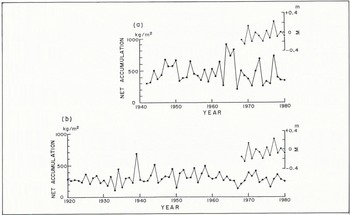 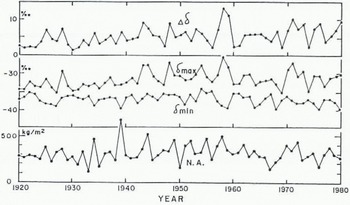 For the purpose of getting dominant periodicities of variation of the annual net accumulation at W200, spectral analysis by the Maximum Entropy Method (MEM) was applied to a series of 61 year values in 1920–80. MEM has an advantage of high resolution for short series (e.g Reference Ulrich and BishopUlrich and Bishop, 1979; Hino, Reference Hino1977). Spectral distribution for the annual net accumulation (N.A.) is shown in the lower column of Figure 6, together with that for δmax variation (middle column) and Δδ variation (upper column). In annual net accumulation, the predominant peaks 1 and 2 show 4.7-year and 2.5-year periodicities respectively. Peak 1 in δmax spectral distribution shows a 4.7-year cycle. In Δδ distribution, peaks 1, 2 and 3 show respectively 7.4, 4.8 and 2.3-year periodicities. There is a common periodicity of 4.7-4.8 years. We have not yet verified the existence of other glacio-meteorological phenomena with similar periodicity, but Bryazgin (1986) stated that 5–6 and 19–22 year cycles appeared in annual precipitation at some stations in Antarctica. Peak 2 in N.A. corresponds to peak 3 in Δδ. 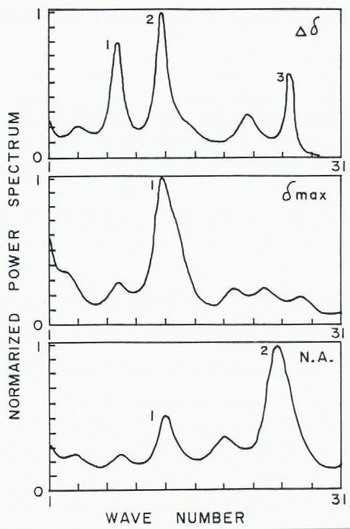 With the onset of summer, the area of open sea increases, the distance from open sea to the bore siteon the ice sheet is shorter, and δ18O values of snowfalls in summer become higher. Actually, the seasonal variations of new snow at Syowa Station near the coast, and of drifting snow at Mizuho Station on the plateau (about 260 km from the coast), is controlled not only by seasonal variationsof atmospheric temperature, but also by changes in distance from the coast to the open sea (Reference Kato, Watanabe and SatowKato and others, 1978). The δ18O maximum value in summer affects strongly the annual amplitude of δ18O variation (Δδ). On the other hand, some relationship is likely between distance from open sea m summer and change of meteorological circumstances, for example, activities of cyclones over the Southern Ocean. In fact, we have had much heavy snow and sampled δ18O rich snow at Syowa Station during the approach of cyclones (Reference Kato, Watanabe and SatowKato and others, 1978).

The reason why δ18O minimum value (δmin) has low correlation with the other factors may beexplained as follows. On the ice sheet, where the bore sites are located, the prevailing wind with east or south-east direction is blowing constantly throughout the year (Watanabe, Reference Watanabe1978b). Therefore δ18O poor snow from far inland is transported and deposited by the wind. So the δmin value becomes lower and more complicated than that of original snowfalls at the site.

Cores from high accumulation regions on Mizuho Plateau, East Antarctica, with annual layers for 39 and 61 years, were distinguished by seasonal isotopie cycles, together with depth hoar level of firn, deviation of firn density and stratigraphie features. We show that, in percolation zones, not every ice layer or ice lens indicating melting corresponds to a summer surface. The annual net accumulation and its year-to-year variations obtained from core analysis show a good correspondence to those from the measurements by stake method.

It is remarkable that the scatter of δ18O values and the average of δ18O annualamplitudes (δmax-δmin) were exactly the same for both cores, while δ18O values differ by 12.3‰. For W200-core, there is a correlation between firn density and depth hoar level. A year-to-yearvariation of annual net snow accumulation (N.A.) at site W200 was obtained in 1920–80. This variationhas a little correlation between that of the δ18O maximum (δmax) and that of the δ18O annual amplitude (Δδ) in an annual firn layer. Power spectral analyses with respectto the year-to-year variation of N.A., δmax and Δδ indicate a common periodicity of about 5 years.

Similar comparisons as mentioned above need to be made with other sites that have long records of seasonal δ18O variations and annual net accumulations in many different regions of Antarctica, yielding more information on climatic changes over the Antarctic ice sheet.