Prediction of an Iceberg Drift Trajectory During a Storm

A numerical model is presented for predicting iceberg drift trajectories from known or derived information regarding iceberg characteristics and the environmental forces affecting the motion of an iceberg. The validity of such a model is studied by comparing predicted and observed trajectories of icebergs near Saglek, Labrador, during a storm on 21–22 August. 1972. At this time, iceberg positions (determined by radar), winds, and currents were monitored as part of an oceanographic study, conducted by the Faculty of Engineering and Applied Science, Memorial University of Newfoundland. The comparison between observed and predicted iceberg drift trajectories is good when the characteristics of the iceberg are assumed to be those of a mediumsized non-tabular iceberg. In order to appreciate the effect of wind and current forces on the drift of the iceberg, several trajectories arc plotted in which various environmental forces are excluded. From this study, it is evident that a good prediction of an iceberg drift trajectory is only possible if rather detailed information is available on the current and wind field.

Renewed interest in the detailed movements of icebergs began with the advent of oil exploration on the continental shelf off eastern Canada, where their occurrence presents considerable hazards to drilling operations and shipping.

On the other hand, icebergs may possibly be a source of fresh water if they can be towed from the Antarctic to arid parts of the world. Whether an iceberg is to be used or avoided, it is important to learn about its drift under the influence of environmental forces such as winds and currents.

In this paper, an iceberg drift model is presented which considers the motion of an iceberg due to wind and water drag forces, the Coriolis force, the pressure-gradient force resulting from the sea-surface slope, and the water acceleration. The validity of this model can only be studied by comparing predicted and observed iceberg drift trajectories when data on wind and currents are collected simultaneously and used as input to the model.

Such an opportunity presented itself during a storm on 21–22 August 1972, near Saglek, Labrador, where the Memorial University of Newfoundland (MUN) was conducting an oceanographic study in collaboration with the Bedford Institute of Oceanography (BIO). During the study, iceberg positions were monitored with the help of a land-based radar at Saglek, while current and wind data were gathered by CSS Dawson, provided by BIO. The predicted iceberg drift trajectory was close to that observed for a specific iceberg in this area. A detailed account of activities during this study is given by Allen (1972).

Iceberg motion is the net result of forces which vary with time and space. Some of these forces are due to gravity, pressure gradient, wind drag, water drag, Coriolis effects, waves, and swells. Since this study is mainly concerned with the horizontal movement of icebergs, only the horizontal components of these forces are considered. Wave and swell forces are neglected in this study as their magnitudes in the horizontal directions are unknown in comparison to other forces. The mathematical model takes into account the significant environmental forces due to water drag, wind drag, Coriolis acceleration, and sea-surface slope (pressure gradient).

The drag force due to the water is proportional to the square of the relative velocity of water with respect to the iceberg. The constant of proportionality depends upon the size and shape of the under-water portion of the iceberg. Ocean currents represent a complicated mixture of different types of aperiodic and periodic water movements, a few of which are the geostrophic current, the wind-driven current, the inertia current, and the tidal current. The distribution of the magnitude and direction of the various current components varies with time, depth, and location. For the purpose of modelling iceberg drift, the water column is divided into two layers, and the water drag force is then obtained as the vectorial sum of the drag forces which are expressed in terms of relative velocity of the current with respect to the iceberg in each layer.

The concept of added water mass is introduced to account for inertial drag due to the acceleration of the water around an object, and the object behaves as if a mass were added to it. The added mass can be determined from the potential flow theory, and it has been assumed to be equal to half of the mass of the iceberg.

The equations of motion taking all the above-mentioned forces into account are written below in the component form:

where the symbols used are defined above.

If the parameters related to the iceberg are known, the above set of equations may be integrated to obtain the response of the model in the form of the iceberg velocity and position, provided the current and wind data are supplied as the forcing function (or input to the model). Since the set of differential equations are coupled and nonlinear, it is expeditious to integrate them with the help of a digital computer, and the fourth-order Runge Kutta method is employed for this purpose.

Since the mass, area, and drag coefficients of the icebergs under study are not known, these values are chosen from the range quoted in the literature. Thus, the cross-sectional area and mass data for the iceberg under study are given the values shown in Table 1, which was compiled by the U.S. Coast Guard from observations made over a number of years to establish seven classes of iceberg (Mountain 1980), and the values of the drag coefficients in water and air are assumed to be 1 and 1.5, respectively, regardless of the size and shape of the iceberg.

Table I Table I. Iceberg Characteristics (Mountain 1980 with acknowledgement to R.Q. Robe)

A more detailed discussion of this can be found in E1-Tahan (1980).

Input to the Model

As mentioned above, the icebergs were tracked by radar at Saglek while the currents and wind speeds were recorded simultaneously by current meters and C S S Dawson, respectively. Figure 1 shows the trajectories of five icebergs and the locations of the current meters A,B,C, and D. At each of these four locations, current meters were installed at depths of 13 m (A1,B1,CI,D1) and 75m (A2,B2,C2,D2) below the sea surface, and three additional meters were installed at locations A, B, and C at depths of 165 m (A3), 146 m (B3), and 176 m (C3), respectively. The data obtained from these current meters were presented and analysed by Holden (1974), who concluded that the current near the surface oscillated with the tidal period of 12.5 h before the storm of 22 August 1972 and with the inertial oscillation period after the storm. 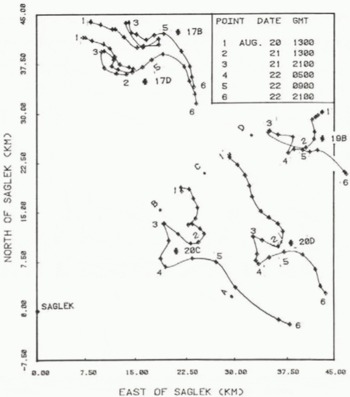 The latitude of Saglek is 58°9’ N. and the depth of the boundary layer D is calculated to be 39.7 m which is approximately equal to the depth of the mixing layer as is evident from the contour lines of measured salinity-temperature depth data (Allen 1972) . The net water mass transport, Sx and Sy , in the easterly and northerly directions are given by Neumann (1968) as :

This is a remarkable result for it shows that the total water-mass transport is to the right of wind shear-stress direction in the northern hemisphere and to the left in the southern hemisphere. The net effect of wind-driven currents on the motion of an iceberg is to integrate the drag forces at different levels in the boundary layer. In this paper, it is assumed that the boundary layer has a uniform velocity such that the net water-mass transport due to wind effects is equal to that given by Equations 9 and 10, and the average velocity components are Ū w = 0.225 V 0 and V̄ w = 0. Using Equations 7 and 8, the velocity components at 13 m depth are U w = 0.358 V 0 cos (-13.9°) and V w = 0.358 V 0 sin(-l3.9°). Hence, we obtain a factor, equal to 0.628, which is the ratio of the magnitude of the average velocity in the boundary layer to that at 13 m depth, and the difference in their directions is 13.9° (clockwise). On the basis of this discussion, the average water velocity components (U 1,V 1) in the boundary layer are obtained by the following expression which effectively subtracts the geostrophic current from the surface current, rotates the resultant by 13.9° in the anti-clockwise direction, multiplies it by a factor of 0.628, and adds the geostrophic velocity components.

The surface wind velocity and direction were obtained from the log books of C S S Dawson which was in the area gathering other oceanographical and meteorological data. 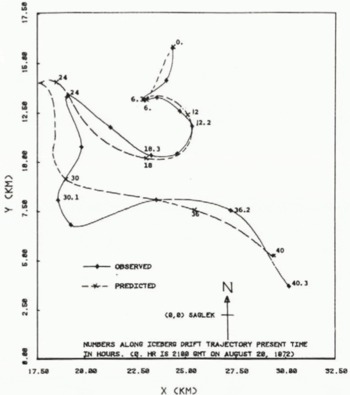 Fig. 2 Predicted and observed trajectories of iceberg 20C during the storm which passed over the Labrador Sea on 21–22 August 1972. 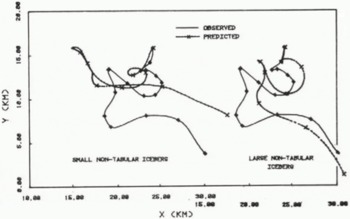 Fig. 3 Effect of iceberg size on the predicted trajectory. 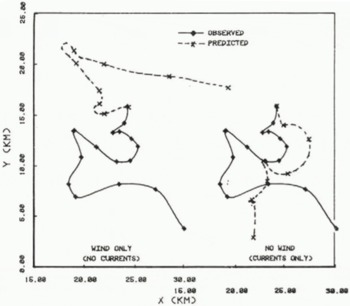 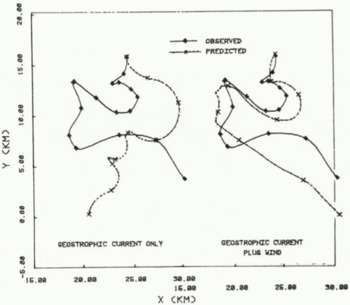 Fig. 5 Iceberg drift in geostrophic current with inclusion and exclusion of wind. 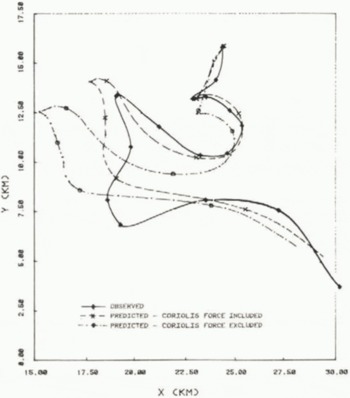 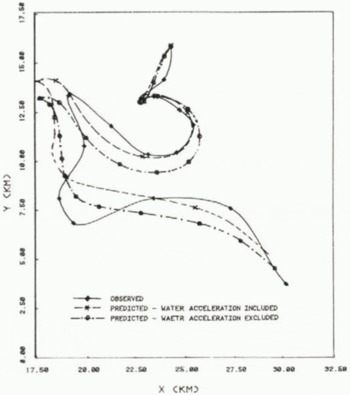 Finally, Figure 8 shows the difference between the trajectories when current data at 13 m depth are used for the average current velocity in the boundary layer as opposed to using Equations 11 and 12. As is evident from the results, the current data at 13 m depth as input to the model do not give a good prediction of the iceberg drift, and these data along with the data at greater depths have to be used to estimate the wind-generated currents in the boundary layer. 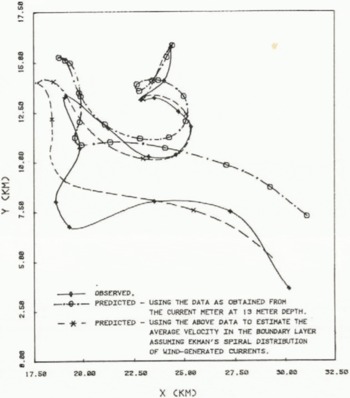 Fig. 8 Effect of considering the distribution of the wind-generated current velocity.

A numerical model for the iceberg drift is presented, and the model is used to predict the drift trajectory of an iceberg using current and wind data from the field. The trajectory of only one iceberg is predicted because this particular iceberg (20C) drifted close to the installed current meters. The predicted trajectory compares well with the observed trajectory when the iceberg parameters are assumed to be those of a medium non-tabular iceberg (Table I). The trajectories of other icebergs are disturbed by the storm in a similar manner as shown in Figure 1, and the deviations from the regular drift trajectories start and stop at about the same time. The direct action of the wind is evident from the fact that the icebergs are moved back and forth as the wind direction changes due to the passage of the storm centre through the area. The indirect action of wind on the drift of icebergs is important because of the wind-generated currents and inertial oscillations in the boundary layer.

In this paper, we have shown that the physics of the iceberg drift model are known to the extent that a good prediction of an iceberg trajectory during a storm can be made provided detailed current and wind data are available as input to the model.

The authors are grateful to Dean R.T. Dempster, Faculty of Engineering and Applied Science, Memorial University of Newfoundland, St. John’s, Newfoundland, for making available the iceberg data and to Dr Miles McPhee of the U.S. Army Cold Regions Research and Engineering Laboratory, Hanover, N.H., for his discussion. The help of many others is also gratefully acknowledged in gathering all the data which led to successful completion of this work.