Several factors contribute to the natural drift of an iceberg, and among these, currents play an important part on the translation and rotation. Some information exists on surface currents in sub-Antarctic areas, but an iceberg behaves as a current integrator due to its draught and it is assumed to drift under the action of a “mean” current. In order to measure the mean current, five drogued buoys were launched in July–August 1979. These buoys were located by Argos satellite transponders. The drift of the buoys gives the mean current from 0 to 230 m depth in the Southern Ocean. Some corrections must be made on the measured drifting speed of the drogued buoys, due to the influence of the wind on the above-water portion of the buoys.

It is important to distinguish between the contribution of the ocean current to the drift of an iceberg and that of other factors such as wind, swell, and waves. An iceberg behaves as does a current integrator over its depth, and the main driving force for the movement of an iceberg is the integrated effect of the current. If the draught of a typical Antarctic tabular iceberg is assumed to be 230 m, then the speed and heading of an iceberg will approximate the mean direction and mean speed of the current from 0 to 230 m depth.

Surface currents in the Southern Ocean are shown in Figure 1. Deep currents are not well-documented and further investigations are needed to extend our knowledge of them. The use of fixed current meters does not give satisfactory results, since information is obtained on the local behaviour of currents only. A simple method of obtaining an approximate Lagrangian movement, which is basically what was required, was to use drogued buoys, with drogues made up of several floating anchors. Five buoys were launched in July–August 1979, thus equipped to determine the average of the currents from 0 to 230 m depth. This paper presents the drift track analyses of these buoys. 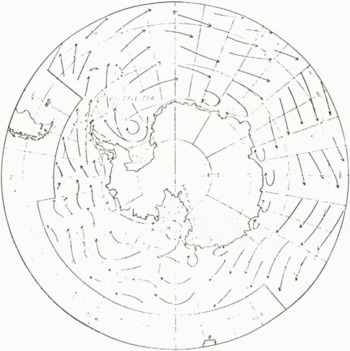 Fig. 1. Generalised surface water movement in the Southern Ocean, from the Antarctic pilot (Great Britain. Hydrographer of the Navy 1974).

The buoys, four of which were still working well eight months later, were launched in July–August 1979 and transmit information by means of the Argos system. This system uses two satellites which receive information transmitted by the beacons of the buoys. The collected data are retransmitted to a computation and processing centre, which distributes them to users. The buoys are equipped with a timer which switches off the emission from the beacons for periods of four days in order to reduce the processing costs and to increase the life of the batteries. The mean error of position is ≈ 480 m, with a maximum error of 2.8 km. It was important that the buoys should be lightweight and portable with shock-resistant hulls, so they were made of polyester strengthened with fibre glass (Fig. 2). Water tightness was ensured by polyurethane foam. The Argos transmitter works at temperatures ranging from −30 to +40°C, and the transmitting antenna was omnidirectional and protected by a hood. The total weight of the equipped buoy was about 80 kg. The planned battery life of the buoys was two years. 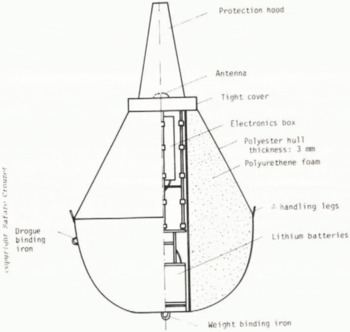 The main problems in setting up the drogues were as follows: the drogue had to be constructed in such a way that the effect of wind and swell on the above-water part of the buoy was minimal, the drogue had to remain vertical and taut however the velocity and direction of the current varied, and the repetitive stresses at the junction between drogue and buoy had to be kept to a minimum. To resolve these problems, a drogue consisting of wired cylinders was chosen. These cylinders were attached at intervals of 5 m on a wire which was 200 m long. They offered a very high drag coefficient. The drogue was kept vertical and taut by means of an immersed float and a 50 kg chain used as a weight at the bottom of the drogue. The heave was damped with a catenary curve made of a rope provided with 27 cylindrical floats attached at one side of the immersed float and at the buoy on the other side (Fig. 3). The buoy and the drogue were as independent as possible. 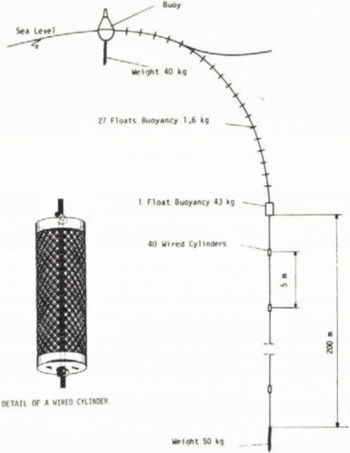 Launching of the Buoys

The five launching locations of the buoys were:

These locations were chosen in order to cover the current field from 45°S. to 55°S. Launching a buoy involved several steps. The buoy, equipped with its drogue, floats, and chain, was arranged on the deck of the ship. When the ship stopped, the buoy was lifted into the water by a crane and when the drogue was fully immersed the 50 kg weight was cast overboard. Unfortunately, the first buoy (3 009), launched at 45°S., broke down on the day following the launch.

The positions of the buoys are transmitted every four days, and are plotted on a Mercator projection chart as well as on a bathymetric chart of the south-east Atlantic and south-west Indian oceans to show the drift in relation to bathymetric features. The last recorded positions of the four functioning buoys were:

The principal features of the trajectories of the buoys may be seen in Figure 4 and are as follows (the Antarctic convergence plotted in this figure is approximate, corresponding to its mean position in winter, as it varies seasonally and from year to year): 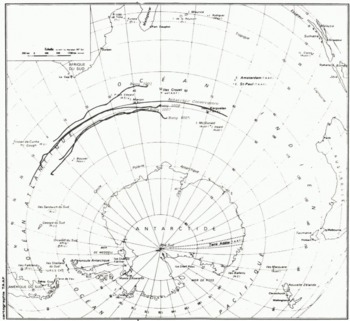 The mean heading of the four buoys between 5°E. and 40°E. was as follows: 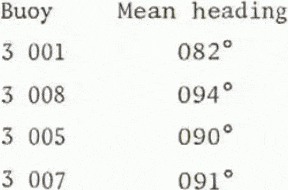 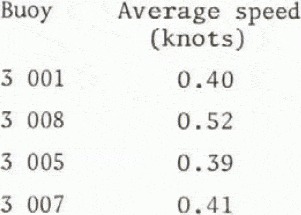 The mean zonal speeds between 5°E. and 40°E. were as follows:

Figure 6 shows the average zonal current speeds compared with those obtained from drifting buoys launched in 1976 by South Africa (Harris and Stavropoulos 1978). 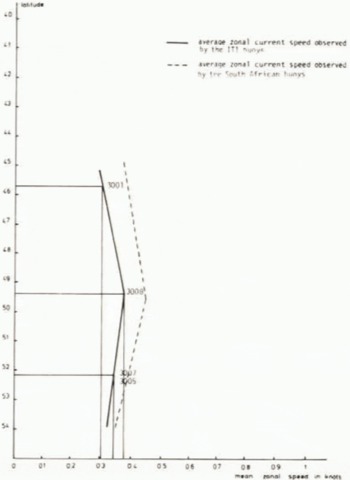