During the Norwegian Antarctic Research Expedition 1978–79, two experiments were carried out to measure flow around icebergs. Drogues were equipped with surface markers constructed to drift with the flow at various levels down to 260 m. They were tracked by a helicopter and a Motorola positioning system. As expected, the surface-layer (0 to 20 m) flow was wind-induced, but even at greater depths a relative motion of a few cm/s between the water and the iceberg was measured. Such measurements are important for the determination of drag on icebergs, and for melting and erosion processes.

Publication No . 25 of the Norwegian Antarctic Research Expeditions (1978–79)

Recently, interest in the behaviour of icebergs in the ocean has increased, not only because of the possibility of using them as a fresh-water source but also because of more general questions. These include the reaction of icebergs to wind and currents, and the influence of an iceberg on its environment: thus icebergs have been used to determine vertically-integrated currents in the upper ocean (Vinje 1980, Tchernia and Jeannin 1980), and they may supply the Southern Ocean with water rich in nutrients by causing upwelling (Neshyba 1977).

In order to understand more fully the iceberg-ocean interaction, experiments were conducted near Kapp Norvegia in the Weddell Sea, Antarctica, to measure the flow around icebergs.

The relative flow around an iceberg was measured using drogues equipped with surface markers (Fig. 1). Each drogue consisted of a 6 m2 reinforced plastic sail maintained in a vertical position by means of a weighted rod and supported by a wooden mast. The sail was connected to a 1 m2 surface float by a thin dacron fishing line. The float was made of polystyrene foam sandwiched between a cardboard support on which was painted a large number for visual identification. The lines connecting the sail and the surface float were adjusted so that the flow could be measured at different depths. The drogues were deployed from the ship, and the positions of release relative to the iceberg were determined using ship’s radar. Simultaneously a helicopter was used to install two transponders of a Motorola positioning system on the iceberg. The positions of the transponders on the iceberg were marked I and II (Figs. 2 and 3). The subsequent positions of the drogues were then determined by a helicopter carrying a Motorola receiver. From the helicopter, each drogue was identified by its number and the helicopter remained above the drogue until the signals giving the distance from both Motorola transponders were received. Thus two circles with known radii around positions I and II could be drawn and the position of the drogue was at one of the two intersections. Which one was often obvious, but in some cases it was difficult to decide. Therefore, during the experiment, a rough sketch was drawn by an observer in the helicopter. In this way the positions of the drogues were determined two to four times. It should be noted that a different technique (ship’s radar) was used to determine the first position of the drogues. Since this technique is believed to be less accurate, the first velocity vector is probably less reliable than the rest. 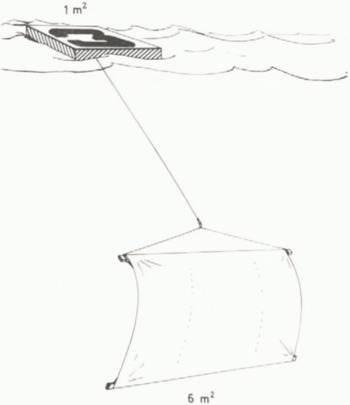 Fig. 2 (a) Positions of drogues relative to the iceberg for experiment A. The length of the arrows indicates the speed. Three surface drogues which were deployed upwind from the iceberg remained in a cluster during the experiment and are therefore indicated by one arrow. At the same side, but closer to the iceberg, four drogues were deployed at 10, 30, 80, and 130 m. At the north-east side of the iceberg, drogues at 0 and 80 m are shown, and at the south-west side drogues were used at 0, 30, 80, and 260 m. The velocity vectors were determined by helicopter positioning of the drogues. 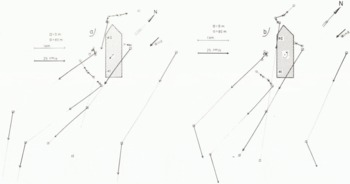 Two experiments were carried out, one on 27 February 1979 (experiment A) and the other on 28 February 1979 (experiment B). The two icebergs were of similar size, 0.4 and 0.7 km2, both rising close to 30 m above the sea surface and with an estimated draught of 260 m. Experiment A was designed to investigate the vertical structure of the current near the iceberg. Drogues were submerged at depths of 0, 10, 30, 80, 130, and 260 m. The results are shown in Figure 2a. The wind direction at the beginning of the experiment is indicated by an arrow. Most surface drogues drifted in the direction of the wind at about 0.2 to 0.4 m/s. The same flow was observed at a depth of 10 m, but not at 30 m. This indicated that the surface friction layer was between 10 and 30 m deep. At depths of 80 m and lower the currents were weaker. The deep drogues at the long side of the iceberg showed almost no relative motion and appeared to be caught in a wake. At the short sides of the iceberg the deep relative current was of the order of 0.1 m/s.

In experiment B, the horizontal velocity distribution was studied. Based on the experiences of experiment A, it was decided to use-surface drogues to represent the strong current in the upper 20 m and drogues at 80 m to represent the deep flow. The results arc shown in Figure 3a. The surface current was approximately in the direction of the wind. The wind turned from north to west during the experiment, and the corresponding turning of the surface current is clearly demonstrated in Figure 3. The drogues at 80 m indicated again that a considerable mass of water was trapped in a wake at the sides of the iceberg. The deep flow at the short sides of the iceberg showed clockwise circulation relative to the iceberg.

In experiment B a satellite-positioning system on the iceberg determined its absolute position. Six fixes were obtained during the experiment consistent with movement of the iceberg to the south at a speed of about 5 cm/s. This is indicated by an arrow at the centre of the iceberg in Figure 3.

3(b) Absolute velocities (rotation of the icebergs)

Figure 3a and b also indicates a wake at the sides of the iceberg. The movements of the 80 m-level drogues at the short sides of the berg were clearly related to the iceberg since such large horizontal velocity shear is not observed in the open ocean.

It was observed that the relative velocities between the icebergs and the water, even in the sub-surface layer, were surprisingly strong. Experiment A revealed velocities of the order of 0.1 m/s down to 260 m.

The two deep drogues at the short sides of the iceberg in experiment B showed an interesting feature. One would expect the counter-clockwise rotation of the iceberg to induce a counter-clockwise circulation in the surrounding water through friction. This frictional influence would decrease with increasing distance from the iceberg. Thus, the picture shown in Figure 3a seems plausible: the drogues show a clockwise circulation relative to the iceberg. However, in Figure 3b the rotation of the iceberg is subtracted and the deep water around the iceberg circulates clockwise. That is, during the period of observation the iceberg and the surrounding deep water rotated in opposite directions! Clearly, the simple frictional model mentioned above where a steady rate of rotation has been assumed needs some correction. There are at least two possible explanations. First, the observation period was not long enough to conclude that the berg was in steady rotation. Thus the observed clockwise deep-water flow may be explained by a recent clockwise rotation of the berg. Secondly, the observed motion was obviously related to the iceberg, and if we assume that the observed counter-clockwise rotation was steady then we must seek an explanation of the phenomenon with the iceberg as a driving force. The temperature, salinity, and density curves about 1 km from the iceberg are shown in Figure 4. The temperature was about 0.4°C above the freezing point in the surface layer. Therefore some melting may have occurred giving a distribution of relatively fresh and light water near the iceberg. At 80 m depth, say, the pressure near the iceberg would then be lower than in the surrounding water, and the resulting horizontal pressure force would be driving water towards the iceberg in the lower layer. Under the influence of the Coriolis force this flow would be deflected to the left and the ultimate steady-state balance gave a clockwise circulation as observed. 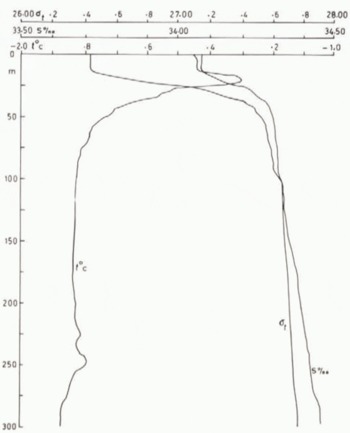 Fig. 4 Temperature, salinity, and density (σt) curves near iceberg in experiment B.