The amount of acidity in precipitation has been measured in heavy-snowfall regions facing the Sea of Japan. The average pH value of precipitation measured throughout the year at Nagaoka was 4.80 during 4.5 years, 1987–92. During winter the pH value is lower and electric conductivity higher. The spatial distribution of chemical components in new-fallen snow was studied along a 55 km-long sampling route. Results from four surveys showed that acidic snows have average pH values of 4.63–4.90. From the distribution of anion and cation concentration in new-fallen snow, it is concluded that strong northwest monsoons during winter bring an abundance of snow with salt components and many non-salt components from the Sea of Japan and also, possibly, from the Asian continent.

Acid precipitation is one of the serious social problems in China as well as in Europe, North America and Canada. The survey of acid precipitation has begun in neighboring Korea and China (Reference KimKim, 1991; Reference QuanQuan, 1991). The serious environmental damages suffered directly from acid precipitation have not yet been reported in Japan, though acid rain has been observed also in Japan (Reference HaraHara and others, 1990). It snows heavily, especially on the coast of the Sea of Japan in winter (December-March). However, the acid properties of snow in this area have not been investigated in detail; therefore the chemical features of snow have been analyzed.

At Nagaoka city in Niigata Prefecture, measurements of acid precipitation have been carried out throughout the year. A precipitation sampling bottle was regularly replaced every day. Nagaoka is located at 37°26′N, 138°54′E and 65.2 m a.s.l. In the average year, Nagaoka is covered with snow from December to March. The average maximum snow depth in winter has been about 140 cm for the past several decades.

In winter, the spatial distribution of acid snow has also been studied. Figure 1 shows the location of the observation area. The surface-snow samples along an “investigation route” were gathered in rinsed bottles. The chemical characteristics of precipitation in heavy-snowfall areas have been examined from these snow samples in my home laboratory. 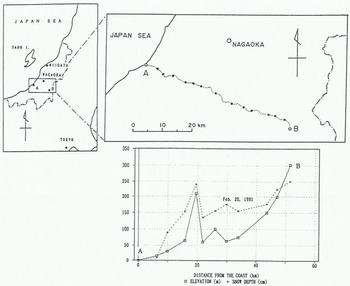 Fig. 1. Location map showing Nagaoka and the “investigation route” where snow was sampled. The lower part shows two profiles of elevation (m) and of snow depth (cm) along the route on 20 February 1991.

Acidity Measurements in Precipitation at Nagaoka

Figures 2 and 3 show the change of pH and EC in precipitation at Nagaoka during the period December 1987-March 1992. The total number of samples over four years and five months was 705. A typical seasonal variation of pH can be seen, especially in 1989, showing lower pH values in winter and higher pH values in summer. 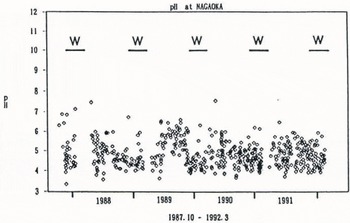 Fig. 2. pH variation in precipitation at Nagaoka during a period from October 1987–March 1992. “W” indicates a winter period, December–March. 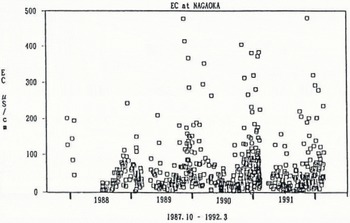 The ratios of Na+ to Cl− concentrations are almost the same values as for sea salt, and these concentrations become higher in winter. When the northwest seasonal wind blows across the Sea of Japan where a warm current runs northward, a large amount of moisture is absorbed into the air during winter. As a result, this moisture precipitates as heavy snowfall in the regions facing the sea. Therefore, the high values of EC and ion concentration in snow during winter are caused by the containment of lots of sea-salt composition brought by the strong seasonal wind blowing toward Japan.

To examine the spatial distribution of chemical features of snow, specimens of fresh snow were gathered along an investigation route extending for 55 km from the coast towards the inland, as shown in Figure 1. The elevation of this route rises from sea level at the coast to 300 m a.s.l. towards mountain ranges in the central part of Japan, with a hill along the route (Fig. 1). The depth of snow is closely related to the elevation, as shown in measurements for 20 February 1991 (Fig. 1).

The specimens of new snow were collected as follows. Following periods of uninterrupted snow, a freshly despoited snow layer was divided into an upper layer and a lower layer, which were sampled separately. Figure 4 shows examples of four analyses: A, 23 January 1990; B, 8 January 1991; C, 20 February 1991; and D, 22 February 1992. In each case the depth of new snow was 10–20 cm. 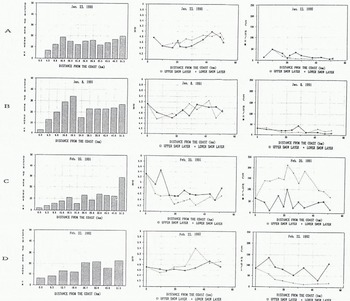 Fig. 4. Distribution of snow depth (cm), pH and EC (μS cm 1) of new snowfall along the “investigation route”. A, B, C and D show measurements from 23 January 1990, 8 January 1991, 20 February 1991 and 22 February 1992, respectively. The left end of each graph is the coast (A in Fig. 1) and right end is furthest inland from the coast (B in Fig. 2). Solid lines in pH and EC variations indicate upper-layer values, and chain lines are lower-layer values in a new-snow layer.

Ion Composition in Example B, 8 January 1991

where α is 0.119, expressed in equivalents per litre. In the same manner, nss-K+, nss-Mg2+ and nss-Ca2+ were also calculated, using a to be 0.021, 0.226 and 0.043, respectively. The distribution of non-sea-salt ions was almost uniform (Fig. 5C1, Dl, C2 and D2). Only nss-Ca2+ had a higher value in the upper snow at the farthest point inland from the coast (Fig. 5D1). It is interesting that first-fallen snow has a higher concentration of sea-salt components both at the coastal area and at the area farthest inland from the coast, although the reason is not evident (Fig. 5A2 and B2). No close relation between pH and (NO3 − + nss-SO4 2−) is apparent. 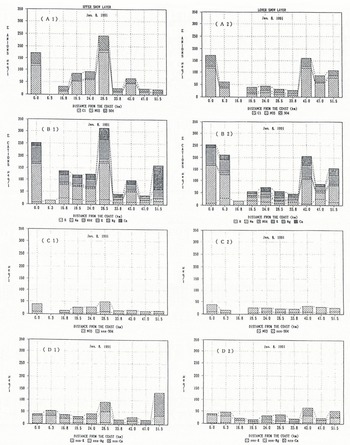 (NO3 − + nss-SO4 2−) concentrations of non-sea-salt components at the coastal area were higher in first-fallen snow (Fig. 6C2). As shown in Figure 6 D1 and D2, non-sea-salt components of cations were much higher (4 times), compared with example B. A striking feature is that nss-Mg2+ concentration was higher in the first snowfall (Fig. 6D2) and nss-Ca2+ was higher in the last snowfall (Fig. 6D1). The reason is not evident, but it must be supposed that there are some influences of long-range transport of Asian desert dust (KOSA) particles (Iwasaka, Reference Iwasaka1990) and pollutant materials from the Asian continent, judging from weather conditions such as strong northwest winds during winter. There is not such a close relationship between pH and (NO3 − + nss-SO4 2−) in this case. 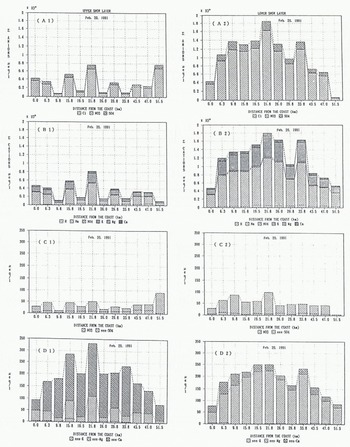 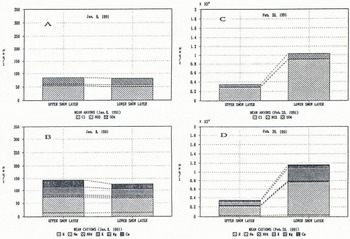 Fig. 7. The mean ionic balances (unit: μeq/l) in new snowfalls sampled along the “investigation route” on 8 January 1991 (A, anions; B, cations) and on 20 February 1991 (C, anions; D, cations). Graphs on left show the upper layer and graphs on rìght the lower layer.

A strong correlation between Na+ and Cl− is observed in Figure 8A in the case of C, showing a sea-water ratio. This figure also led to the conclusion that snowfall in this region is strongly influenced by northwest monsoon in winter. Both nss-SO4 − and nss-Mg2+ were closely related to Na+ concentration (Fig. 8B and C). We can also find the same tendency in the case of B.

This indicates that when the northwest wind blows strongly, many sea-salt components from the Sea of Japan are transported toward Japan, along with many non-sea-salt components from the Asian continent. Reference Ueki and IidaUeki and Iida (1989) reported that the SO4 2− and Cl− concentrations were higher in the snowfall than in the rainfall in summer season in Yamagata Prefecture, north of Niigata Prefecture. In Shimane, also facing the Sea of Japan, the average pH values in winter were 4.4–4.6 owing to the increase of concentration rates of nss-SO4 2− and NO3 − higher than that of NH4 + and nss-Ca2+ (Reference Yamaguchi, Nakao, Tatano, Tanaka, Gomyoda and HaraYamaguchi and others, 1989). These facts do not contradict the result of this study. 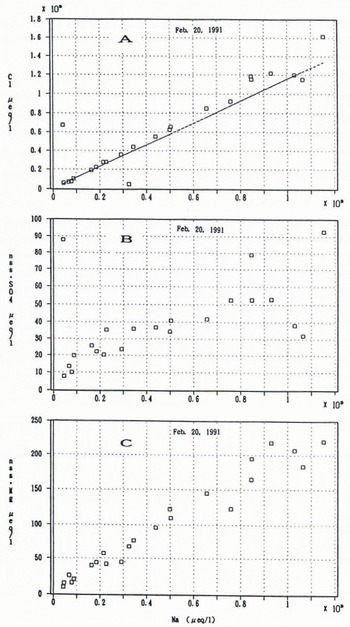 Fig. 8. Cl−, nss-SO4 2− and nss-Mg2+ concentration (A, Β and C) plotted against Na+ concentrations of new-snow samples along the “investigation route” on 20 February 1991 (unit: μeq/l). The straight line in A shows a sea-water ratio.

Acidity in precipitation at Nagaoka has been examined throughout the year for the past 4.5 years. The average pH value is 4.80 and the average value in winter is lower. Electric conductivities in precipitation are higher in winter, and a lot of ionic compounds have been transported to the districts on the coast of the Sea of Japan.

Chemical characteristics of new-fallen snow in winter were analyzed along a line extending 55 km from the coast inland. The results of analyses for four new-fallen snows showed acidic snows in all cases with average pH values of 4.63–4.90. The strong northwest wind during winter has transported snow to Japan with many components of sea salt from the Sea of Japan along with many components of non-sea-salt, possibly from the Asian continent.

New-fallen snow, including many graupels, was lower in pH value and showed higher concentrations of both anions and cations. In this case, nss-Mg concentration was particularly higher, showing the effect of the mechanism of the graupel formation process.

I would like to express my sincere gratitude to my graduate students: Miss H. Okahata, Mrs. K. Kawachi, M. Sato, M. Taga, G. Tanabe, H. Yamakoshi, A. Kumakura, Y. Yamanaka, T. Kobayashi and T. Aoki, for their helpful assistance in the field and the laboratory. Many thanks are due to my wife, Kikuko Satow, for typing the manuscript. This study was partly aided by a Grant-in-Aid for Scientific Research Program (no. 02201103: led by E. Akitaya) of the Japanese Ministry of Education, Science and Culture.