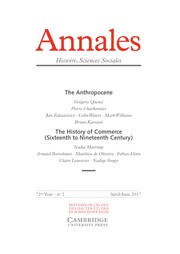 The History of Commerce (Sixteenth to Nineteenth Century)