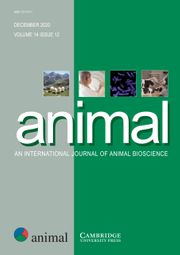 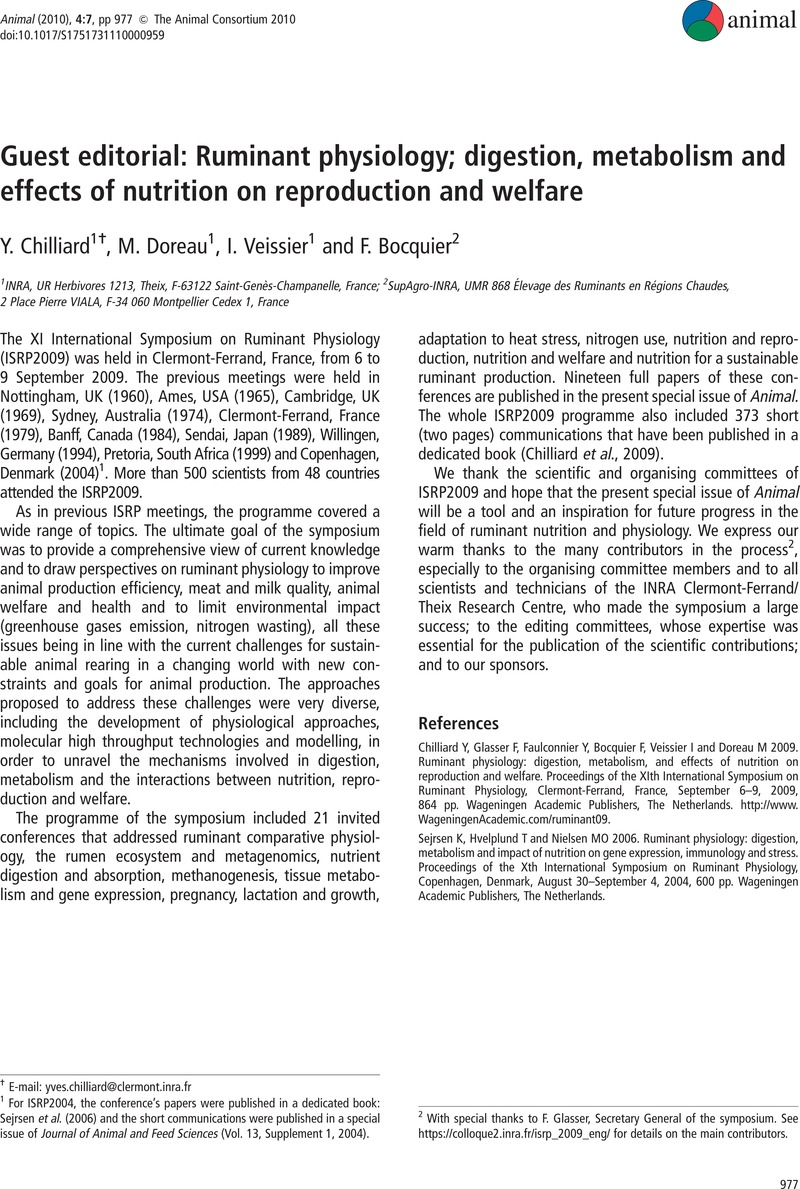 An abstract is not available for this content so a preview has been provided. To view the full text please use the links above to select your preferred format.
Type
Editorial
Information
animal , Volume 4 , Issue 7: XIth International Symposium on Ruminant Physiology (ISRP), 6–9 September, 2009 Clermont-Ferrand (France) , July 2010 , pp. 977
DOI: https://doi.org/10.1017/S1751731110000959[Opens in a new window]
Copyright
Copyright © The Animal Consortium 2010

As in previous ISRP meetings, the programme covered a wide range of topics. The ultimate goal of the symposium was to provide a comprehensive view of current knowledge and to draw perspectives on ruminant physiology to improve animal production efficiency, meat and milk quality, animal welfare and health and to limit environmental impact (greenhouse gases emission, nitrogen wasting), all these issues being in line with the current challenges for sustainable animal rearing in a changing world with new constraints and goals for animal production. The approaches proposed to address these challenges were very diverse, including the development of physiological approaches, molecular high throughput technologies and modelling, in order to unravel the mechanisms involved in digestion, metabolism and the interactions between nutrition, reproduction and welfare.

The programme of the symposium included 21 invited conferences that addressed ruminant comparative physiology, the rumen ecosystem and metagenomics, nutrient digestion and absorption, methanogenesis, tissue metabolism and gene expression, pregnancy, lactation and growth, adaptation to heat stress, nitrogen use, nutrition and reproduction, nutrition and welfare and nutrition for a sustainable ruminant production. Nineteen full papers of these conferences are published in the present special issue of Animal. The whole ISRP2009 programme also included 373 short (two pages) communications that have been published in a dedicated book (Chilliard et al., Reference Chilliard, Glasser, Faulconnier, Bocquier, Veissier and Doreau2009).

We thank the scientific and organising committees of ISRP2009 and hope that the present special issue of Animal will be a tool and an inspiration for future progress in the field of ruminant nutrition and physiology. We express our warm thanks to the many contributors in the processFootnote 2, especially to the organising committee members and to all scientists and technicians of the INRA Clermont-Ferrand/Theix Research Centre, who made the symposium a large success; to the editing committees, whose expertise was essential for the publication of the scientific contributions; and to our sponsors.

1 For ISRP2004, the conference’s papers were published in a dedicated book: Sejrsen et al. (Reference Sejrsen, Hvelplund and Nielsen2006) and the short communications were published in a special issue of Journal of Animal and Feed Sciences (Vol. 13, Supplement 1, 2004).

2 With special thanks to F. Glasser, Secretary General of the symposium. See https://colloque2.inra.fr/isrp_2009_eng/ for details on the main contributors.

* Views captured on Cambridge Core between September 2016 - 7th March 2021. This data will be updated every 24 hours.