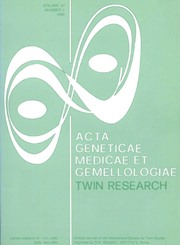 Genetic and Environmental Influences on Reading Achievement: A Study of First- and Second-Grade Twin Children

Previous twin studies provide evidence for genetic contributions to individual differences in reading achievement, but the nature of those genetic effects is uncertain. Reading is a complex behavior composed of many lower-level skills including attention, memory, learning ability, and the integration of auditory and visual information; genetic influences may exert their effects through these lower-level skills. This study evaluated the relationship between auditory-visual integration (AVI) and reading achievement and assessed genetic variance in AVI and reading achievement using the conventional twin model (comparison of identical twins with fraternal twins).

The final sample consisted of 109 first- and second-grade volunteer twin pairs. Of the 89 same-sexed pairs, 57 pairs were classified as monozygotic, 31 pairs as dizygotic, and one remained unclassified; zygosity determination included examination of the intrapair similarity of genetic markers, dermatoglyphics, and/or physical appearance. The childrens' test battery included reading achievement tests (Woodcock Reading Mastery Tests) and the AVI task as well as estimates of general intellectual ability (Vocabulary and Block Design tests from the Wechsler Intelligence Scale for Children-Revised), auditory memory (Auditory Sequential Memory subtest of the Illinois Test of Psycholinguistic Abilities), comparison of auditory patterns, and comparison of visual-spatial patterns. Although the presence of heritable variation in reading achievement has been reported previously [22, 23, 30, 34, 50, 57], it does not account for all of the reliable variance; accordingly, two family questionnaires (Attitudes Toward Education and Moos' Family Environment Scale) and one dealing with first-grade method(s) of reading instruction were included to assess possible environmental factors.

Genetic and Environmental Influences on Reading Achievement: A Study of First- and Second-Grade Twin Children
×

Genetic and Environmental Influences on Reading Achievement: A Study of First- and Second-Grade Twin Children
×

Genetic and Environmental Influences on Reading Achievement: A Study of First- and Second-Grade Twin Children
×
×