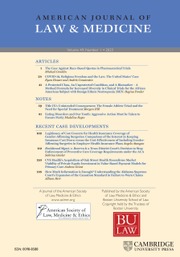 The Food Safety Modernization Act (FSMA) reforms law governing the safety of human and animal foods produced for consumption in the United States. Recognizing the challenges that the proposed regulations would impose on small farms, Congress included an amendment to exempt small farms from the full scope of FSMA requirements. This special treatment and other issues left unaddressed by FSMA, however, present challenges for buyers of small farm products and is inducing a private sector response to these regulatory gaps. This Article reviews the current treatment of small farms under FSMA and explores some key impacts and implications of FSMA on these organizations. Particular consideration is given to the unintended consequences of the Tester-Hagan Amendment and the unaddressed issue of liability for foodborne illness.

The views expressed in this Article are those of the authors and should not be attributed to the Economic Research Service or USDA.

3 See Sarah A. Low & Stephen Vogel, USDA, Direct and Intermediated Marketing of Local Foods in the United States 3, 19 (2011) (noting that farms sold $877 million in 2008 through direct-to-consumer outlets, $2.7 billion though intermediated marketing channels (wholesalers, distributers, grocers, etc.), and an additional 1.2 billion in sales were generated by farms that used both direct-to-consumer and intermediated channels).

13 It is worth noting that the issue of whether FSMA requirements are advancing the general food safety requirements of the U.S. food sector (regulation led requirements), or whether FSMA is simply reflecting the current state of U.S. private firm requirements (market led requirements) varies by industry sub-sector and firm size. By way of example, approximately 90% of U.S. leafy green production is through large-scale farms, which operate under the industry-driven California and Arizona Leafy Greens Marketing Agreements (LGMA). The proposed FSMA requirements on produce production (the “Produce Rule”) are similar in structure but less onerous than LGMA requirements. The standards set by this dominating portion of the industry thus become a baseline norm of expectations and, in the absence of FSMA or other government regulation, are likely to drive marketplace food safety requirements.

17 Social capital describes the relationship resources embedded in personal ties (e.g., groups, or networks within groups) that are useful to the development of individuals, businesses, or organizations in a community. Social capital formation in the context of small farms is discussed in Boys, Kathryn A. & Hughes, David W., A Regional Economics-Based Research Agenda for Local Food Systems, 3 J. Agric. Food Sys's. & Community Dev. 145, 145-150 (2013)Google Scholar.

26 While the requirements do not differ, under the proposed Produce Rule the compliance dates vary depending on the sales of the operation. “Very small businesses,” defined as those with above $25,000 and no more than $250,000 in average sales would be allowed four years from the rule's effective date to adhere to most rule provisions. “Small businesses,” defined as those with more than $250,000 and no more than $500,000 in average annual produce sales, would be allowed a maximum of three years for compliance. Farms with more than $500,000 in sales will be allowed two years to comply with most of the rule requirements. Farms with less than $25,000 in three-year average produce sales will not be covered by this rule. See Standards for the Growing, Harvesting, Packing, and Holding of Produce for Human Consumption, 79 Fed. Reg. at 58,437, 58,467.

For the Preventative Controls rule, firm size differences affect compliance dates, exemptions for qualified facilities, and exemptions based on the risk of firm activities. As it is currently proposed, the definition for “very small business” is a business that has less than $1,000,000 in total annual sales of human food; these firms would be given three years after publication of the final rule to come into compliance. “Small businesses” are defined as those with fewer than 500 employees and would be required to comply with this rule within two years of its final publication. See Current Good Manufacturing Practice and Hazard Analysis and Risk-Based Preventative Controls for Human Food, 78 Fed. Reg. at 3649.

The Preventative Controls for Animal Food rule governs the production of both pet food and animal feed. Under this rule, the proposed a definition of “very small business” is a business that has less than $2,500,000 in annual sales of animal food adjusted for inflation. Under this rule “very small businesses” would be provided three years after the publication of the final rule to become compliant with the new requirements. See Current Good Manufacturing Practice and Hazard Analysis and Risk-Based Preventive Controls for Food for Animals, 78 Fed. Reg. at 64,738.

28 While it is possible for states or localities to increase food safety requirements, the recent trend has instead been for states to relax rules for small food firms through cottage food laws. While they vary widely in their requirements and scope of applicability, these laws are generally designed to allow exemptions from many licensing and inspection requirements for the production and sale of non-potentially hazardous foods from small operators. As of May 2013, fourty-three states had some form of cottage food law. See generally Alli Condra, Harvard Food Law & Policy Clinic, Cottage Food Laws in the United States 4-5 (2013), available at http://blogs.law.harvard.edu/foodpolicyinitiative/files/2013/08/FINAL_Cottage-Food-Laws-Report_2013.pdf.

37 While personal and corporate liability for foodborne illness were not addressed under FSMA, several new categories of criminal liabilities were created concerning failure or refusal to comply with regulations introduced through this law. See Operational Strategy for Implementing the FDA Food Safety Modernization Act (FSMA), FDA (May 2, 2014), http://www.fda.gov/Food/GuidanceRegulation/FSMA/ucm395105.htm.

39 A study by the USDA Agricultural Marketing Service reported that FPLI coverage requirements for schools varied by district and were between $100,000 and $3 million. See USDA, AMS, USDA Farm to School Team: 2010 Summary Report 45 (2011), available at http://www.fns.usda.gov/sites/default/files/2010_summary-report.pdf. Boys reports FPLI coverage requirements ranging from less than $1 million to $10 million for farms who sell directly to hospitals; most commonly, $1 million to $3 million in FPLI coverage is required. Farmers' markets, wholesalers, and distributors have also reported introducing this as a new requirement of those who sell through them or to them. See Boys, supra note 38, at 2.

45 Even if the scope or extent of potential liability of food industry intermediaries had been constrained through FSMA, it is possible that these firms would still require their suppliers adopt this insurance product.

46 For most policies this insurance offers a two-fold benefit. First, it is the duty of the insurance provider to pay for the insured's legal liability up to the stated policy limits (duty to indemnify). Secondly, it is the duty of the insurer to hire legal counsel to defend the insured against a covered suit, and to cover all associated legal fees and costs (duty to defend). Thus, in the event of a third-party claim against a policyholder, the insurer has a duty to defend against the claim, and a duty to pay any monetary award entered against the insured for covered claims. See Eliot M. Harris, The Duty to Defend: What Insurers, Insureds and Their Counsel Need to Know When Faced With a Liability Coverage Dispute, http://www.americanbar.org/groups/young_lawyers/publications/the_101_201_practice_series/duty.html (last visited Apr. 15, 2015).

52 The extensive variety of activities and products that may be produced on a small farm vary considerably and thus it would be difficult to characterize an “average” farm. For this reason, and due to continued discussions regarding exemption eligibility rules, no comprehensive estimates are available for the FSMA implementation across all rules. See generally FDA, Regulatory Impact Analysis, supra note 35.

53 Id. at 49, 299. It is worth noting that the definition of a small farm also differs between the FDA and the USDA. The USDA defines small farms as those which generate less than $250,000 annual gross cash farm income. See Hoppe & MacDonald, supra note 8, at 1-2. Among these a majority (54%) are deemed non-commercial and generate less than $10,000 in gross cash farm income. The FDA uses the Small Business Administration (SBA) definitions of firm size which defines farms as “small” if their total revenue is less than $750,000. In the SBA nomenclature, “very small farms” are those with less than $250,000 in annual revenue. See id. For consistency with the more commonly used USDA definition of farm size, the reported compliance estimates are for “very small” farms. The average costs of compliance for small farms as defined by the FDA are estimated to be $12,972 or 4% of average annual food sales revenue. See Shermain Hardesty, Food Safety Modernization Act, Small Farm News (Feb. 14, 2013), http://ucanr.edu/blogs/blogcore/postdetail.cfm?postnum=9309.

54 Estimates of the direct costs of FSMA implementation considered within the scope of the FDA regulatory impact analysis have themselves been heavily criticized for errors, omissions, and inadequacy. See, e.g., Comment from Nat'l Organic Coal. on the Proposed Rule for Standards for the Growing,

55 Even for firms excempt from FSMA, the same could be said for FPLI costs they may be required to adopt to sell to certain buyers.

56 For example, in some direct-to-consumer institutional food service marketing channels.