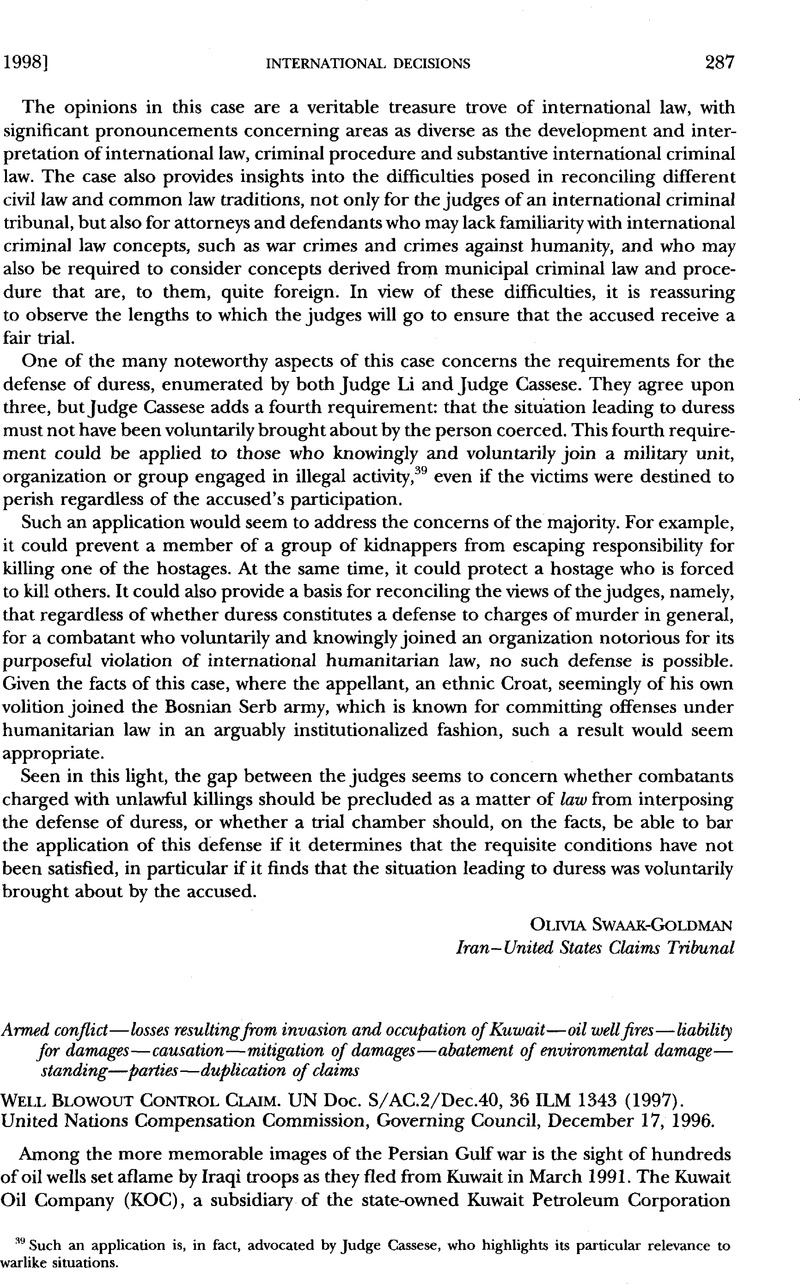 1 KOC claims for lost revenues and the cost of rebuilding the oil wells and resuming production are the subject of related proceedings and were not addressed in this decision.

4 UN Doc. S/AC.26/1991/7/Rev.1, para. 35 (1992) [hereinafter Decision 7]. Governing Council Decision 7 determined that with respect to government claims, payments are available for “losses or expenses resulting from . . . [a]batement and prevention of environmental damage, including expenses directly relating to fighting oil fires”—precisely the type of loss for which KOC was seeking damages. But here the panel faced the issue of KOC’s submission as a corporate claim. The panel concluded, inter alia, that the Governing Council could not have intended to deny subject matter jurisdiction to a claim clearly cognizable under Resolution 687, and that in any event other provisions of Governing Council Decision 7 render KOC’s corporate claim compensable as a loss suffered as a result of “[a]ctions by officials, employees or agents of the Government of Iraq or its controlled entities.” Decision, 36 ILM at 1351–52, paras. 51–54.

9 Decision 7, supra note 4, para. 39 (“Any compensation, whether in funds or in kind, already received from any source will be deducted from the total amount of losses suffered.”).

13 See War-Risk Insurance Premium Claims, 7 R.I.A.A. 44, 62–63 (1923) (“The distinction sought to be made between damages which are direct and those which are indirect is frequently illusory and fanciful and should have no place in international law.”) (citing Alabama Claims, reprinted in 1 John, Bassett Moore, International Arbitrations 646 (1898)).

18 For the passage in question, see text at note 3 supra.

20 Decision, 36 ILM at 1352, para. 54. This conclusion comports with earlier Governing Council decisions that have concluded that “[t]he duty to mitigate damages applies to all claims.” See Decision 15, supra note 19, para. 9.

27 A significant portion of KOC’s claim, approximately $337 million, was deferred for resolution by subsequent panels. Those claims, however, were not rejected on the grounds that they were unreasonable or unverifiable. Rather, verification of those claims was to be made by subsequent panels charged with resolving KOC’s other claims. See, e.g., id. at 1363–64, 1376, paras. 137, 233.