The Power to Declare Neutrality Under American Law 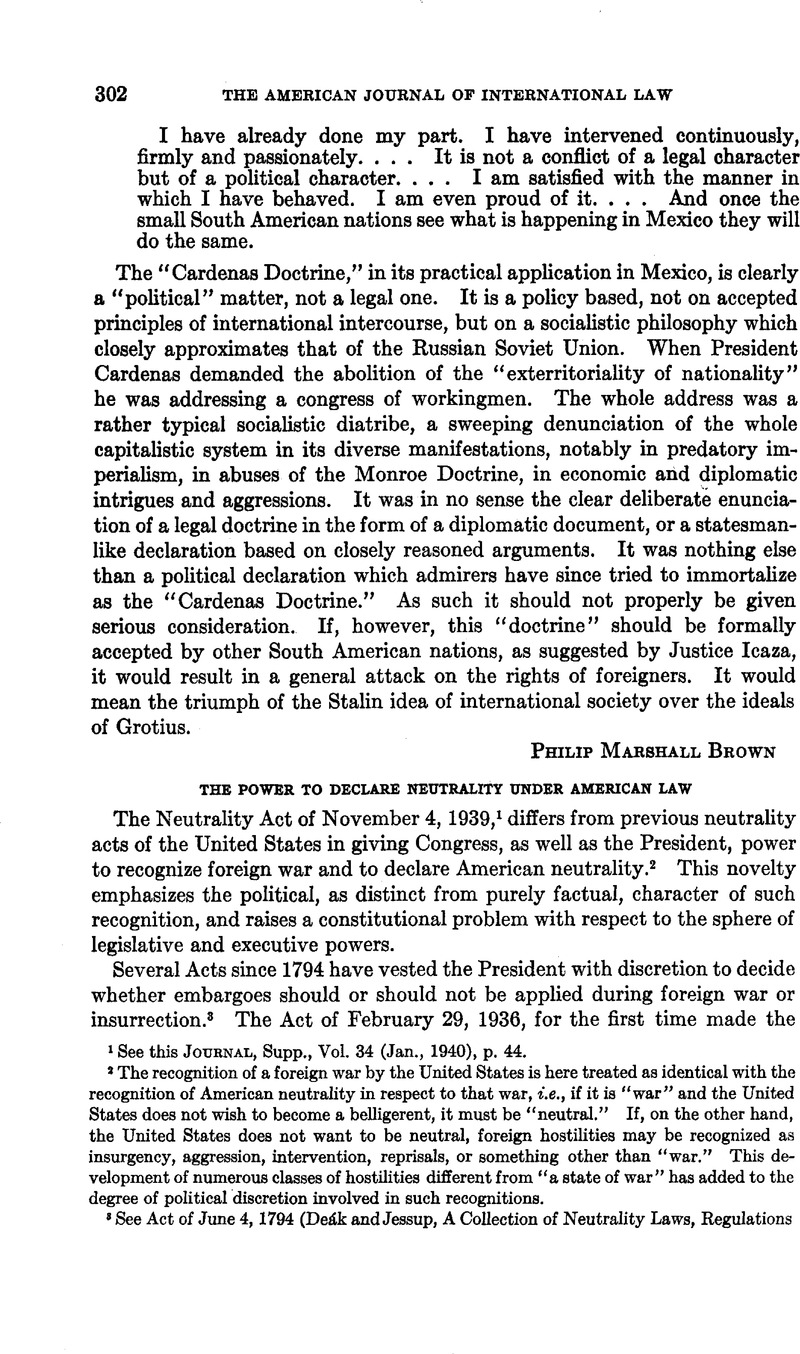 COPYRIGHT: © by the American Society of International Law 1940

2 The recognition of a foreign war by the United States is here treated as identical with the recognition of American neutrality in respect to that war, i.e., if it is “war” and the United States does not wish to become a belligerent, it must be “neutral.” If, on the other hand, the United States does not want to be neutral, foreign hostilities may be recognized as insurgency, aggression, intervention, reprisals, or something other than “war.” This development of numerous classes of hostilities different from “a state of war” has added to the degree of political discretion involved in such recognitions.

8 This might also be supposed from the early assumption that the courts could exercise a common law jurisdiction to punish offenses against neutrality (In re Henfield, Fed. Cas. 6360 (1793); Wright, Q., Enforcement of International Law through Municipal Law (1916), p. 115), and from the explicit grants of jurisdiction to the courts by the Act (Arts. 6, 7).

10 Ibid., Vol. 7, p. 1002; Deák and Jessup, op. cit., Vol. 2, p. 1172. This begins: “Whereas it appears that a state of war exists between … and the duty and interest of the United States require that they should with sincerity and good faith adopt and pursue a conduct friendly and impartial toward the belligerent powers. …”

13 “In every case of a new government and of belligerency, the question of recognition was determined solely by the executive.” In some cases of recognizing new states, especially where recognition might be premature and involve serious political consequences for the United States, the President has “invoked the judgment and cooperation of Congress.” Moore, op. cit., Vol. 1, pp. 243–244. See also, Wright, Q., The Control of American Foreign Relations (New York, 1922), pp. 268, 271.

24 In the Helvidius letters Madison deduced the power of Congress to declare neutrality from its power to declare war because, he argued, a decision with respect to neutrality involved a judgment on the expediency or duty to declare war. (Corwin, op. cit., p. 21.)

29 A report of the Senate Committee on the Judiciary (54th Cong., 2d Sess., Sen. Rep. 335) stated: “The committee found that the passage of concurrent resolutions began immediately upon the organization of the Government, but their use has been not for the purpose of enacting legislation, but to express the sense of Congress upon a given subject—to adjourn longer than three days, to make, amend, or suspend joint rules, and to accomplish similar purposes, in which both houses have a common interest but with which the President has no concern.” (4 Hinds, Precedents, 3483). See also ibid., Vol. 2, pp. 1566, 1567; Willoughby, The Constitutional Law of the United States (1910), Vol. 1, p. 568; Cong. Rec., Nov. 7,1919, Vol. 58, Pt. 8, p. 8075.

37 “Not only, as we have shown, is the federal power over external affairs in origin and essential character different from that over internal affairs, but participation in the exercise of the power is significantly limited. In this vast external realm, with its important, complicated, delicate and manifold problems, the President alone has the power to speak or listen as a representative of the nation. He makes treaties with the advice and consent of the Senate; but he alone negotiates. Into the field of negotiation the Senate cannot intrude; and Congress itself is powerless to invade it.” (United States v. Curtiss-Wright Export Corp., 299 U. S. 304 (1936), this Journal, Vol. 31 (1937), p. 338.) See also, Sutherland, Constitutional Power and World Affairs (New York, 1919). “Resolutions expressing general policies or principles on most subjects connected with foreign relations may be constitutionally passed by Congress, and may furnish useful guides to the President. Congressional expressions of opinion on particular issues, however, and attempts to direct the President thereon encroach upon the executive field and may embarrass the President’s action. In practice foreign policy has developed by executive precedent, practice and declaration.” ( Wright, Q., The Control of American Foreign Relations, p. 282.)

38 “The President is the sole organ of the nation in its external relations and its sole representative with foreign nations.” (John Marshall, in House of Representatives, Annals, 6th Cong., Col. 613.) “The President is the constitutional representative of the United States with regard to foreign nations.” (Report of Senate Committee on Foreign Relations, Feb. 15, 1816, Compilation of Reports, 1901, 56th Cong., 2d Sess., Sen. Doc. 231, Vol. 8, p. 24. See also 54th Cong., 2d Sess., Sen. Doc. 56, p. 21.) “The President is the organ of diplomatic intercourse of the Government of the United States, first, because of his powers in connection with the reception and dispatch of diplomatic agents and with treaty making; secondly, because of the tradition of executive power adherent to his office.” (Corwin, op. cit., p. 33.) Other materials to similar effect are cited in Wright, Q., op. cit., p. 21 ff.

39 “Instead of admitting the Senate or House of Representatives to any share in the act of recognition, I would expressly avoid that form of doing it which would require the concurrence of those bodies. It was, I had no doubt, by our Constitution, an act of the Executive authority.” (John Quincy Adams , Sec. of State, Jan. 1, 1819, Moore, , op. cit., Vol. 1, p. 244.) “In the department of international law, therefore, properly speaking a Congressional recognition of belligerency or independence would be a nullity.” (Report of Senate Committee on Foreign Relations, 1897, Sen. Doc. 56, 54th Cong., 2d Sess., p. 22.)

47 To DeTocqueville’s comment (Democracy in America (New York, 1862), Vol. 1, p. 254) that “it is most especially in the conduct of foreign relations that democratic governments are decidedly inferior to governments carried on upon different principles,” Elihu Root replied, “It is because democracies are not fitted to conduct foreign affairs as they were conducted in DeTocqueville’s day,” and one now has to add in our own day also, “that the prevalence of democracy throughout the world makes inevitable a change in the conduct of foreign affairs,” if, one must add today, democracy is to survive. (Proc. Am. Soc. Int. Law, 1917, p. 9.)

The Power to Declare Neutrality Under American Law