A Pattern of World Order 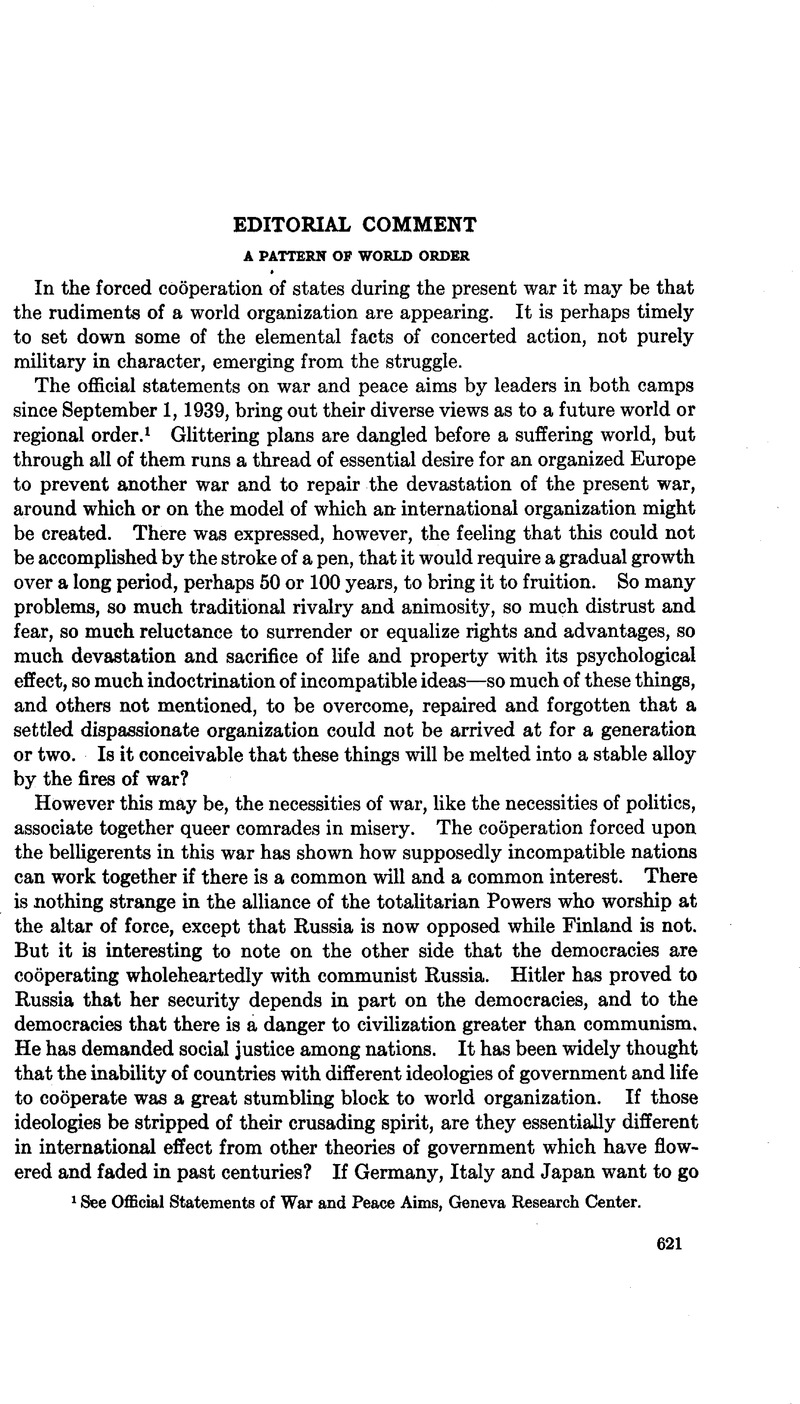 2 As early as Nov. 17,1939, Great Britain and France had set up a coördinating committee limiting the right of free decision in certain domains, including the value of their currencies or the volume of their imports. France regarded the conception of free states, equal in rights and willingly restricting their sovereignty, as the absolute antithesis of Realpolitic.It excluded belief in the myths of the Herrervolk and the Lebensraum.

3 The Polish and Czechoslovak refugee governments made a joint declaration Nov. 11, 1940, on the necessity of establishing after the war a “closer political and economic association” as a basis of a new order in Central Europe.

4 The United Kingdom was represented by Mr. Churchill, Mr. Eden and several other members of the cabinet; the Dominions by their respective High Commissioners; India and Burma by the Secretary of State for India and Burma; the refugee governments in most cases by a Prime Minister and Minister for Foreign Affairs. The Greek representative declared at this meeting that the exchange of populations with Turkey, harsh though it was,had facilitated the establishment of peace and friendship between the two countries.

5 On April 22, 1942, the United States, Argentina, Australia, Canada and the United Kingdom signed a memorandum of agreement regarding international trade in wheat and setting up an international pool of 100,000,000 bushels for relief purposes in stricken areas as soon as possible. Attached is a provisional convention relating to post-war control of production, stocks and export of wheat. New York Times, July 2, 1942.

(1) “No aggrandizement, territorial or other” for themselves.

(2) No territorial changes contrary to the “freely expressed wishes of the peoples concerned.”

(3) “The right of all peoples to choose the form of government under which they will live,” and the restoration of “sovereign rights and self-government” to those “forcibly deprived of them.”

(4) “With due respect for their existing obligations, to further the enjoyment by all States . . . of access on equal terms to the trade and to the raw materials of the world which are needed for their economic prosperity.”

(5) “Fullest collaboration between all nations in the economic field with the object of securing for all improved labor standards, economic advancement and social security.”

(6) “A peace which will afford to all nations the means of dwellingin safety within their own boundaries” and living “in freedom from fear and want.”

(7) “Such a peace should enable all men to traverse the high seas and oceans without hindrance.”

(8) All nations “must come to the abandonment of the use of force ”; “the disarmament of such nations” as threaten aggression “is essential” pending “a wide and permanent system of general security ”; “ all other practicable measures which will lighten for peace-loving peoples the crushing burden of armaments.”

President Roosevelt later added that these “principles include of necessity the world need for freedom of religion and freedom of information.”

7 Some of these omissions have been supplied and carefully discussed by Secretary Hull in his epochal address of July 23, 1942, on post-war conditions and aims, which is too long to summarize. Along with the establishment of an International Court, he advocates “surveillance over aggressor nations until such time as the latter demonstrate their willingness and ability to live at peace with other nations.”

Under Secretary Welles, in his Memorial Day address of last spring, said: “Our victory must bring in its train the liberation of all peoples. Discrimination between peoples because of their race, creed, or color must be abolished. The age of imperialism is ended. The right of a people to their freedom must be recognized. . . .” Dept. of State Bull., May 30,1942, Vol. VI, p. 485.

8 President Roosevelt gave his interpretation of these terms in his message of Jan. 6, 1941. See also Under Secretary Welles, address of Oct. 8, 1942, and The Conditions of Economic Progress, by Colin Clark. Compare with Vice President Wallace’s symbolic suggestion that “the object of this war is to make sure that everybody in the world has the privilege of drinking a quart of milk a day.” There is not freedom from want among our own ill-fed, ill-clothed and ill-housed countrymen. An economic millennium appears to be implied.

9 These include the United States, Russia, China, the British Commonwealth of Nations and India, the eight conquered states of Europe and nine Central American and Caribbean Republics. To these Brazil, Mexico, Ethiopia, and the Philippine Commonwealth have since been added. It is said that these nations represent nearly two-thirds of the population of the globe and more than two-thirds of its economic and military power. New York Times, Jan. 4, 1942.

10 The Norwegian agreement contemplates a further agreement as to the continuance of assistance by the United States, after the invader has been driven out, in order to maintain peaceful conditions in Norway.

11 Russia had already made a Treaty of Alliance, May 26, 1942, with England which in the first part confirmed the military agreement of July 12, 1941 and in the second part defined their relations after the war and provided for their collaboration with other countries along the lines of the Atlantic Charter. They agreed to work together for the “organization of security and economic prosperity in Europe,” not seeking “territorial aggrandizement for themselves” nor “interference in the internal affairs of other states.” Both desired “to unite with other like minded states in adopting proposals for common action to preserve peace and resist aggression in the post-war period,” and “to render impossible a repetition of aggression and violation of the peace by Germany” or her associates in Europe. If either party be again attacked, the other party will give “all the military and other support and assistance in its power.” Molotoff’s Report to Supreme Soviet, June 18, 1942, NewYork Times, June 20, 1942. For text of the treaty, see this Journal, Supp., p. 216.

13 Under Secretary Sumner Welles, address of May 30, supra. The United States has signed limited lease-lend agreements with 16 American Republics who have declaredwar on or broken relations with the Axis Powers.

A Pattern of World Order