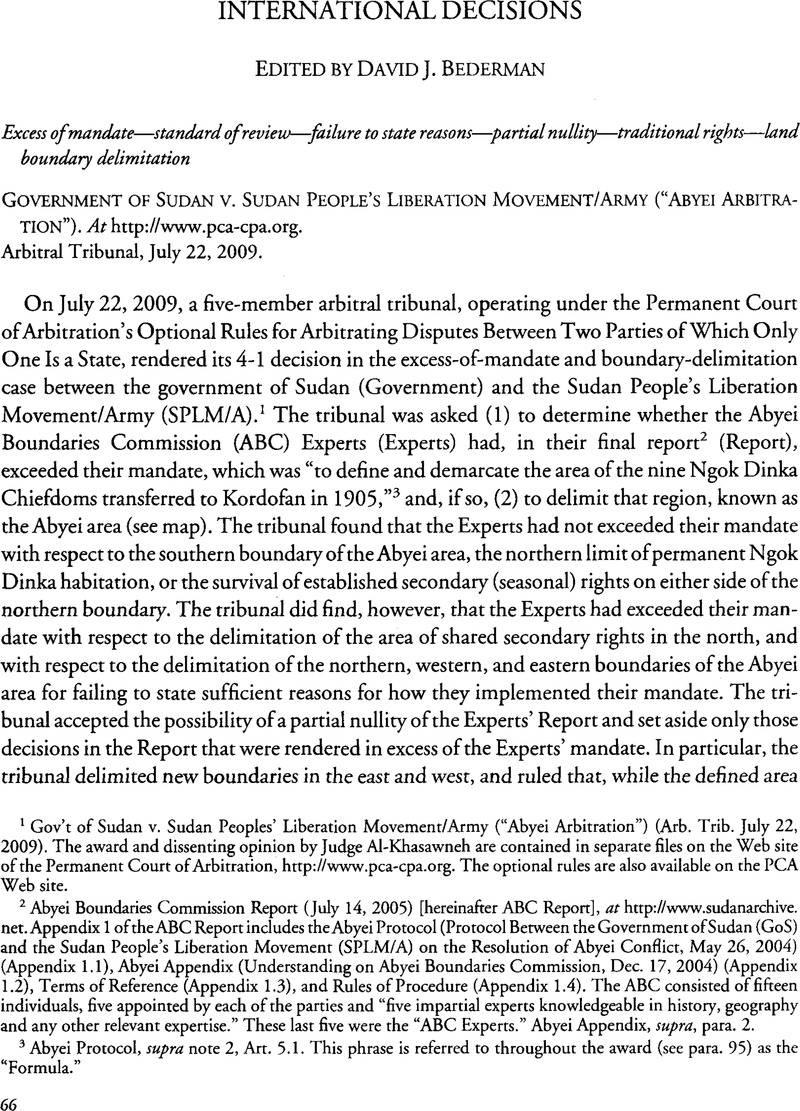 1 Gov’t of Sudan v. Sudan Peoples’ Liberation Movement/Army (“Abyei Arbitration”) (Arb. Trib. July 22, 2009). The award and dissenting opinion by Judge Al–Khasawneh are contained in separate files on the Web site of the Permanent Court of Arbitration, http://www.pca–cpa.org. The optional rules are also available on the PCA Web site.

2 Abyei Boundaries Commission Report (July 14, 2005) [hereinafter ABC Report], at http://www.sudanarchive.net. Appendix 1 of the ABC Report includes the Abyei Protocol (Protocol Between the Government of Sudan (GoS) and the Sudan People’s Liberation Movement (SPLM/A) on the Resolution of Abyei Conflict, May 26, 2004) (Appendix 1.1), Abyei Appendix (Understanding on Abyei Boundaries Commission, Dec. 17, 2004) (Appendix 1.2), Terms of Reference (Appendix 1.3), and Rules of Procedure (Appendix 1.4). The ABC consisted of fifteen individuals, five appointed by each of the parties and “five impartial experts knowledgeable in history, geography and any other relevant expertise.” These last five were the “ABC Experts.” Abyei Appendix, supra, para. 2.

4 The Experts found that “no map exists showing the area inhabited by the Ngok Dinka in 1905. Nor is there sufficient documentation produced in that year by the Anglo–Egyptian Condominium government authorities that adequately spell out the administrative situation that existed in that area at that time.” ABC Report, supra note 2, at 4. The tribunal further described the uncertainty of the Bahr el Ghazal–Kordofan boundary at paragraphs 618 to 623.

6 In particular, violent clashes in May 2008 destroyed Abyei Town. This incident is most likely the one that Judge Al–Khasawneh refers to in his critique (dissent, para. 193) of the Experts’ decision: “By proceeding as they did, they in fact derailed that peace process and caused a conflict in which Abyei itself was destroyed.”

10 The Road Map for Return of IDPs and Implementation of Abyei Protocol, Khartoum, June 8, 2008, para. 4.1, at http://unmis.unmissions.org/Portals/UNMIS/2008Docs/Abyei%20Roadmap.pdf.

12 “The Tribunal acknowledges that a ‘territorial interpretation’ of the Formula, pursuant to which more significance would have been conferred to the provincial boundary (albeit approximate and uncertain), could also have been reasonably justified” (para. 671).

13 “The area to be defined is described in the protocol as the area of the 9 Ngok Dinka chiefdoms—no one else. And we are supposed to discover what territory was being used and claimed by those 9 chiefdoms when the administrative decision was made to place them in Kordofan” (para. 565, quoting the ABC Report, supra note 2, pt. 2 at 155–56).

14 Additionally: “It appears that the Parties did not expect or authorize the Tribunal to make any definitive substantive determination . . . as to the ABC Experts’ correctness of fact or law with respect to its delimitation of the Abyei Area in 1905” (para. 398).

15 These conclusions were “not supported by sufficient reasons” (para. 697).

16 Here, too, the Experts’ reasoning was insufficient, and in the case of the western boundary, the Experts failed “to state any reasons at all” (para. 708).

17 The parties had argued their delimitation positions in the course of the proceedings. The Government argued that the Abyei area was “the area bounded on the north by the Bahr el–Arab and otherwise by the boundaries of Kordofan as at independence” (para. 37, quoting Government memorial), The SPLM/A argued that, if the tribunal found an excess of mandate, the Abyei area was defined by “the current boundary of Kordofan and Bahr el Ghazal to the south extending to 10°35’ N latitude to the north and the current boundary of Kordofan and Darfur to the west extending to [29°]32’15” E longitude to the east” (para. 39, quoting SPLM/A memorial, as modified).

18 In the ABC Report the northern limit of the area of permanent habitation of the Ngok Dinka at 10°10’ N formed the southern limit of the shared rights area. It appears that the 10° 10’ N line became, in the award, the new northern limit through the process of invalidating the more northerly alternatives under the Article 2(a) review rather than through a de novo review of the evidence under Article 2(c). “By invalidating the 10°35’ N and 10°22’30” N lines while upholding the 10°10’ N line, the Tribunal has fulfilled its mandate with respect to the northern limit of the Abyei Area...” (para. 711). The dissent (para. 34; see paras. 38 –39) questioned “whether that line is in fact a mere confirmation of the Experts’ line or in essence a new line.”

19 Although much of the post–award reporting focuses on the location of oil fields relative to the ABC Report’s boundaries and the award boundaries—the new eastern boundary excludes the major fields from the Abyei area— there is no discussion of oil resources in the tribunal’s analysis; its decision was based on other grounds.

20 Point 5 of the ABC Report read: “The Ngok and Misseriya shall retain their established secondary rights to the use of land north and south of this boundary.”

21 For example, with respect to the key phrase in Article 2, the tribunal noted “the paucity of authority on what ‘excess of mandate’ concretely represents in law “ (para. 401).

22 Article 3 of the Arbitration Agreement, supra note 11, called on the tribunal “to resolve the disputes before it in accordance with the provisions of the [Comprehensive Peace Agreement], particularly the Abyei Protocol and the Abyei Appendix, the Interim National Constitution of the Republic of Sudan, 2005, and general principles of law and practices as the Tribunal may determine to be relevant” (para. 425, emphasis added (quoting Arbitration Agreement)).

23 The tribunal’s role under Article 2(c) as a boundary delimitation tribunal was less difficult to discern.

25 The tribunal noted that “neither Party has asked the Tribunal to assume a review function akin to a ‘court of appeals,’ a clear demonstration of their continued wish to circumscribe this Tribunal’s jurisdiction” (para. 411).

26 In the latest ICSID matter concerning annulment—Azurix Corp. v. Argentina, Decision on Annulment, ICSID Case No. ARB/01/12 (Sept. 1, 2009), in which one of the possible grounds for annulment was failure to state reasons— the committee members did not cite the current award, but this lack of reference may reflect the fact that the award was published only five weeks before the ICSID decision.

27 Abyei Chief Administrator Pledges to Support Border Technical Demarcation Team (Sept. 11, 2009), at http://www.sudantribune.com. Unfortunately, as of December 2009, actual demarcation of the Abyei area has proceeded slowly, having been hindered by the presence of armed groups opposed to the demarcation. Of the anticipated twenty–eight boundary markers, only four had been placed as of early December. [Sudan’s First Vice President] Accuses [National Congress Party] of Hindering Abyei Boundary Demarcation (Dec. 3, 2009), at http://unmis.unmissions.org/Portals/UNMIS/MMR/MMR%203%20Dec%2009.pdf.