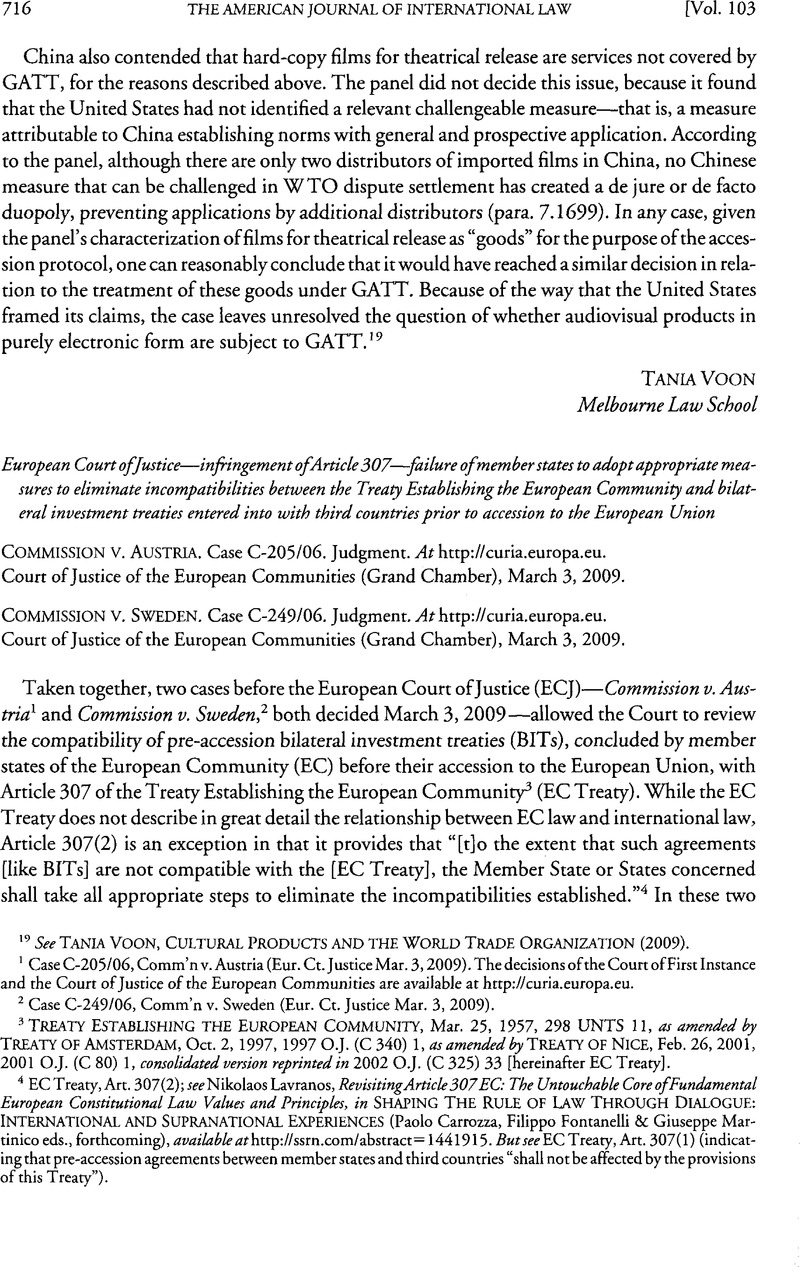 COPYRIGHT: © 2009 by The American Society of International Law

1 Case C–205/06, Comm’n v. Austria (Eur. Ct. Justice Mar. 3, 2009). The decisions of the Court of First Instance and the Court of Justice of the European Communities are available at http://curia.europa.eu.

6 Article 56 of the EC Treaty provides:

Whilst endeavouring to achieve the objective of free movement of capital between Member States and third countries to the greatest extent possible and without prejudice to the other Chapters of this Treaty, the [European] Council may, acting by a qualified majority on a proposal from the [European] Commission, adopt measures on the movement of capital to or from third countries involving direct investment—including investment in real estate—establishment, the provision of financial services or the admission of securities to capital markets. Unanimity shall be required for measures under this paragraph which constitute a step back in Community law as regards the liberalisation of the movement of capital to or from third countries.

Where, in exceptional circumstances, movements of capital to or from third countries cause, or threaten to cause, serious difficulties for the operation of economic and monetary union, the Council, acting by a qualified majority on a proposal from the Commission and after consulting the [European Central Bank], may take safeguard measures with regard to third countries for a period not exceeding six months if such measures are strictly necessary.

9 Article 60(1) provides: “If, in the cases envisaged in Article 301, action by the Community is deemed necessary, the Council may, in accordance with the procedure provided for in Article 301, take the necessary urgent measures on the movement of capital and on payments as regards the third countries concerned.” Article 301, as referred to in that provision, states:

Where it is provided, in a common position or in a joint action adopted according to the provisions of the Treaty on European Union relating to the common foreign and security policy, for an action by the Community to interrupt or to reduce, in part or completely, economic relations with one or more third countries, the Council shall take the necessary urgent measures. The Council shall act by a qualified majority on a proposal from the Commission.

If the Commission considers that a Member State has failed to fulfil an obligation under this Treaty, it shall deliver a reasoned opinion on the matter after giving the State concerned the opportunity to submit its observations.

If the State concerned does not comply with the opinion within the period laid down by the Commission, the latter may bring the matter before the Court of Justice.

The Commission has also targeted other EC member states. See Press Release, Free Movement of Capital: Infringement Procedures Against Denmark, Austria, Finland and Sweden Concerning Bilateral Investment Treaties with non–EU Countries (May 10, 2004), available at http://europa.eu/rapid/pressReleasesAction.do?reference=IP/04/618&format=HTML&aged=l&language=EN&guiLanguage=en. The Commission also brought an action against Finland in Commission v. Finland, 2007 O.J. (C 95) 30 (Feb. 27, 2007), resulting in the opinion of Advocate General Sharpston two years later. Opinion of the Advocate General Sharpston (Sept. 10, 2009), Case C–l 18/07, Comm’n v. Finland (Eur. Ct. Justice). The BITs between Finland and the third states contained the following caveat: “Every contracting party guarantees under all circumstances, within the limits authorised by its own laws and decrees and in conformity with international law, a reasonable and appropriate treatment of investments made by the citizens or companies of the other contracting party.” Id., para. 5 (emphasis added). Accordingly, Finland argued that any restrictive EC law measures would fall within this caveat and thus should enable Finland to fulfill its obligations under Article 307. Id., para. 6. However, the advocate general was not convinced and instead explicitly followed the ECJ’s rulings of both cases discussed herein. Id., paras. 4 6 – 4 7 . Originally, the Commission had also targeted Denmark in particular because of its BIT with Indonesia, which supposedly violated Article 307. Meanwhile, Denmark terminated that treaty and negotiated a new one that was signed on January 22, 2007.

17 Article 292 provides: “Member States undertake not to submit a dispute concerning the interpretation or application of this Treaty to any method of settlement other than those provided for therein.”