A Case of International Responsibility During Martial Rule 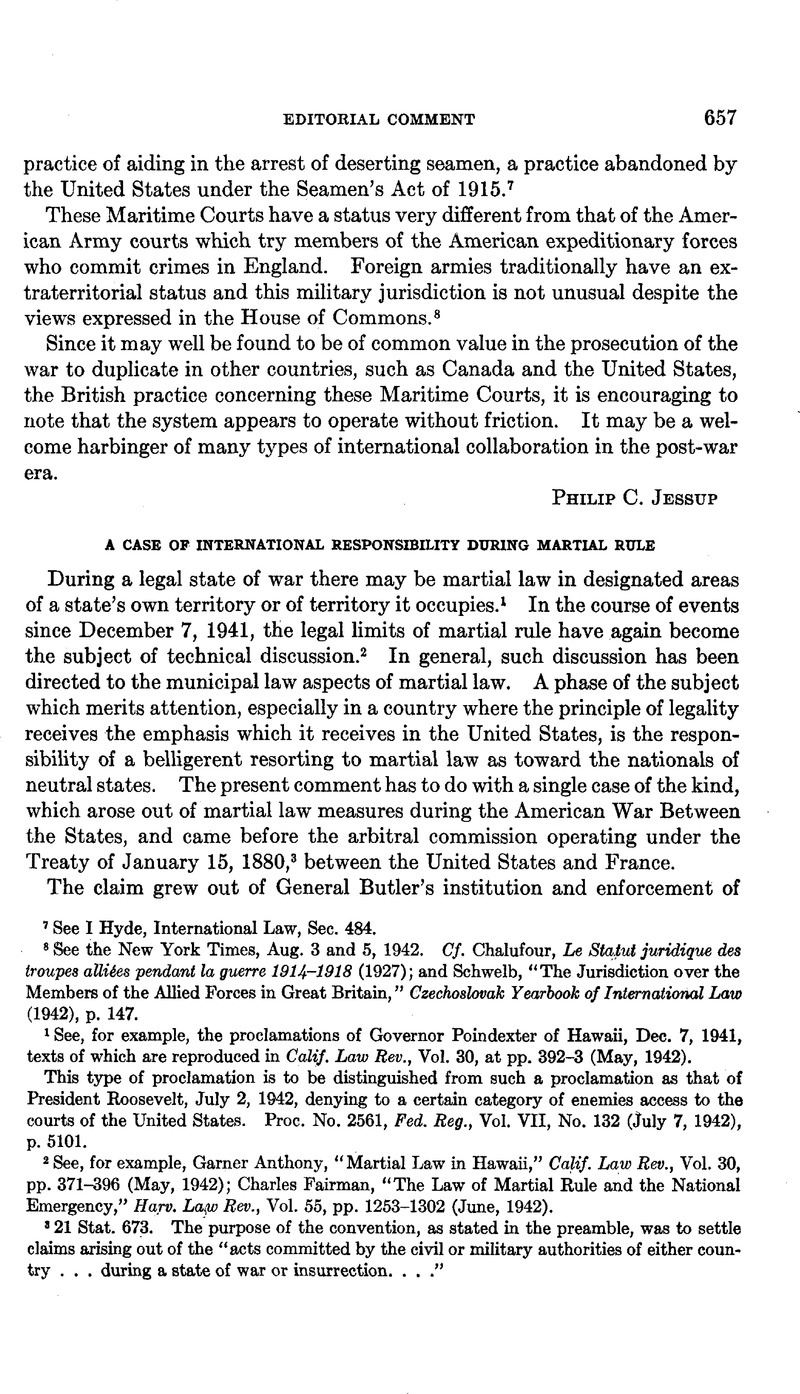 3 21 Stat. 673. The purpose of the convention, as stated in the preamble, was to settle claims arising out of the “acts committed by the civil or military authorities of either country . . . during a state of war or insurrection. . . .”

6 It was submitted that the General’s “pretended” martial law was illegal “bluster.”

The commander’s action was apparently approved later by the President and by Congress. For an account of the history of the period, and of some international aspects, see James Parton, General Butler in New Orleans (1864), especially Ch. XX.

7 The opposing view was that this simply meant that nationals of neutral states would be protected, as theretofore, not that they would be exempt from martial law restrictions.

8 It may be argued that there was a “trial” of Dubos before the General himself. It was at Butler’s own order that the French writer was sent to the custom-house and later to Ship Island.

11 There were awards in 34 cases. The Commission disallowed 64 claims. Of the remaining two, the Commission dismissed one without prejudice because of improper language in the memorial, and the British Agent withdrew one by leave of the Commission. Hale’s Report (For. Rel., 1873, Vol. III), pp. 61–87.

13 The United States in the late nineteenth century took the position that its treaty of Jan. 12, 1877, with Spain, prevented martial law or a state of siege (when it was proclaimed in Cuba by the Spaniards) from affecting rights of American citizens. It was contended that there could rightfully be no incommunicado imprisonment beyond 74 hours, the maximum permit ed under Article IV of the Spanish Constitution of 1876. J. B. Moore, Digest, II, 197. The General Claims Commission, United States and Mexico, said, in the case of Joseph A. Farrell decided in 1930, that the tribunal was “not prepared to state that a law which permits the incomunicación of an accused in a manner implying neither cruelty nor interference with the right of defense, is in violation of international law.” Ops. of Commissioners, Docket No. 282.

15 On the jurisdiction over persons of the nationality of neutral states who, in territory under military occupation, commit offenses against members of the occupant army, see the note, “De la juridiction des armies d’occupation en matière de dèlits commis par des etrangers contre les mililaires,” Clunet, 1882, 511–520. See also the Volkmar claim before the United States-Venezuelan Commission, in which the tribunal applied the principle that a foreigner domiciled in the territory of a belligerent cannot expect exemption from the operations of a hostile force. Ralston’s Report, pp. 258–9.

A Case of International Responsibility During Martial Rule