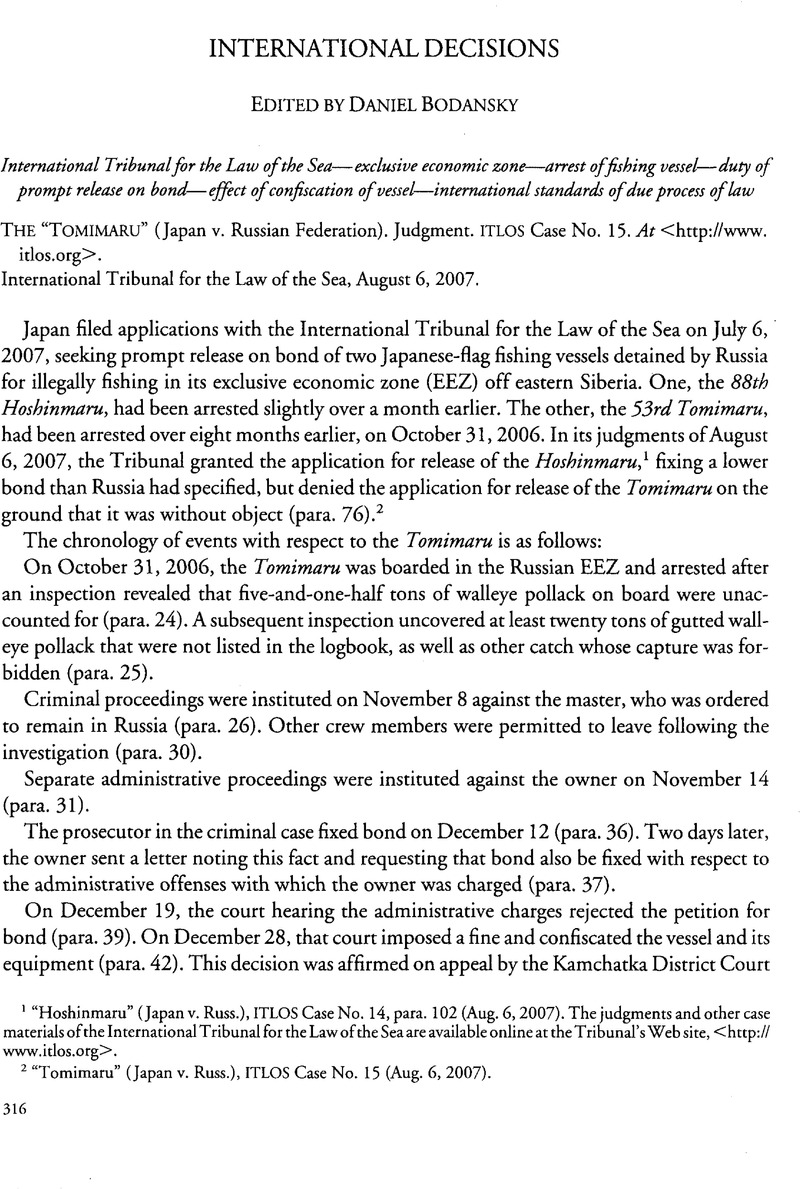 3 The Tribunal considered it appropriate to take this fact into consideration (para. 68). It noted that, after being informed of the Supreme Court’s decision, Japan did not maintain its argument that the confiscation of the Tomimaru was not final (para. 79).

4 As is apparent, for example, from the declaration of Judge Yanai (para. 2), this finding was fairly deferential to the respondent given the complexity of, and alleged lack of clarity in, its domestic procedures.

8 “Grand Prince” (Belize v. Fr.), ITLOS Case No. 8 (Apr. 20, 2001). The Tribunal never reached the confiscation issue because it found proprio motu that it lacked jurisdiction on the grounds that the applicant, quite independently of any effect of the confiscation, had failed to establish that it was the flag state at the time the application for prompt release was made. Id., paras. 61, 77, 93. The present author has had occasion to comment twice on the question of confiscation and prompt release raised by France in the “Grand Prince” cist, once briefly in Bernard, H. Oxman & Vincent, P. Bantz, Case Report: The “Grand Prince” (Belize v. France) , 96 AJIL 219 (2002)Google Scholar, and once at greater length in Bernard, H. Oxman & Vincent, P. Bantz, Un droit de confisquer? L’obligation de prompte mainlevée des navires , in La mer et son droit: MÉlanges offerts À Laurent Lucchiniet Jean–Pierre QuÉneudec 479 (2003)Google Scholar. Readers may be amused to learn that the editors of the Mélanges prompted the division of the title of the essay into two sentences and the movement of the question mark from its original position at the end of the title.

9 “Juno Trader” (St. Vincent v. Guinea–Bissau), ITLOS Case No. 13 (Dec. 18, 2004). The Tribunal never reached the confiscation issue because it found that the Regional Court of Bissau, in suspending application of the fine imposed on the vessel, removed the legal basis for the subsequent confiscation for nonpayment of the fine. Id., paras. 52, 53, 62.

10 It expressly stated in oral argument (see Verbatim Transcript of July 21, 2007 (a.m.), at 17, 11. 6–8): “Japan considers the position to be clear and simple. The Tomimaru is liable to confiscation under Russian law. It is held by Russia, detained by Russia, and a final determination of the question of confiscation is pending before the Russian courts.”

11 In his separate opinion in the “Grand Prince” case, at 2 n.3 (emphasis added), Judge Anderson noted:

The FAO’s publication entitled “Coastal State Requirements for Foreign Fishing” (FAO Legislative Study 21, Rev. 4) states (section 5) that: “In addition to fines, the vast majority of countries empower their courts to order forfeiture of catch, fishing gear and boats. In a few cases, forfeiture of vessels is automatic, even on the first offence.” The accompanying Table E, headed “Penalties for unauthorized foreign fishing”, lists over 100 jurisdictions, most of them States Parties to the Convention, which provide for forfeiture of the vessel used in unauthorized fishing activities.

That list of over one hundred jurisdictions includes Japan and Russia.

14 Article 292 also applies to a similar obligation of prompt release where vessels and crew are arrested for pollution violations. See LOS Convention, supra note 5, Arts. 220(7), 226(1) (b). The question of confiscation may not often arise in that context; only monetary penalties may be imposed for pollution violations beyond the territorial sea (and even within the territorial sea absent “a wilful and serious act of pollution”). Id., Art. 230.

16 This limitation is especially important because the Tribunal may not otherwise have jurisdiction to adjudicate the question of the lawfulness of the confiscation. The LOS Convention generally excludes coastal state regulation of fishing in the EEZ from compulsory arbitration or adjudication. This exclusion arises from the general limitation on adjudicatory competence over disputes with regard to the exercise by a coastal state of its sovereign rights or jurisdiction in paragraph 1 of Article 297, and is specifically articulated with respect to fisheries in the EEZ in paragraph 3(a) of that article. Parties to the Convention have the right to opt for further limitations on jurisdiction over law enforcement activities with respect to fisheries in the EEZ. Id., Art. 298, para. 1(b). Moreover, Article 292 is a narrow exception to the general right of the parties to the Convention to select the forum before which a question of interpretation or application of the Convention may be raised, with arbitration under its Annex VII as the residual procedure absent agreement or declarations by both parties providing otherwise. Id., Arts. 280, 282, 287(5).

17 In this regard, it should be noted that confiscation of a vessel would not render the obligation to release the master or crew without object. That was not at issue in this case because the master and crew had already been released.

18 With respect to diplomatic protection, the International Law Commission’s draft articles provide that nationality must be continuous “from the date of injury to the date of the official presentation of the claim” and that, moreover, a “State is no longer entitled to exercise diplomatic protection in respect of a person who acquires the nationality of the State against which the claim is brought after the date of the official presentation of the claim.” Report of the International Law Commission on its Fifty–eighth Session, UN GAOR, 61st Sess., Supp. No. 10, UN Doc. A/61/10 (2006)6), available at <http://untreaty.un.org/ilc/reports/2006/2006report.htm>; see Loewen Group, Inc. v. United States, Award, ICSID Case No. ARB(AF)/98/3 (nafta Ch. 11 Arb. Trib. June 26, 2003) (discussed in case report by William, S. Dodge at 98 AJIL 155 (2004)Google Scholar).

19 The distinction between change of title and change of flag was previously noted by Judges Mensah and Wolfrum in “Juno Trader” sep. op. Mensah & Wolfrum, JJ., para. 9.

20 In his separate opinion Judge Lucky, apparently disagreeing with the majority, asserted (p. 10) that

this statement is not necessary in view of the decision in this case. In a case such as the instant case, where the merits of the case against the owner of the vessel were dealt with by courts of competent jurisdiction under the applicable laws of the Russian Federation, confiscation is a.fait accompli. Therefore the Application lost its force even before the Supreme Court of the Russian Federation delivered its judgment.

The Judgment in paragraph 76 seems to suggest that this Tribunal has the power to examine whether the shipowner was prevented from having recourse to available domestic judicial procedures, to find out whether the proceedings were inconsistent with due process of law and so on. . . .

. . . Perhaps these are not matters to be dealt with within the system contained in article 292.

23 In the “Camouco” case, para. 67, the Tribunal offered the following guidance:

The Tribunal considers that a number of factors are relevant in an assessment of the reasonableness of bonds or other financial security. They include the gravity of the alleged offences, the penalties imposed or imposable under the laws of the detaining State, the value of the detained vessel and of the cargo seized, the amount of the bond imposed by the detaining State and its form.

24 “Juno Trader,” para. 77. In his separate opinion in that case (paras. 3, 5), Judge Treves elaborated on the importance of respect for human rights in this context.