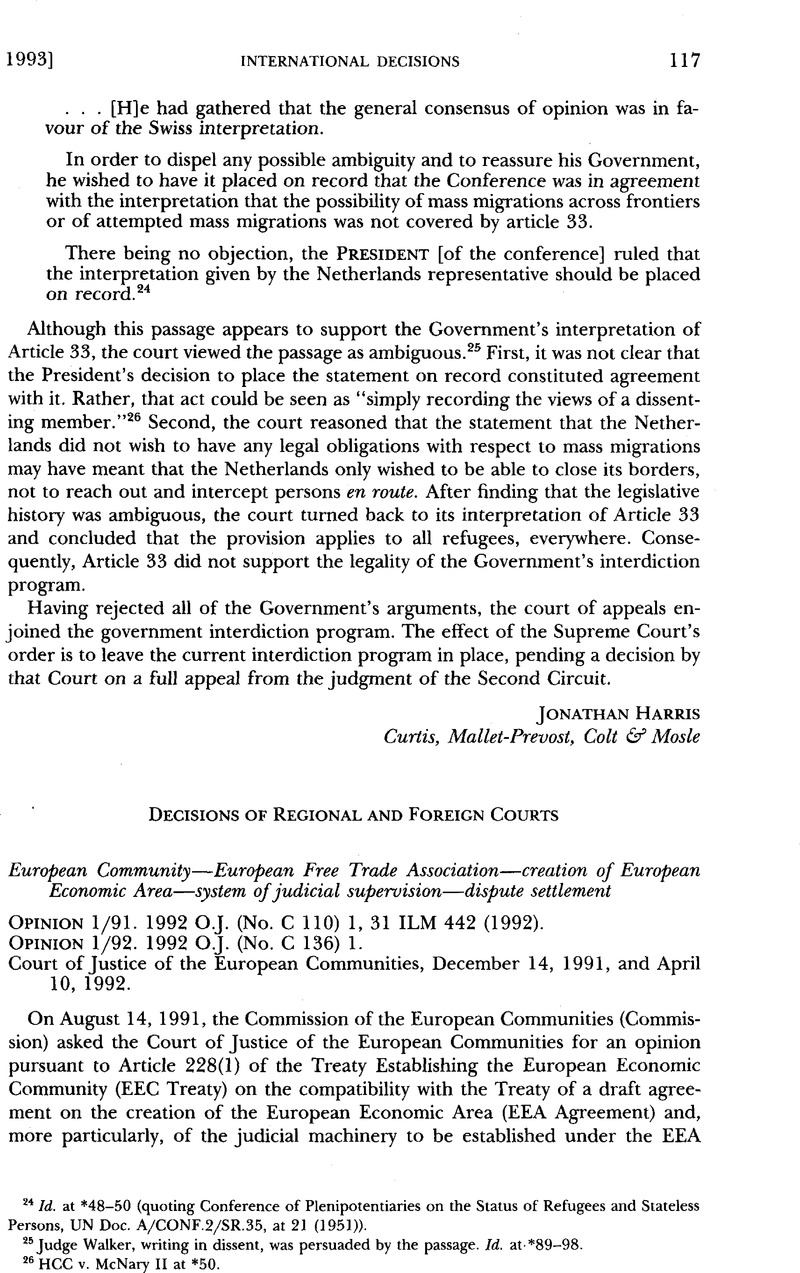 An abstract is not available for this content so a preview has been provided. Please use the Get access link above for information on how to access this content.
Type
Decisions of Regional and Foreign Courts
Information
American Journal of International Law , Volume 87 , Issue 1 , January 1993 , pp. 117 - 128
DOI: https://doi.org/10.2307/2203857[Opens in a new window]
Copyright
Copyright © American Society of International Law 1993

It is the purpose of the second subparagraph of Article 228(1) to forestall complications which would result from legal disputes concerning the compatibility with the Treaty of international agreements binding upon the Community. In fact, a possible decision of the Court to the effect that such an agreement is, either by reason of its content or of the procedure adopted for its conclusion, incompatible with the provisions of the Treaty could not fail to provoke, not only in a Community context but also in that of international relations, serious difficulties and might give rise to adverse consequences for all interested parties, including third countries.

7 Spain may have been a likely candidate, as its submissions to the Court in the proceeding leading up to Opinion 1/91 were critical of certain provisions of the EEA Agreement. See Opinion 1/91 at 7–9, 31 ILM at 452–57.

Article 103 of the European Atomic Energy Community (EAEC) Treaty establishes a slightly different procedure for obtaining “rulings” from the Court. The member states must send drafts of the instruments to the Commission before entering into international agreements if they concern matters covered by the EAEC Treaty. If the Commission objects to the agreement, the member state may ask the Court to rule on the consistency of the draft agreement with the Treaty. To date, this procedure has only been used once. Ruling 1/78, 1978 ECR 2151 (competence to conclude an agreement on protection of nuclear materials). In contrast to the EEC and EAEC Treaties, the European Coal and Steel Community (ECSC) Treaty does not provide for a notification procedure regarding international agreements. Regrettably, the Maastricht Treaty did not iron out the inconsistencies among the three treaties.

While the Court has largely limited the scope of its inquiry, it has been careful to emphasize that its powers under Article 228(1) extend beyond matters involving the division of powers in external relations to include scrutiny of the substantive provisions of the agreement as well. For instance, in Opinion 1/75, 1975 ECR at 1360–61, the Court noted that “[t]he compatibility of an agreement with the provisions of the Treaty must be assessed in the light of all the rules of the Treaty, that is to say, both those rules which determine the extent of the powers of the institutions of the Community and the substantive rules.” See also Opinion 1/78, 1978 ECR at 2907 (“a judgment on the compatibility of an agreement with the Treaty may depend not only on provisions of substantive law but also on those concerning the powers, procedure or organization of the institutions of the Community”). See generally Mixed Agreements (David O’Keeffe & Henry G. Schermers eds., 1983).

10 “This Opinion does not consider the other provisions of the agreement, in particular those dealing with the decision-making process and the allocation of responsibilities in the field of competition.” Opinion 1/91 at 9, para. 1,31 ILM at 457. The provisions of the Agreement dealt with by the Court are quoted in id. at 2–5, 31 ILM at 445–50.

11 In support of this principle, the Court cited Article 31 of the Vienna Convention on the Law of Treaties, opened for signature May 23, 1969, 1155 UNTS 331, which stipulates that a treaty is to be interpreted in good faith in accordance with the ordinary meaning to be given to its terms in their context and in light of its object and purpose.

16 Article 219 provides: “Member States undertake not to submit a dispute concerning the interpretation or application of this Treaty to any method of settlement other than those provided for therein.”

20 For a summary of these submissions, see Opinion 1/91 at 6–7, 31 ILM at 452–54. The Court also ignored the point made by the United Kingdom: The EEA Court was to be composed of 5 of the 13 judges on the Court of Justice. Since a full court could be convened with 7 judges, it would be possible to convene a full court none of whose members had participated in a previous decision of the EEA Court.

The Community may conclude with a third State, a union of States or an international organization agreements establishing an association involving reciprocal rights and obligations, common action and special procedures.

Where such agreements call for amendments to this Treaty, these amendments shall first be adopted in accordance with the procedure laid down in Article 236.

26 Article 108(2) of the EEA Agreement specifies that the EFTA Court will have jurisdiction over the following matters: (1) claims concerning the surveillance procedure with respect to EFTA states; (2) appeals against decisions made by the EFTA Surveillance Authority in the competition field; and (3) the settlement of disputes between two or more EFTA states. Id.

27 During the negotiations, the Commission proposed that the contracting parties agree to be bound by the future case law of the Court of Justice. See Message relatif à I’approbation de I’accord sur I’Espace économique européen sec. 8.43 (May 18, 1992) (official Swiss commentary on the EEA Agreement).

32 EEA Agreement, supra note 25, Art. 111(1), (2). Article 111(2) provides that the Joint Committee “shall be provided with all information which might be of use in making possible an indepth examination of the situation, with a view to finding an acceptable solution. To this end, the EEA Joint Committee shall examine all possibilities to maintain the good functioning of the Agreement.”

33 Id., para. 3. In its submission to the Court in the context of Opinion 1/92, the Commission stated: “although this is not set down in the Agreement, it has been agreed that the Commission will bring the matter before the Court and request an Opinion under Article 228 of the EEC Treaty.” Opinion 1/92 at 6. In its submissions, the European Parliament expressed reservations about the fact that the procedure for referring a request for the settlement of a dispute to the Court of Justice does not appear in the EEA Agreement itself. Id. at 8.

36 Id. In its submission to the Court of Justice in connection with Opinion 1/92, the Commission noted that “[t]he arbitrators must confine themselves to the facts and may not arbitrate on points of law.” Opinion 1/92 at 6.

38 For example, Article 105(2) specifies that the Joint Committee “shall act so as to preserve the homogeneous interpretation of the Agreement.” Does this mean that the Joint Committee is supposed to sift through court judgments every month to see if there are inconsistencies? Is it supposed to wait for a party to the EEA Agreement to bring a difference to its attention? What does “act” mean? Adopt a decision? On whom is this decision binding? If a party manages to make its way through the procedure in Article 105 so as to arrive at the dispute settlement procedure in Article 111, matters seem to become worse. For example, it is unclear to what extent the time periods specified in Article 111 apply to cases that began with the Article 105 procedure. These problems did not go unnoticed by the European Parliament, which, in its observations before the Court, noted that “the procedures are so complicated and the demarcation lines so vaguely drawn that the renegotiated texts should be revised, simply from the point of view of legal certainty and the difficulties in determining the law applicable to a given situation.” Opinion 1/92 at 8.

40 In its submission to the Court, the European Parliament criticized the Commission for only referring a limited aspect of the institutional machinery set up by the EEA Agreement to the Court. In the Parliament’s view, “the Court should have been asked to consider the institutional machinery as a whole and, more specifically, the Parliament’s role in the decision-making procedure.” Opinion 1/92 at 8.

44 The Court noted that the binding nature of the Court’s interpretation “is clear from the very working of the two language versions of the Agreement submitted to the Court, which use the French expression ‘se prononcer’ and the English ‘give a ruling.’ ” Id., para. 34.

45 Opinion 1/92 offers some hint as to the outcome of a case pending before the Court in which France challenged the authority of the Commission to conclude an agreement with the United States concerning the application of competition law. For the notice of appeal, see 1992 OJ. (No. C 28) 4.