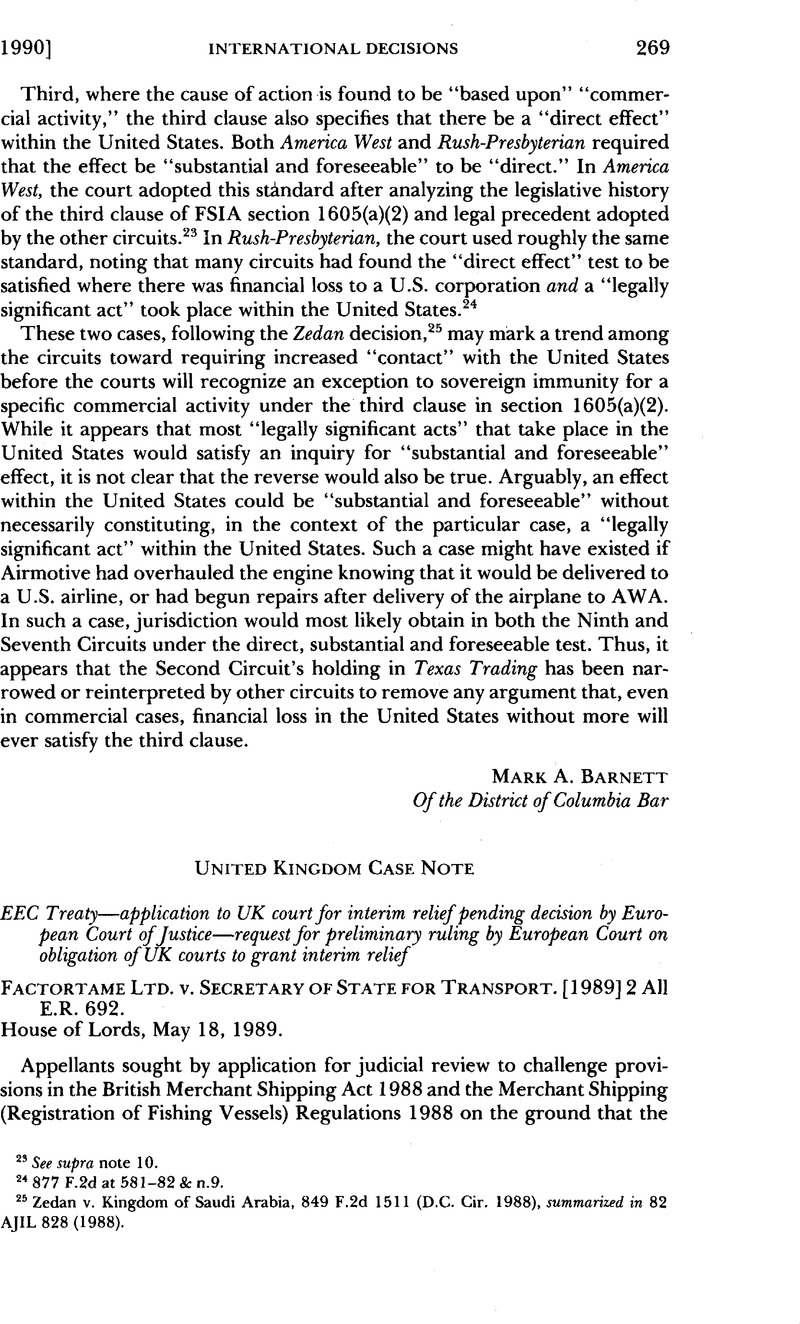 2 Neither side appealed from the reference to the ECJ of the consistency of this UK legislation with overriding EEC law.

4 Lord Bridge devoted considerable attention to the case of Hoffmann-La Roche v. Secretary of State for Trade & Industry, 1975 App. Cas. 295. Although the House of Lords in Hoffmann-La Roche had determined that the lower court had properly granted an injunction enforcing a statutory order before a challenge to the validity of the order was decided, the opinions of several Law Lords had stressed that courts need not in all circumstances grant interim enforcement orders while the validity of the underlying legislation is in dispute. Lord Bridge accepted this proposition but found it inapplicable to the situation in Factortame.

13 The judges in the lower courts also reaffirmed this principle. Neill, L.J., stated in the divisional ruling that “the High Court now has a duty to take account of and give effect to EEC law and where there is a conflict to prefer the Community to national law.” [1989] 2 Common Mkt. L.R. 353, 373.

In the Court of Appeal, Bingham, L.J., explained that if the answer given by the ECJ on the first preliminary ruling is favorable to the appellants, the divisional court will be obliged to uphold the Community rights “even though the 1988 Act had not been repealed and even though its decision involves dispensing with (or disapplying) express provisions of the statute.” Id. at 396.

Lord Donaldson, M.R., expressed annoyance at the difficult position he often found himself in and said that “it would render a service to the nation if Parliament moved slightly more in the direction of Community law.” Id.

14 1986 Q.B. 716, [1985] 3 All E.R. 585 (denying French turkey producers the right to claim damages for losses allegedly suffered as a result of the Minister of Agriculture’s refusal to grant an import licence in time to permit shipment of turkeys to the United Kingdom for the Christmas market). According to press reports, the Government ultimately settled the case for approximately £3 million. There was a strong dissent by Lord Justice Oliver, who argued that Article 30 accorded each person the individual right to carry on the business of importing goods free from quantitative restrictions. Furthermore, Lord Justice Oliver concluded that since Community law requires that individual Community rights be protected to the same extent as domestic rights of a similar nature, infringement of Article 30 should enable individuals to claim damages.