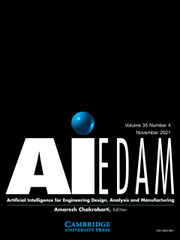 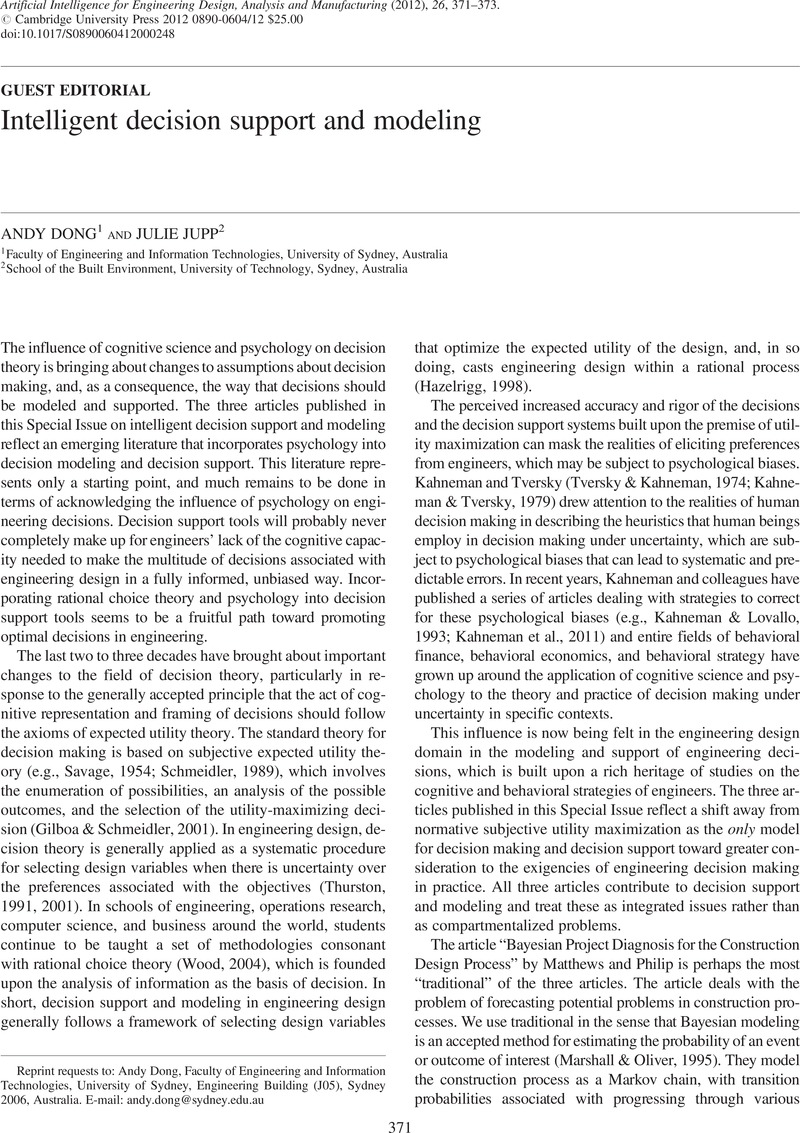 An abstract is not available for this content so a preview has been provided. To view the full text please use the links above to select your preferred format.
Type
Guest Editorial
Information
AI EDAM , Volume 26 , Issue 4: Intelligent Decision Support and Modeling , November 2012 , pp. 371 - 373
DOI: https://doi.org/10.1017/S0890060412000248[Opens in a new window]
Copyright
Copyright © Cambridge University Press 2012

The influence of cognitive science and psychology on decision theory is bringing about changes to assumptions about decision making, and, as a consequence, the way that decisions should be modeled and supported. The three articles published in this Special Issue on intelligent decision support and modeling reflect an emerging literature that incorporates psychology into decision modeling and decision support. This literature represents only a starting point, and much remains to be done in terms of acknowledging the influence of psychology on engineering decisions. Decision support tools will probably never completely make up for engineers' lack of the cognitive capacity needed to make the multitude of decisions associated with engineering design in a fully informed, unbiased way. Incorporating rational choice theory and psychology into decision support tools seems to be a fruitful path toward promoting optimal decisions in engineering.

The last two to three decades have brought about important changes to the field of decision theory, particularly in response to the generally accepted principle that the act of cognitive representation and framing of decisions should follow the axioms of expected utility theory. The standard theory for decision making is based on subjective expected utility theory (e.g., Savage, Reference Savage1954; Schmeidler, Reference Schmeidler1989), which involves the enumeration of possibilities, an analysis of the possible outcomes, and the selection of the utility-maximizing decision (Gilboa & Schmeidler, Reference Gilboa and Schmeidler2001). In engineering design, decision theory is generally applied as a systematic procedure for selecting design variables when there is uncertainty over the preferences associated with the objectives (Thurston, Reference Thurston1991, Reference Thurston2001). In schools of engineering, operations research, computer science, and business around the world, students continue to be taught a set of methodologies consonant with rational choice theory (Wood, Reference Wood2004), which is founded upon the analysis of information as the basis of decision. In short, decision support and modeling in engineering design generally follows a framework of selecting design variables that optimize the expected utility of the design, and, in so doing, casts engineering design within a rational process (Hazelrigg, Reference Hazelrigg1998).

The perceived increased accuracy and rigor of the decisions and the decision support systems built upon the premise of utility maximization can mask the realities of eliciting preferences from engineers, which may be subject to psychological biases. Kahneman and Tversky (Tversky & Kahneman, Reference Tversky and Kahneman1974; Kahneman & Tversky, Reference Kahneman and Tversky1979) drew attention to the realities of human decision making in describing the heuristics that human beings employ in decision making under uncertainty, which are subject to psychological biases that can lead to systematic and predictable errors. In recent years, Kahneman and colleagues have published a series of articles dealing with strategies to correct for these psychological biases (e.g., Kahneman & Lovallo, Reference Kahneman and Lovallo1993; Kahneman et al., Reference Kahneman, Lovallo and Sibony2011) and entire fields of behavioral finance, behavioral economics, and behavioral strategy have grown up around the application of cognitive science and psychology to the theory and practice of decision making under uncertainty in specific contexts.

This influence is now being felt in the engineering design domain in the modeling and support of engineering decisions, which is built upon a rich heritage of studies on the cognitive and behavioral strategies of engineers. The three articles published in this Special Issue reflect a shift away from normative subjective utility maximization as the only model for decision making and decision support toward greater consideration to the exigencies of engineering decision making in practice. All three articles contribute to decision support and modeling and treat these as integrated issues rather than as compartmentalized problems.

The article “Bayesian Project Diagnosis for the Construction Design Process” by Matthews and Philip is perhaps the most “traditional” of the three articles. The article deals with the problem of forecasting potential problems in construction processes. We use traditional in the sense that Bayesian modeling is an accepted method for estimating the probability of an event or outcome of interest (Marshall & Oliver, Reference Marshall and Oliver1995). They model the construction process as a Markov chain, with transition probabilities associated with progressing through various activities. Rather than simply enumerating the possible events, Mathews and Philip's approach attempts to identify “signals” of a potential future problem, an approach that is similar to that taken by others to identify potential problems in the management of complex engineering (Wasiak et al., Reference Wasiak, Hicks, Newnes, Loftus, Dong and Burrow2011). What is particularly interesting about Matthews and Philip's approach is that their elicitation of priors from construction experts includes how frequently they moved from one stage to the next and how frequently they had erroneously moved from one stage to another, which in essence is asking them to confront both saliency (when they overattribute problems associated with a move) and confidence biases (when they miscalculate how frequently they move). By showing the decision makers the link between their frequency estimations under the prescribed elicitation process and the rank ordering of likely problems, they can revisit their estimates to subject their priors to additional scrutiny rather than merely take the decision-support answer as conclusive.

The research perhaps most influenced by psychological studies is Van Bossuyt et al.'s article, on “Considering Risk Attitude Using Utility Theory in Risk-Based Design.” In subjective utility theory, the prescription to quantify risk in decision making is to generate a utility function, with a concave utility function indicating a risk-averse person and a convex function a risk-seeking person, based on a series of lotteries of paired probabilistic alternatives. Van Bossuyt et al. take an alternative approach by first administering a psychological test of risk attitude called the Engineering Domain-Specific Risk test, which is based on the Domain Specific Risk test instrument (Weber et al., Reference Weber, Blais and Betz2002). The premise of their approach is to modify the utility curve based on a psychometric risk attitude scale rather than lotteries. Their article demonstrates how to translate engineering risk data from the expected value domain into a risk appetite corrected domain using risk curves. The results from an empirical demonstration of their method show the risk attitude of the decision maker leads to an altogether different decision than had the problem been treated with an expected value approach.

The research by Boyle et al. in “The Impact of Resources on Decision Making” deals with an often neglected part of decision making: the resources required to assist the decision making, which includes information. A decision-analytic approach to this problem would recommend that the decision maker consider the (expected) value of perfect information before the decision is made as one way to quantify whether the current level of the resource is sufficient or whether further expenditures should be made to obtain better information. An intriguing result from their experiments is that the introduction of information can cause significant disruptions and alter the decision-making method and process. This type of impact on decision making is generally not considered by decision-support systems; rather, the belief is that more information is desirable. The evidence from this article suggests that decision-support systems should consider the impact of introducing new resources into the decision-making process, especially because the introduction of resources can have negative consequences.

We believe these three articles make important contributions to the problem of intelligent decision support and modeling. In part, they continue to draw attention to the actual behaviors of human engineers and support that they need to face the practical realities of engineering processes. Specifically, human engineers need to pay attention to the importance of behavior in engineering decision making.

Andy Dong is the Warren Centre Chair in Engineering Innovation in the Faculty of Engineering and Information Technologies at the University of Sydney. His research is in design-led innovation, where he has made significant methodological contributions in explaining the dynamic formation of design knowledge. He received the Design Studies Prize in 2005 for the most significant journal article in the field for this work in the context of creative teams. He is currently an Australian Research Council Future Fellow working on predictive analytics to forecast rates of potential progress of engineered products based on their underlying knowledge structure.

Julie Jupp is a Senior Lecturer in the School of the Built Environment at the University of Technology, Sydney. She teaches in the areas of building information modeling, integrated project delivery, decision support, and communication. Julie holds a PhD in architecture (design computing) from the University of Sydney and undertook her postdoctorate at the University of Cambridge's Engineering Design Centre. Prior to joining the University of Technology, Sydney, Julie was the Assistant Director of the Interdisciplinary Design for the Built Environment Master's Program at the University of Cambridge. She has implemented and introduced into practice innovative information technologies for building design and facilities management. Julie is an active researcher in design computing and cognition and brings research experience in case study methodologies, having worked closely with a number of Australian and UK AEC companies.