Home
Welfare Reform and its Long-Term Consequences for America's Poor

Welfare Reform and its Long-Term Consequences for America's Poor 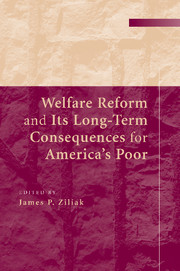 Two decades of federal and state-level demonstration projects and experiments concerning cash welfare in the United States culminated with the passage of the Personal Responsibility and Work Opportunity Reconciliation Act of 1996, better known as welfare reform. Ten years after reform there remain a host of unanswered questions on the well-being of low-income families. In Welfare Reform and its Long Term Consequences for America's Poor, many of the nation's leading poverty experts address these and related outcomes to assess the longer-term effects of welfare reform. A diverse array of survey and administrative data are brought to bear to examine the effects of welfare reform and the concomitant expansions of the Earned Income Tax Credit on the level and distribution of income, the composition of consumption, employment, public versus private health insurance coverage, health and education outcomes of children, marriage, and social service delivery.

'This volume brings together some of the best research from across the social sciences and provides a nuanced assessment of the key consequences of welfare reform. The authors lay out important lessons of the previous decade and the implications of the successes - and failures - of welfare reform. The volume is particularly timely as we confront the pressing challenge of designing policies that effectively support poor families in the current economic environment.'

'The poor did remarkably well in the immediate aftermath of welfare reform, but the booming economy may have been responsible. Since September 11, the economy has endured wage stagnation and recession. This book, edited by James Ziliak, provides a comprehensive and penetrating look at how the poor have fared in this new, less favorable, environment. The experts assembled in this volume examine everything from earnings, income, and consumption to health insurance and child well-being. This book may provide the definitive coda to the analysis of the great welfare reform experiment of 1996.'

'James Ziliak and his colleagues present a balanced 10-year retrospective on ‘end of welfare as we knew it.’ Using sophisticated research methods, they document that the 1996 federal welfare reform had both positive and negative effects on single mothers and their children. Welfare caseloads fell dramatically and mothers’ work efforts increased substantially. However, child poverty remains high and because many former welfare recipients have limited labor market prospects, some never found steady work. Congress must re-authorize welfare reform in 2010. Researchers and policy makers looking for ways to offset the negative effects of the 1996 reform should read this book.'

'More than 10 years have passed since the landmark federal welfare reform in 1996. This exceptional volume provides important new research on the long-run impacts of welfare reform on the well-being of America’s poor families. Top poverty experts are brought together and analyze a wide range of outcomes such as the health and school performance of children and the income, marital structure, and spending patterns of the family. The result is a cohesive, insightful, and somewhat surprising story of the current status of our safety net and disadvantaged families. Welfare Reform and Its Long Term Consequences for America’s Poor is a must-read for anyone interested in this critical issue of the day.'

'Welfare Reform and Its Long Term Consequences for America’s Poor, the first major treatment of welfare reform’s effects to draw extensively on both pre- and post-reform data, provides important information not available elsewhere. The volume opens with an excellent introductory essay by the editor and Rebecca Blank’s thoughtful review of the state of research on welfare reform. The empirical chapters that follow set their issues in the context of welfare reform and previous research and present a wealth of descriptive information and statistical findings. The contributing authors include well-established experts and younger ones who are among the best of a new generation of scholars on poverty and welfare. For anyone concerned about American poverty and social policy in the academy, research and advocacy organizations, and public agencies, this volume will be essential reading.'

'… this is an excellent volume with an impressive list of contributors examining the long-run impacts of welfare reform on families and children. … Though there are plenty of facts and data for the uninitiated, the main audience for the book is the welfare and poverty researcher community - and it promises to be very well read among this group.'