Home
Voices of the Race

Voices of the Race 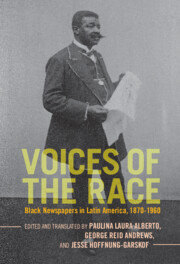 Voices of the Race offers English translations of more than one hundred articles published in Black newspapers in Argentina, Brazil, Cuba, and Uruguay from 1870 to 1960. Those publications were as important in Black community and intellectual life in Latin America as African American newspapers were in the United States, yet they are almost completely unknown to English-language readers. Expertly curated, the articles are organized into chapters centered on themes that emerged in the Black press: politics and citizenship, racism and anti-racism, family and education, community life, women, Africa and African culture, diaspora and Black internationalism, and arts and literature. Each chapter includes an introduction explaining how discussions on those topics evolved over time, and a list of questions to provoke further reflection. Each article is carefully edited and annotated; footnotes and a glossary explain names, events, and other references that will be unfamiliar to English-language readers. A unique, fascinating insight into the rich body of Black cultural and intellectual production across Latin America.

'The editors have mined scattered and precarious archives to bring together the voices of influential Black Latin American commentators as they grappled with questions of identity, community, and belonging in their own nations and with other communities of the African diaspora. To have these rare documents in conversation with each other is remarkable; to have them in translation, contextualized with thematic introductions, is priceless.'

'This collection is a treasure trove of sources on the Black press in Latin America. Each article offers insights into how Black reading publics engaged with topics like politics, education, and arts, while navigating racism in their communities. The translations and annotations draw new connections between Black newspapers in Latin America, the United States, and across the African Diaspora. This is a vital and important contribution to the field.'

'Three leading scholars organized this extraordinarily rich material in a way that enables the reader to fully appreciate the historical significance of the articles presented in these pages. Anyone interested in the intellectual worlds, political crusades, and cultural lives of Afro-Latin Americans will be indebted to these historians for editing this volume and making accessible these precious fragments of the struggles of Afro-descendants to make their voices heard.'

Barbara Weinstein - author of The Color of Modernity: São Paulo and the Making of Race and Nation in Brazil

Ben Vinson, III - Provost of Case Western Reserve University and author of Before Mestizaje: The Frontiers of Race and Caste in Colonial Mexico