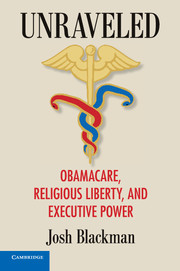 Six years after its enactment, Obamacare remains one of the most controversial, divisive, and enduring political issues in America. In this much-anticipated follow-up to his critically acclaimed Unprecedented: The Constitutional Challenge to Obamacare (2013), Josh Blackman argues that, to implement the law, President Obama has broken promises about cancelled insurance policies, exceeded the traditional bounds of executive power, and infringed on religious liberty. At the same time, conservative opponents have stopped at nothing to unravel Obamacare, including a three-week government shutdown, four Supreme Court cases, and fifty repeal votes. This legal thriller provides the definitive account of the battle to stop Obamacare from being 'woven into the fabric of America'. Unraveled is essential reading to understand the future of the Affordable Care Act in America's gridlocked government in 2016, and beyond.

‘Obamacare has remarkably, if perversely, made American political discourse more interesting. It has stimulated braided debates about the proper scope and actual competence of government, about the role of the judiciary in supervising democratic processes, and about how religious liberty becomes a casualty of ‘comprehensive' social legislation enlarging the entitlement state. Josh Blackman, who has been immersed in all this as a scholar and participant, gives readers an invaluable inside tour of an ongoing controversy.'

‘Josh Blackman has written a thorough and engaging account of the political and legal issues surrounding Obamacare. This book is a must-read for all who are interested in the history of the Obama presidency and especially of its most important legislative accomplishment. Blackman presents the conservative perspective but he is even-handed, and all, including those (like me) who disagree with him, will learn a great deal from reading this book.'

‘Health care involves some of the most personal and - to many people - sacred and spiritually significant issues of life and death. So it is no surprise that an attempt by government to standardize health care coverage for all Americans would raise a host of issues of conscience, choice, and conviction. Josh Blackman's new book Unraveled chronicles the legal struggles over these issues in a fair, complete, and immensely readable narrative. Three things are certain: death, taxes, and that these conflicts are far from over. This book will help us all to understand the stakes and the arguments.'

‘Even-keeled and exhaustive, Blackman's Unraveled offers the consummate insider's take on the titanic legal struggles at the Supreme Court over the future of health reform. It is an indispensable resource and a gripping read.'

‘Josh Blackman continues to bring a gimlet eye to the legal controversies surrounding the Affordable Care Act. He combines a careful, even meticulous attention to detail with a grasp of the important issues at stake. Even people who paid close attention to the debate will find much to learn from Unraveled.'