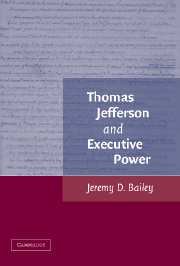 By revisiting Thomas Jefferson's understanding of executive power this book offers a new understanding of the origins of presidential power. Before Jefferson was elected president, he arrived at a way to resolve the tension between constitutionalism and executive power. Because his solution would preserve a strict interpretation of the Constitution as well as transform the precedents left by his Federalist predecessors, it provided an alternative to Alexander Hamilton's understanding of executive power. In fact, a more thorough account of Jefferson's political career suggests that Jefferson envisioned an executive that was powerful, or 'energetic', because it would be more explicitly attached to the majority will. Jefferson's Revolution of 1800, often portrayed as a reversal of the strong presidency, was itself premised on energy in the executive and was part of Jefferson's project to enable the Constitution to survive and even flourish in a world governed by necessity.

"Jefferson was acutely sensitive to the potential, even inevitable, contradiction between the exercise of presidential power and respect for popular democracy. As president he attempted their reconciliation, simultaneously practicing and innovating a strikingly original theory of politics. In the process, as Jeremy D. Bailey thoroughly and convincingly demonstrates, Jefferson created one of the strongest and most enduring ideational bulwarks of the modern presidency."
-Richard Bensel, Cornell University“In Thomas Jefferson and Executive Power, Jeremy Bailey challenges…the modern ‘scholarly consensus.’ Jefferson, according to Bailey, possessed and acted upon a coherent, comprehensive understanding of executive power that revolutionized the relationship of the presidency to American democracy…There is much going on here and much to learn. It requires close attention throughout to plumb the subtleties of Jefferson’s words and actions and to fully appreciate Bailey’s sensitive and nuanced interpretation. Readers will find it well worth the effort.”
Joseph M. Bessette, Claremont McKenna College, Claremont Review of Books

"Jeremy Bailey has crafted an original understanding of executive leadership in the thought and practice of Thomas Jefferson, locating that praxis as an integral element of Jeffersonian constitutionalism. In doing so, Bailey pushes past conventional paradoxical frames—a strict constitutionalist whose political ambition and opportunism undercut that same constitutionalism. What emerges instead is a fresh portrait of an iconic American political leader, one engaged in a coherent project to reconcile the conflicting requirements of discretionary action, popular consent, and fundamental law, one committed to realizing a unified vision of constitutional democratic leadership. Along the way, Bailey also manages to situate Jeffersonian era innovations within the line of historical predicates leading to the development of the modern presidency and its repertoire of signature practices and justifications. This book is engaging, well researched, and well written. In all, it stands as an important contribution to a vast literature, one that can be fruitfully read by students of presidential leadership, American political development, and American constitutional thought."
-Scott C. James, University of California, Los Angeles

"A powerful, shrewd, and original study of Jefferson’s idea of executive power, shown in theory and application. Jeremy Bailey covers the whole realm of the presidency in a book all students of American politics will want to read."
-Harvey Mansfield, Harvard University

"Was there a Revolution in the United States in 1800, as Thomas Jefferson claimed? In contrast with Henry Adams and nearly all historians since, Jeremy D. Bailey thinks that there was, and he makes a powerful case in Jefferson’s defense, arguing that as President he articulated in both theory and practice a new understanding of the executive power, strengthening the presidential office by making the executive the supreme exponent of popular opinion and by asserting broad executive discretion while deliberately making it responsible to popular judgment."
-Paul A. Rahe, University of Tulsa

"Lucid and systematic, Thomas Jefferson and Executive Power is indispensable for understanding how the American presidency built on democratic thought. With inspiring rhetoric and shrewd management, President Jefferson solved the problem of linking the president to the popular will by becoming the ‘custodian of public opinion.’ He built a presidency that was both strong and democratic, shaping the office all his successors have inherited."
David Robertson, University of Missouri – St. Louis

"To find consistency and integrity in Jefferson’s approach to executive power is no mean feat. But this book delivers much more. Jeremy Bailey’s analysis of Jefferson is an exploration of the different ways in which presidential power can be asserted and justified. By asking us to consider the difference between Jefferson’s efforts to root presidential power in public opinion and Hamilton’s efforts to root it in the constitutional text he speaks to some of the most pressing issues of our day."
-Stephen Skowronek, Yale University

"Thomas Jefferson was not only an important president. He was also an important theorist of the presidency. Jeremy Bailey has provided a much needed and insightful study of Jefferson’s thought on executive power. It sheds light on the early republic, and on our own."
-Keith Whittington, Princeton University

"Jeremy Bailey sets out to correct a very old misapprehension about Jefferson and executive powers, to wit, that Jefferson was an enemy to an energetic and strong executive—in theory at least. Bailey persuasively shows that Jefferson had a theory of executive strength that (more or less) matched his practice, but that it was quite a different theory and practice from that great champion of executive power, Alexander Hamilton. Bailey persuasively agues that Jefferson first built a strong executive on democratic grounds, thus anticipating the transformation in the Presidency usually attributed to Andrew Jackson. At a time when we are once again pondering the nature of executive powers and limits, this is a book well worth the attention of all citizens."
Michael Zuckert, University of Notre Dame

“Bailey crafts an innovative, atypical, controversial view of Jefferson’s exercise of executive power . . . pushes aside the traditional portrayals of Jefferson . . . adds a timely piece to the puzzle of presidential power, and provides important new scholarship about the iconic Jefferson.”
-Choice

"Jeremy D. Bailey has accomplished something truly remarkable. In ThomasJefferson and Executive Power, he has thoroughly and convincingly overturned the received historical wisdom....pathbreaking"
-Presidential Studies Quarterly

"...timely and highly readable...There will be more books onJefferson, but this is the best among the recent offerings."
-The Federal Lawyer

"Jeremy Bailey has written a fine analysis of [Thomas] Jefferson’s theory and practiceof presidential leadership that is relevant for the contemporary presidency."
-Erwin C. Hargrove, Vanderbilt University, Congress & the Presidency