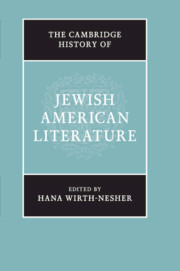 This History offers an unparalleled examination of all aspects of Jewish American literature. Jewish writing has played a central role in the formation of the national literature of the United States, from the Hebraic sources of the Puritan imagination to narratives of immigration and acculturation. This body of writing has also enriched global Jewish literature in its engagement with Jewish history and Jewish multilingual culture. Written by a host of leading scholars, The Cambridge History of Jewish American Literature offers an array of approaches that contribute to current debates about ethnic writing, minority discourse, transnational literature, gender studies, and multilingualism. This History takes a fresh look at celebrated authors, introduces new voices, locates Jewish American literature on the map of American ethnicity as well as the spaces of exile and diaspora, and stretches the boundaries of American literature beyond the Americas and the West.

'From a variety of perspectives, The Cambridge History of Jewish American Literature provides an illuminating analysis of [the] points of intersection, a vibrant cultural landscape that has enriched America and invigorated Jewishness. This collection is a logical starting point for anyone interested in exploring this history.'

'… an unexpectedly coherent mosaic that stands as close to a complete picture of the history of Jewish American literature as we can imagine at this point in the early twenty-first century.'

'In the face of the multifarious creativity so richly documented in this expansive volume, no reasonable person could hold on to his or her skepticism. I use the term multifarious on purpose to underscore what I regard as one of the key choices in the conception of the volume: to go wide and eschew canonicity.'

'… we have in hand a Cambridge History of Jewish American Literature that embraces, with exquisite critical attention and traditional scholarly values, such diverse phenomena as the graphic novel, stand-up comedy, film and video, gender-bending performance art, and popular music …'

'… this is a wonderful collection of essays, which extends our understanding of, and at times redefines, the field of Jewish American literature. The editor, Hana Wirth-Nesher, has done a fabulous job, assembling a stellar list of contributors and ensuring that … they engage afresh with their material, producing genuinely original work, rather than rehearsing previous research or living off former glories.'

'The volume is certainly rich and varied and expansive. To be sure, its thirty-one chapters treat familiar subjects like immigrant writing, Jewish American fiction at mid-century, Yiddish literature, New York City as a site for creative expression, overviews of Jewish American poetry, drama, popular culture, and humor. But not only. There are also sections that invite re-thinking of the geographic and linguistic boundaries of the field, thus expanding our idea of what 'Jewish American literature' (each term also under interrogation these days) represents as a subject of academic inquiry. In this respect the Cambridge History begins an important remapping of the field.'

'… a study like The Cambridge History has the opportunity both to re-shape the canon of Jewish American literature and to offer readers new historiographical lenses through which to read familiar material.'

'… scholars who … read America with an enthusiastic but skeptical eye for its occasional flashes of Jewish significance have achieved the exact sorts of edifying and lively results that fill the pages of the Cambridge History.'

'The Cambridge History of Jewish American Literature is indeed a landmark, a superior assortment of field-defining essays, and a testimony to scholarly activity and achievements in the rich transnational, transcultural, polylingual field of Jewish American literature.'