Why the Plays Matter 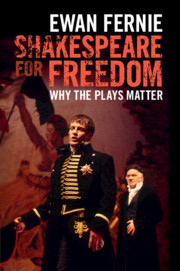 Shakespeare for Freedom presents a powerful, plausible and political argument for Shakespeare's meaning and value. It ranges across the breadth of the Shakespeare phenomenon, offering a new interpretation not just of the characters and plays, but also of the part they have played in theatre, criticism, civic culture and politics. Its story includes a glimpse of 'Freetown' in Romeo and Juliet, which comes to life in the 1769 Stratford Jubilee; the Shakespearean careers of the Leicester Chartist, Cooper, and the Hungarian hero, Kossuth; Hegel's recognition of Shakespearean freedom as the modern breakthrough; its fatal effects in America; the disgust it inspired in Tolstoy; its rehabilitation by Ted Hughes, and its obscure centrality in the 2012 Olympics. Ultimately, it issues a positive Shakespearean prognosis for freedom as a vital (in both senses), unending struggle. Shakespeare for Freedom shows why Shakespeare has mattered for four hundred years, and why he still matters today.

‘Professor Fernie's exhilarating new book is a timely and rigorous reminder of the political and philosophical potency and daring of both the characters and the plays. A passionate and compelling call to remember Shakespeare's radical credentials. A rich and fascinating tour of historical and contemporary encounters with Shakespeare's words and meanings, which should inspire scholars and theatre-makers alike to treat him once again as a liberating spirit, an existential provocateur and a playwright for our times.’

‘Ewan Fernie’s book rescues freedom from the impoverished, and blatantly ideological, uses to which it is all too often put - and shows how central Shakespeare has been to the history of true modern freedom. A scholar of great honesty, dialectical seriousness, and historical range, Fernie eloquently demonstrates that Shakespeare remains a powerful resource for anyone committed to both individual and collective liberty.’

‘Ewan Fernie's writing is, as always, invigorating and original, powerful and thoughtful. In familiar areas, he always has much that is new to say. In unfamiliar ones, he sends us off, eager to read what intrigues him.'

'While the cultural ubiquity of Shakespeare silently reinforces the liberal humanist assumption that these plays have survived because of their inherent or transcendent value, Fernie bravely, like the boy wondering out loud about the emperor’s new clothes, dares to ask, ‘What good is Shakespeare?’ As every barrister knows, never ask a question to which you don’t know the answer and fortunately, here, it is not long in coming: ‘Shakespeare means freedom’. Fernie’s scope is magisterial and panoramic; freedom is assessed in relation to David Garrick’s Jubilee of 1769, the 19th-century Hungarian revolutionary Lajos Kossuth, the Leicester Chartist Thomas Cooper, the philosophy of Hegel, the suffragettes, and the Shakespearean influence on Goethe, Freud, John Moriarty and Ted Hughes. … The parting shot of this compelling book maintains the plays ‘are politically unstable, always in process. What we do or do not make of them, in contemporary life and politics, is our responsibility’.'

'Fernie writes clearly and passionately, combining deep learning and theoretical sophistication with an intimate colloquial style. … the book is ultimately able to reanimate a progressive political Shakespeare without relying on easy answers or obscuring the darker undercurrents of Shakespearean freedom.'

'The Trumpian Caesar in Central Park takes his place in a long line of reflections of real-life leaders and despots in Shakespeare productions. Into this controversy wades Ewan Fernie of the University of Birmingham’s Shakespeare Institute in Stratford-upon-Avon, with a timely new study, Shakespeare for Freedom: Why the Plays Matter. Over nine chapters, Fernie pays homage to Shakespeare’s creations and to the real-life figures who drew inspiration from the Bard in their aspirations and struggles for freedom …'

'A serious and at times exhilarating attempt to rescue Shakespeare from the sort of obligatory respectfulness that accrues to ubiquity. As with the Beatles, it's often easy to forget the radical nature of Shakespeare's work. Fernie is bent on demonstrating Shakespeare's continuing vitality and usefulness in the world. Fernie sees Shakespeare as 'deep therapy' for the culture, stressing the ever-changing nature of how we relate to them: 'Shakespearean character is always made in interaction, as well as before an audience.' This dynamic nature cuts both ways. So Fernie leaves us with a warning: 'The plays … are not in any simple way utopian. They are politically unstable, always in process. If they are sometimes ethically promising, at others they are undeniably dangerous … What we do or do not make of them, in contemporary life and politics, is our responsibility'.'

'… Fernie has without doubt identified one of the central aspects of Shakespeare’s persistent appeal. This is a refreshing addition to Shakespeare studies. … Highly recommended. Upper-division undergraduates through faculty.'

'… Shakespeare for Freedom: Why The Plays Matter, by Ewan Fernie, is … [an] update on Jan Kott’s classic Shakespeare Our Contemporary. My favorite part is in the chapter titled 'Against Shakespearean Freedom'. The next time some dolt walks out of the theater grumbling, 'Well, that was no Shakespeare', remind that person what Tolstoy had to say on the subject: 'Shakespeare cannot be recognized as a great genius or even as an average author', sniffed the Count, charging Billy Big Boy with the crime of turning the theater, 'this important weapon of progress,' into 'an empty and immoral amusement'. To which we can only append, 'thank goodness'.'

‘Ewan Fernie is one of the most original and adventurous Shakespeare scholars at work today … In Shakespeare for Freedom, Fernie assembles a wide-ranging set of reflections for the sake of illuminating his ambitious central claim: 'Shakespeare means freedom. That is why the plays matter, and not just aesthetically but also in terms of the impact they historically have had'. … Shakespeare should be celebrated and studied 'less as heritage to be preserved at all costs than as a stimulus to new life' … If Shakespeare is 'for' freedom, then it is not as an ideal 'for'' or 'against' which to fight. But, as Fernie admirably helps us to see, something whose meaning we struggle to grasp in the contours of our lives together.'

'To appreciate the importance of Shakespeare for Freedom beyond Shakespearean and literary studies, consider what this journal’s title recognizes. Narratives work; they perform multiple works. Shakespeare for Freedom describes how Shakespeare’s stories do the narrative work of making freedom an expectation for a full human life … We - scholars, political activists, anybody trying to do the right thing - turn to stories because definitions become progressively less useful as any idea gets bigger, and freedom is among the biggest, up there with dignity, truth, and love … Fernie situates that vision of social freedom on a dual axis of historical breadth, in which Shakespeare’s plays act as a stimulus to freedom in different times and places, and textual depth, in which specific characters seek to be free, creating language that evokes their particular freedom. Fernie’s far-reaching contribution can provoke scholars from multiple disciplines to think differently.'

'In a field dominated by convention, Ewan Fernie's Shakespeare for Freedom: Why the Plays Matter (Cambridge University Press) asks, refreshingly, 'What good is Shakespeare?' - before providing an energetic answer: 'Shakespeare means freedom'. The book uses real and varied examples to politicise a cultural debate. The result is a pertinent Shakespearean canon that is far from neutral.'

'Breaking open the culturally contingent shackles of language and aesthetics, Fernie addresses the value of freedom, and how it is explored and expounded, confounded and conjured by the plays in which 'freedom is richly various'.'

‘There is something wonderfully disarming about Ewan Fernie’s writing and his approach to the subject of Shakespeare for Freedom.….  Possibly the best work Fernie does here [includes] his often brilliant exploration, in two successive chapters, of Hegel’s reading of Shakespeare and of their points of connection and divergence on the subject of freedom …’

‘In this absorbing, passionate book, Ewan Fernie ranges through the histories (and geographies) of Shakespearean appropriation, and offers insightful readings of some of the plays’ characters, in an effort to inspire contemporary audiences to revive Shakespeare’s liberating political potential now … It is hard not to experience a profound admiration for Fernie’s work …’