Communist Czechoslovakia and the Science of Desire, 1945–1989 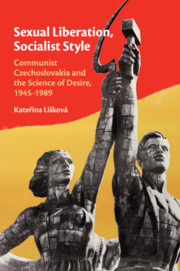 This is the first account of sexual liberation in Eastern Europe during the Cold War. Kateřina Lišková reveals how, in the case of Czechoslovakia, important aspects of sexuality were already liberated during the 1950s - abortion was legalized, homosexuality decriminalized, the female orgasm came into experts' focus - and all that was underscored by an emphasis on gender equality. However, with the coming of Normalization, gender discourses reversed and women were to aspire to be caring mothers and docile wives. Good sex was to cement a lasting marriage and family. In contrast to the usual Western accounts highlighting the importance of social movements to sexual and gender freedom, here we discover, through the analysis of rich archival sources covering forty years of state socialism in Czechoslovakia, how experts, including sexologists, demographers, and psychologists, advised the state on population development, marriage and the family to shape the most intimate aspects of people's lives.

‘An absolutely gorgeous book which transforms our understanding of the alternate modernity that was the Eastern bloc. Flush with stunning primary source material and dazzlingly original analysis, it challenges us to reconsider assumptions about ‘psy-entific' expertise in conditions of authoritarianism - but even more to recognize ordinary citizens' extraordinary creativity and agency in shaping their intimate lives.'

Dagmar Herzog - author of Cold War Freud: Psychoanalysis in an Age of Catastrophes

'Lišková is the first to write the history of Czechoslovakia’s sexual revolution. This enlightening, ambitious and original book challenges many of our preconceived notions about life under state socialism.'

Melissa Feinberg - author of Curtain of Lies: The Battle over Truth in Stalinist Eastern Europe

'Ambitious in its scale and prodigiously researched, this book will be a must for anyone who wants to know more about histories of gender and sexual freedom in twentieth-century Europe.'

Dan Healey - author of Homosexual Desire in Revolutionary Russia: The Regulation of Sexual and Gender Dissent

'Lišková challenges some of the most basic assumptions about the social organization of sexuality by showing that ‘sexual liberation’ in Czechoslovakia came from above, through the discourses of experts and the practices of the state. Her account demolishes the convenient imagery of prudish communist officials attempting to surround sexuality with walls of silence and hypocrisy. Similarly, she does away with the myth that authentic liberation and agency can only come from below. This is a thought provoking book that should be read profitably by all those interested in the relations between expertise, the state and sexual practices.'

'In a remarkable challenge to the familiar linear narrative of sexual emancipation, Lišková shows how an early egalitarian ethos celebrating the parity of men and women as the path to satisfaction reverted to a traditional patriarchal ideal of male superiority after the failed uprising of the Prague Spring. Highly recommended reading for anyone interested in non-totalitarian histories of the Eastern Bloc.'

‘… groundbreaking … Thanks to the richness of sources and the clarity of her argument, Lišková has written an excellent book on sex and communism, and she has deeply problematized both historians’ tendency to lionize the Western sexual revolution and to describe processes of constant liberalization. In other words, she has successfully demonstrated how one might write a different history of sexuality.’

Agnieszka Kościańska Source: Journal of the History of Sexuality

'… a clarion call to rethinking family values and how these tropes are intimately woven into our ideological ideas about justice and equality … This book should be read widely, and should make us all more critical about the relationship between equality and sexuality.'

Erika Dyck Source: Journal of the History of Medicine and Allied Sciences

'… an intriguing portrait of sexual life in state socialist Czechoslovakia during the second half of the twentieth century … On the whole, Lišková nimbly analyzes an admirable quantity and breadth of archival and published sources - including divorce court records, sexological conference minutes, letters written by sexologists, marriage manuals, socialist-era studies on the female orgasm, and radio transcripts - to trace the 'feedback loops between the state and experts'. She shows that they were not one and the same but rather engaged in a complex dance of research, policymaking, and discipline in which the intimate lives of all Czechoslovak socialist citizens were enmeshed.'

'This book should be read widely, and should make us all more critical about the relationship between equality and sexuality.'

Erika Dyck Source: Journal of the History of Medicine and Allied Sciences

‘… this ambitious and gorgeously written book deserves a place on the bookshelves of every historian of sexualities and more generally, those whose interests lie in late-modern European history.’