Youth Culture and the Unwritten Rules 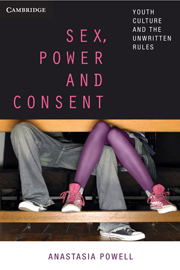 Sex, Power and Consent: Youth Culture and the Unwritten Rules draws on the real world stories and experiences of young women and young men - as told in their own words - regarding love, sex, relationships and negotiating consent. Judicious reference to feminist and sociological theory underpins explicit connections between young people's lived experience and current international debates. Issues surrounding youth sex within popular culture, sexuality education and sexual violence prevention are thoroughly explored. In a clear, incisive and eminently readable manner, Anastasia Powell develops a compelling framework for understanding the 'unwritten rules' and the gendered power relations in which sexual negotiations take place. Ultimately Sex, Power and Consent provides practical strategies for young people, and those working with them, toward the prevention of sexual violence.

‘… this is a terrific book: really well written and very engaging, full of useful, cogently expressed ideas about what is going on with young people and sex right now and how things might be improved. It has the capacity to make an important intervention and a strong impact, in part because it moves so well across fields and therefore has a wide readership, and in part because it addresses so many pressing current issues … The strongest aspects of the book are its topic and the freshness, openness and interdisciplinarity in its approach, its fantastic readability, and its careful attention to the discursive regimes within which young people operate as sexual actors.’

'This book is extremely relevant, up to date and presented in a well-written accessible style that is non-judgemental and seeks to explore all aspects of sexuality and sex behaviour using information gleaned from the words of the young people, Generation Y.'