Home
Sex Before the Sexual Revolution

Sex Before the Sexual Revolution 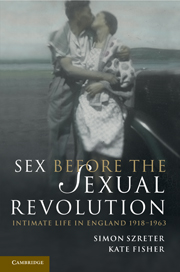 What did sex mean for ordinary people before the sexual revolution of the 1960s and 1970s, who were often pitied by later generations as repressed, unfulfilled and full of moral anxiety? This book provides the first rounded, first-hand account of sexuality in marriage in the early and mid-twentieth century. These award-winning authors look beyond conventions of silence among the respectable majority to challenge stereotypes of ignorance and inhibition. Based on vivid, compelling and frank testimonies from a socially and geographically diverse range of individuals, the book explores a spectrum of sexual experiences, from learning about sex and sexual practices in courtship, to attitudes to the body, marital ideals and birth control. It demonstrates that while the era's emphasis on silence and strict moral codes could for some be a source of inhibition and dissatisfaction, for many the culture of privacy and innocence was central to fulfilling and pleasurable intimate lives.

'I can scarcely recall reading a book which gives a richer, more comprehensive - and ultimately, more deeply moving - account of the human experience.'

Simon Callow Source: The Guardian, in which Sex Before the Sexual Revolution was selected as 'Book of the Week'

'A brilliant new book … based on the intimate experiences of people from the middle and working classes whose adolescence, marriage and childrearing took place during and after the period between the two world wars … provides a glimpse into an era when sex was not spoken about.'

'A peek through the curtains of the pre-Sixties bedroom, this convincing and gripping social history provides undeniable evidence that sex did not start in the Sixties.'

‘… an exciting, pioneering study … Szreter and Fisher advance a refreshingly candid account of English sex, love, and marriage and present the fascinating oral history material to its best advantage. In short, this is an excellent book which deserves to attract a very large readership.’

‘A surprising number of people think that Philip Larkin was right and the British didn’t discover sex until the 1960s … This book goes further than any other in breaking the silence and presenting middle and working class people who married between the 1930s and 1950s talking frankly about their sexual experience, revealing that sexual intercourse really did happen before 1963 - and some people even enjoyed it.’

‘A work of deeply engaging and distinguished scholarship, based on fascinating interviews and other primary data, which bring the last century to life in a vivid and often touching manner. In doing so, the authors shatter many myths about intimate life during previous generations and provide the context for the development of modern British sexuality … a major contribution to social history and to the history of sexology. This book should be required reading for all serious students and researchers.’

'Sex Before the Sexual Revolution provides the first rounded, firsthand account of sexuality in marriage in the years 1918–1963. The authors, two distinguished, award-winning academics, studied the testimonies of 89 men and women from all backgrounds. None of them was used to discussing intimate matters - after all, in their day people didn’t. Yet the researchers managed to get even the shyest interviewees talking in the end - with truly fascinating results.'

'This is a fine book, crammed with engaging empirical detail, and providing rich insights into the English marital bedroom in the decades between the First World War and the so-called ‘sexual revolution’ of the 1960s … Historians of sexuality, gender and demography will pay gratitude to Szreter and Fisher for providing us with this culmination of many years of important work.'

'Szreter and Fisher skilfully reconstruct a moral universe of sexual knowledge and quotidian experience in which ideals of naturalness, spontaneity, respect and trust framed the intimate lives of at least two generations of English men and women.'