Towards a Common Language for the Well-being and Sustainability Community 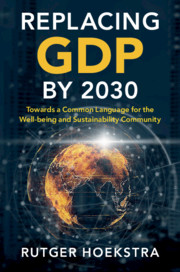 How did Gross domestic product (GDP) become the world's most influential indicator? Why does it still remain the primary measure of societal progress despite being widely criticised for not considering well-being or sustainability? Why have the many beyond-GDP alternatives not managed to effectively challenge GDP's dominance? The success of GDP and the failure of beyond-GDP lies in their underlying communities. The macro-economic community emerged in the aftermath of the Great Depression and WWII. This community formalised their 'language' in the System of National Accounts (SNA) which provided the global terminology with which to communicate. On the other hand, beyond-GDP is a heterogeneous community which speaks in many dialects, accents and languages. Unless this changes, the 'beyond-GDP cottage industry' will never beat the 'GDP-multinational'. This book proposes a new roadmap to 2030, detailing how to create a multidisciplinary Wellbeing and Sustainability Science (WSS) with a common language, the System of Global and National Accounts (SGNA).

‘This book shows why a ‘beyond-GDP world' is needed and how it can be built. A must-read contribution to the move towards a sustainable future.'

‘In crisp prose, Rutger Hoekstra conveys an important message. We won't convince policy makers to look beyond GDP simply by multiplying the production of well-being indicators. Something more is clearly needed.'

‘This book by environmental economist Hoekstra does not only offer a good read and an excellent introduction to the big debate about GDP and beyond GDP. It also provides a clear strategy to make beyond-GDP much more effective and to learn from the success of GDP as an indicator and language.'

Frits Bos - CPB Netherlands Bureau for Economics Policy Analysis and author of The National Accounts as a Tool for Analysis and Policy: in View of History, Economic Theory and Data Compilation Issues

'There are many publications criticising, for the right or for the wrong reasons, GDP and national accounts. But hardly anyone comes up with a valid way-out. Rutger Hoekstra not only puts forward a well thought-out alternative, but also provides a strategy for replacing the hegemony of GDP. Will it work?'

'This is a powerful and timely contribution to the debate about how to move beyond GDP - and what to use instead - in seeking to understand the economy and bring about improvements in people’s lives. There is no question that the conventional economic statistics have outlived their use; they obscure rather than enlighten. The importance of this book is in its thoughtful and detailed proposals for change.'

Diane Coyle - Bennett Professor of Public Policy, University of Cambridge and author of GDP: A Brief but Affectionate History

'The beyond-GDP discussion has been raging on for decades, and progress has been slow. Drawing upon years of experience as a high-level international statistician, Rutger Hoekstra offers an original and highly informed view from the trenches on the why and how. His innovative and ambitious proposal for a way out deserves to be widely read and discussed.'

'I therefore cannot recommend highly enough environmental economist Rutger Hoekstra’s book Replacing GDP by 2030. In my view it is the most interesting and thoroughly evidence based approach to taking the debate on replacing GDP forward. It should be required reading for every economic minister and spokesperson as well as every research body in Scotland.'