Home
The Politics of Human Rights in Australia

The Politics of Human Rights in Australia 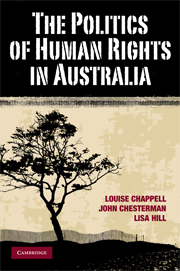 Australia has traditionally lacked a strong 'rights' culture. While fairness and equality have been proudly exalted as trademarks of the national mindset, the authors of The Politics of Human Rights in Australia argue that these same characteristics may equate to a form of cultural complacency. The book offers the first comprehensive account of Australia's protection of human rights from a political science perspective. Addressing the key debates surrounding human rights in Australia, the authors ask: Why are voting rights so critical in the Australian context? Should Australia adopt a bill of rights in an 'age of terror'? What are Australia's responsibilities to global and regional refugee crises? How can reconciliation between indigenous and non-indigenous Australians be facilitated? Written by three respected academics at the forefront of their fields, The Politics of Human Rights in Australia offers clarity and insight into the complex issues surrounding the human rights debate in Australia.