Protest and Revolution in the Arab World 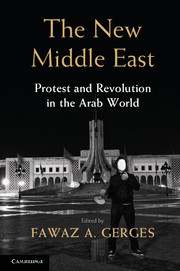 The New Middle East is one of the first comprehensive books to critically examine the Arab popular uprisings of 2011–12. While these uprisings prompted a number of cursory publications, this volume contains meticulous and thoughtful reflections on the causes, drivers and effects of these seminal events on the internal, regional and international politics of the Middle East and North Africa. Although specific conditions in individual countries that have experienced large-scale popular mobilizations are investigated, they are neither treated in isolation nor separated from broader developments in the region. Instead, the authors highlight connections between individual case studies and systemic conditions throughout the Arab arena. These include the crisis of political authority, the failure of economic development and new genres of mobilization and activism, especially communication technology and youth movements. The careful analysis and reflection on the prospects for democratic change in the region ensures the book will have both an immediate and enduring appeal.

'Fawaz Gerges, in The New Middle East, offers a much-needed balanced analysis that views the 2011 uprising as a revolutionary moment that started a potentially long-term march toward democracy that may take years to fully develop.'