Fascist Experiments in Art and Politics 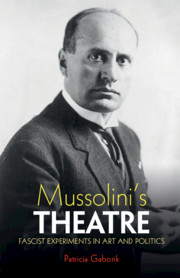 Benito Mussolini has persistently been described as an 'actor' – and also as a master of illusions. In her vividly narrated account of the Italian dictator's relationship with the theatre, Patricia Gaborik discards any metaphorical notions of Il Duce as a performer and instead tells the story of his life as literal spectator, critic, impresario, dramatist and censor of the stage. Discussing the ways in which the autarch's personal tastes and convictions shaped, in fascist Italy, theatrical programming, she explores Mussolini's most significant dramatic influences, his association with important figures such as Luigi Pirandello, Gabriele D'Annunzio and George Bernard Shaw, his oversight of stage censorship, and his forays into playwriting. By focusing on its subject's manoeuvres in the theatre, and manipulation of theatrical ideas, this consistently illuminating book transforms our understandings of fascism as a whole. It will have strong appeal to readers in both theatre studies and modern Italian history.

'Mussolini was a protean figure, with a sponge-like capacity to absorb and shape himself to the cultural currents of his time; and in 1920s–30s Italy, one of the most vital of these currents was the theatre. Patricia Gaborik’s book vividly explores the stage-world of Fascist Italy, placing the dictator at its heart as critic, impresario, dramaturge, and censor. Bringing this aspect into arresting focus, Mussolini’s Theatre achieves the rare feat of saying something illuminating and new about Il Duce and Fascism.'

'This formidable study is extremely rich in its documentation, extremely perceptive in its analysis, and extremely courageous in recognizing the breadth and intelligence of Mussolini’s cultural project. Instead of repeating the usually caricatured image of the Duce as a performer, Patricia Gaborik shows how complex the Fascist interventions in the theatre were within the context of a politics built upon charisma. Deeply researched and acute in overcoming the conventional opposition between aestheticization of politics and politicization of aesthetics, Mussolini’s Theatre is not just relevant for theatre specialists, but very important for historians of modern Italy as well.'

Professor Sergio Luzzatto - University of Connecticut; winner of the Cundill Prize in History, and author of The Body of Il Duce

‘Engagingly written and based on a deep reading of primary sources and the relevant Italian and English scholarship, this incomparably learned monograph is critical for Italian Fascist, modern Italian, and theater studies … Highly recommended.’

‘Gaborik has a distinct and pleasant authorial voice with a knack for narrative. Her book demonstrates excellent research across a wide range of sources, with persuasive and convincing arguments that will prove crucial for scholars and students of twentieth-century European drama and history. At the same time, her descriptions tell an intriguing story as they detail scenes, depict complexities of the anti-hero’s inner life, and suspensefully reveal theraw power that Mussolini appreciated in the relationship between theatre, politics, and the people.’