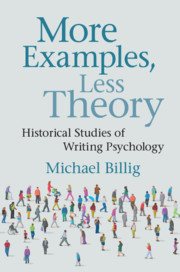 In his new book, Michael Billig uses psychology's past to argue that nowadays, when we write about the mind, we should use more examples and less theory. He provides a series of historical studies, analysing how key psychological writers used examples. Billig offers new insights about famous analysts of the mind, such as Locke, James, Freud, Tajfel and Lewin. He also champions unfairly forgotten figures, like the Earl of Shaftesbury and the eccentric Abraham Tucker. There is a cautionary chapter on Lacan, warning what can happen when examples are ignored. Marie Jahoda is praised as the ultimate example: a psychologist from the twentieth century with a social and rhetorical imagination fit for the twenty-first. More Examples, Less Theory is an easy-to-read book that will inform and entertain academics and their students. It will particularly appeal to those who enjoy the details of examples rather than the simplifications of big theory.

'In this highly readable work, Michael Billig makes a compelling argument that good examples do far more to advance and enliven theory than fancy jargon ever could. Students and seasoned writers of psychology will find inspiration in his engaging investigation into some of the most effective communicators in psychology's past.'

'A common tendency of psychologists is to describe phenomena through the lens of their own pre-existing theories, thus making phenomena resemble their theories rather than vice versa. In this book, Michael Billig argues for a fundamental reversal of psychology’s methodological habits, emphasising the value of ‘particularising’ psychological insights through the use of richly detailed examples, thus subsuming the general within the specific rather than the opposite. It is a lesson that could invigorate psychology, underscoring how the use of concrete examples helps us see and empathise and remember in ways that theoretical accounts rarely do. Through various case studies, Billig shows how we can learn as well as teach by example.'

'The truth is in the details, not in abstract theory. In his new book, Michael Billig shows us how examples can lead to a better understanding of psychological issues. Analysing the thinking and writing of eminent psychologists, he offers the reader a rich and intriguing alternative history of psychology.'

'This thought-provoking and important book by one of the principal scholars in contemporary psychology and social science makes a strong case for investigating human lives as they are lived, rather than searching for universally applicable theories by means of narrowly controlled experimental research.'

'Billig insists that examples are in rhetorical tension to theory. Here there is something gently subversive about More Examples, [Less Theory]. For the book is not just about writing or the use of examples. It is also a scornful critique of that most sacred of modern academic shibboleths: doing theory and being theoretical.'

‘Michael Billig’s book puts many basic psychological ideas and approaches in their time and place and describes the minds, personalities, situations and histories of their protagonists. It helps the reader to see where psychology had come from, and why it is like it is. At the end Billig adds a few modest but welcome recommendations for young psychologists. I hope this book becomes a standard text for psychologists early in their studies. I for one should have been greatly helped if Michael Billig’s book had been available when I started out.'

‘Starting with the examples of nine very different writers, he selects an exemplary work from each of them and discusses the use (or sometimes neglect) of examples within that work. Furthermore, since most of the chapters are based on material presented in Billig's previously published works, they provide examples of one thoughtful scholar's concerns and interests over a long and productive career.’

Raymond E. Fancher Source: Journal of the History of the Behavioral Sciences