Home
Modernism and the Reinvention of Decadence

Modernism and the Reinvention of Decadence 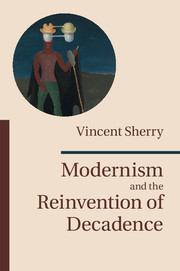 In this major new book, Vincent Sherry reveals a fresh continuity in literary history. He traces the idea of decadence back to key events from the failures of the French Revolution to the cataclysm of the Great War. This powerful work of literary criticism and literary history encompasses a rich trajectory that begins with an exposition of the English Romantic poets and ends with a re-evaluation of modernists as varied as W. B. Yeats, Henry James, Joseph Conrad, Rebecca West, Djuna Barnes, Samuel Beckett and, centrally, Ezra Pound and T. S. Eliot. Sherry's hugely ambitious study will be essential reading for anyone working in modernist studies and twentieth-century literature more generally.

‘Modernism and the Reinvention of Decadence is a surprising yet inevitable book, at once expansive and meticulous. For decades we've been thinking about the relationship of modernism to the culture of the fin de siècle, but this book allows us to perceive that relationship more vividly than ever before. Vincent Sherry, who negotiates the thickets of intellectual and material history as elegantly as he inhabits the language of poems, is the only scholar of Anglo-American modernism who could have written it. The book is brilliant.'

‘In Modernism and the Reinvention of Decadence, Vincent Sherry offers a powerful, learned rereading of an entire literary tradition, in effect restoring decadent aesthetics to the foreground of literary modernism where it had been forgotten, lost, or actively suppressed. His presentation involves a bravura recovery of decadence's literary history, [providing] masterly accounts of literary agonisms and generational, tectonic shifts. He manages to canvass enormous swaths of literature and media and print archive, establishing both great interpretive authority on the rarefied texts of modernism but also the sounds and keynotes of public discourse in a broader sense. This is a weighty and consequential book, brimming with local insights and rising to the level of a tightly integrated, field-altering (not a phrase I use lightly), revisionary argument.'

'Sherry makes a compelling case that Pound purposefully distanced himself from early works that demonstrated the influence of decadence and then later worked with Eliot to excise similar tendencies from The Waste Land … Recommended. Graduate students and above.'

'The work Sherry has done to recover decadence as a formative principle of modernism certainly merits praise: the book offers a significant and compelling revision of literary history that is likely to stand for some time to come.'

‘Sherry’s work is rich and uncompromising, interwoven with carefully mediated readings of the poetry and prose on which it focuses.’

'This is a book that will immediately become indispensable for scholars of modernism and decadence alike. … Sherry’s book requires not only that we recognize the long tail of decadence, but, more broadly, that we reexamine our usual ways of drawing boundaries between literary periods, whose existence may reinforce the polemical positions taken by those who inhabited them.'

'Sherry’s study is at once broad in scope and refined in the detail of its exegeses, and moves deftly between some of the best-known documents of modernism and rich findings from the archive.'