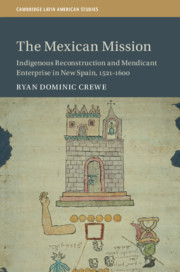 In the sixty years following the Spanish conquest, indigenous communities in central Mexico suffered the equivalent of three Black Deaths, a demographic catastrophe that prompted them to rebuild under the aegis of Spanish missions. Where previous histories have framed this process as an epochal spiritual conversion, The Mexican Mission widens the lens to examine its political and economic history, revealing a worldly enterprise that both remade and colonized Mesoamerica. The mission exerted immense temporal power in struggles over indigenous jurisdictions, resources, and people. Competing communities adapted the mission to their own designs; most notably, they drafted labor to raise ostentatious monastery complexes in the midst of mass death. While the mission fostered indigenous recovery, it also grounded Spanish imperial authority in the legitimacy of local native rule. The Mexican mission became one of the most extensive in early modern history, with influences reverberating on Spanish frontiers from New Mexico to Mindanao.

'Crewe’s multifaceted reassessment of early mendicant evangelization demonstrates how it served not only to impose Spanish hegemony, but also to animate ethnic persistence. In the midst of exploitation and high epidemic death tolls at mid-century, indigenous leaders and communities undertook a massive effort to build churches and monasteries as a deliberate means of perpetuating native agency.'

'An enigma of the early years of Spanish rule in Mesoamerica has been the construction of scores of magnificent, monumental Christian church compounds of cut and sculpted stone by indigenous peoples whose numbers dwindled horribly from disease and displacement during the height of the building campaign. Ryan Dominic Crewe’s well-documented study plumbs the political and social reasons why local communities and their leaders participated in the building campaign at such great cost, contributing to the establishment of the Spanish empire and their own subjection, but also checking its power over them and renewing their own traditions.'

William B. Taylor - author of Theater of a Thousand Wonders: A History of Miraculous Images and Shrines in New Spain (Cambridge, 2016)

'This book deftly tackles a mystery: hundreds of large churches mushroomed in mid-sixteenth-century Mexico at the very height of three demographic catastrophes. The buildings reflected a major reorganization of geopolitics by old and new indigenous elites seeking dominance over neighbors, ethnic rivals, and commoners. This brilliant new account of religious conversion puts indigenous communities, not friars, at the center of the 'spiritual conquest of Mexico'.'

'Bold in its thesis and ambitious in its scope, The Mexican Mission situates this quintessentially colonial institution in its Atlantic and global contexts while expanding the history of the Christian project to capture the experiences and perspectives of native commoners and a wide range of native communities.'

‘Scholars and students alike will find this book eminently readable, a fine addition to the scholarship on early colonial New Spain.’

‘… this is a book of discrete microhistories that work well cumulatively to substantiate the central, indigenous agency thesis … this is a fine one.’