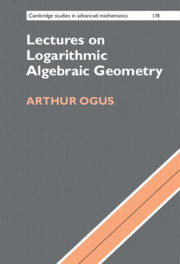 This graduate textbook offers a self-contained introduction to the concepts and techniques of logarithmic geometry, a key tool for analyzing compactification and degeneration in algebraic geometry and number theory. It features a systematic exposition of the foundations of the field, from the basic results on convex geometry and commutative monoids to the theory of logarithmic schemes and their de Rham and Betti cohomology. The book will be of use to graduate students and researchers working in algebraic, analytic, and arithmetic geometry as well as related fields.

'Logarithmic geometry is a framework tailored for studying two fundamental aspects in algebraic geometry; compactification and degeneration. It has spectacular applications to p-adic Hodge theory, ramification, etc. Written by a top researcher in the field, this book deals with the foundation of the theory. Emphasis is placed on the geometry of monoids, on which log geometry is based, and on logarithmic smoothness, a key concept of the theory. The reader will be enabled to explore the fertile field.'

'Logarithmic geometry was created thirty years ago in order to construct analogues in mixed characteristic of the limiting Hodge structures of the complex setting, and has since then become a powerful tool in many branches of arithmetic geometry. This long-awaited monograph presents a gentle, self-contained, and systematic exposition of the basics of the theory of log schemes (including a detailed discussion of the geometry of monoids and fans), and elegant applications to de Rham and Betti cohomology.'

'In the last three decades, logarithmic geometry has become a key tool in many areas of arithmetic and algebraic geometry (moduli problems, p-adic Hodge theory …). Arthur Ogus' book, patiently matured and without equivalent today, provides the first systematic study of the subject. In particular, it contains a careful study of monoids and henceforth provides the invaluable references that were lacking to put the whole theory on a firm basis. It concludes with some of the possible applications showing the power of the theory.'

'Ogus's book is a comprehensive treatise on logarithmic geometry. While the theory of log schemes was introduced in the 1980's, and has proven an immensely fertile subject, there has been until now no standard reference work. Researchers have had to search for results spread out through a vast number of papers across the last thirty years. This book will clearly now be the standard reference. It develops most of the important aspects of the subject, delving more deeply into many topics than can be found in the literature. It will need to be on the desk of every researcher using log geometry.'

'The choice of topics in the book under review makes the book readable and self-contained, and it may become the standard reference on logarithmic geometry.'

'The goal of this text is to introduce the basics of logarithmic geometry to those familiar with the theory of schemes. The book is self-contained and the approach is scheme-theoretic.'