One Hundred Years of War 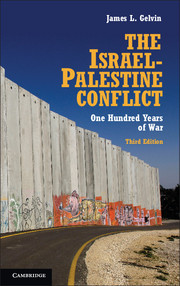 Now entering its third edition, James L. Gelvin's award-winning account of the conflict between Israelis and their forebears, on the one hand, and Palestinians and theirs, on the other, offers a compelling, accessible and current introduction for students and general readers. Newly updated to take into account the effects of the 2010–11 Arab uprisings on the conflict and the recognition of Palestinian statehood by the United Nations, the book traces the struggle from the emergence of nationalism among the Jews of Europe and the Arab inhabitants of Ottoman Palestine through the present, exploring the external pressures and internal logic that have propelled it. Placing events in Palestine within the framework of global history, The Israel-Palestine Conflict: One Hundred Years of War skilfully interweaves biographical sketches, eyewitness accounts, poetry, fiction, and official documentation into its narrative.