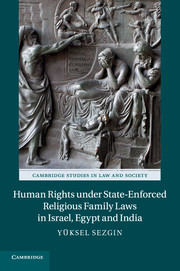 About one-third of the world's population currently lives under pluri-legal systems where governments hold individuals subject to the purview of ethno-religious rather than national norms in respect to family law. How does the state-enforcement of these religious family laws impact fundamental rights and liberties? What resistance strategies do people employ in order to overcome the disabilities and limitations these religious laws impose upon their rights? Based on archival research, court observations and interviews with individuals from three countries, Yüksel Sezgin shows that governments have often intervened in order to impress a particular image of subjectivity upon a society, while people have constantly challenged the interpretive monopoly of courts and state-sanctioned religious institutions, re-negotiated their rights and duties under the law, and changed the system from within. He also identifies key lessons and best practices for the integration of universal human rights principles into religious legal systems.

‘This is an intelligent, engaging, and conscientious comparative study of personal-status laws and their application in three postcolonial, post-WWII states: Israel, post-revolution Egypt, and post-independence India. The book shows convincingly how consistently some human rights, especially those of women, have been compromised or denied utterly in all three states, each of which has in various ways ceded control over personal-status issues such as marriage and divorce to its various religious communities and their leaders. The similarities as well as differences of the resulting situations in these three countries are remarkable, and Sezgin does a masterly, even-handed job of presenting both in a most accessible fashion; his thoughtful work even offers human-rights advocates sound and practical advice on possible lessons to be drawn from what has worked and what has not in gaining more adequate justice or even reform in these three states.’

‘This book provides a valuable study of family law broadly and its impact on women’s human rights in particular, in three diverse, yet similar legal contexts … The author manages to balance the view that plural justice systems are a reality in many contexts, and that they can be discriminatory in law and practice, on one hand. On the other hand, the book illustrates that such systems are open to transformative change, for the benefit of women. Engaging with state-enforced religious systems, as the author attempts, provides a space for further debate about the fact that so-called ‘God’s law’ is not static, immutable, monolithic or homogenous. More importantly, the book avoids both common cultural relativist claims and also essentialist claims about certain cultures.’

‘In this incisive study of law and religion, Yuksel Sezgin makes a powerful, empirically-grounded argument that when states have enacted ‘personal status’ laws based on religion, they have restricted the human rights of their citizens, particularly women. His argument is based not only on clear readings of political history but also on extensive interviews with local actors: a major work in the field.’

‘Sezgin offers a much-needed perspective on the tensions between personal status laws, customary practices and constitutional rights. By focusing on three case studies … [he] draws from a wealth of empirical data to illuminate the commonality of issues, including the dynamics of identity, the effects of plural ethno-religious legal systems on the human rights of women, and how a variety of regimes - ‘autocratic’ as well as ‘democratic’ - have failed to respect, protect and fulfil human rights. Moreover, by documenting strategies and best practices designed on the ground by women human rights advocates and their allies, this book provides an invaluable contribution in terms of offering practical recommendations, making it essential reading for human rights defenders, academics, and policy-makers alike.’

‘This is a very welcome, thoughtful and in-depth study into the complexities and challenges entailed in ensuring human rights in the context of pluri-legal systems … Providing valuable insights into how pluri-legal systems interface with other agendas of the State, how State enforcement of religious personal status laws impact fundamental rights and freedoms and what strategies have and can be used to promote rights effectively, this study will catalyse further thinking, and hopefully, actions.’

'Professor Sezgin has produced a definitive account of how the legal and judicial systems dealing with family law affect fundamental rights … This is an important book for students of comparative government and comparative law.'

'… an insightful and meticulous qualitative analysis … an important contribution to research on a matter that is not only of academic but also of significant public concern.'

'This detailed comparison of systems in which religious principles and/or authorities share in the authoritative resolutions of family disputes is a welcome addition to a more general literature on religion/regime relations. As such, this volume is worthy of the attention of a wide range of scholars interested in the interactions between the sacred and the secular.'

'Sezgin’s work makes an important contribution to the growing dialogue on the best way to reform the inequities created by the imposition of religious norms in state legal systems. His book coherently and systematically contextualises the developments in three countries which continue to grapple with this challenge, and he gives the lay reader and scholarly community important information and comparative analysis of those efforts. The conclusion he draws from his data opens an important additional chapter in the growing debate between multicultural optimists who believe that cultures will hopefully and eventually correct themselves'

'… Human Rights under State-Enforced Religious Family Laws is an important intervention to the literature on state-enforced family law and its effects on human rights. The book is of particular analytical and empirical importance to the discussions on secular(ism) and religion, nationalism and nation-building, and human rights. Moreover, it offers practical information to human rights practioners.'