Home
God vs. the Gavel

God vs. the Gavel

The Perils of Extreme Religious Liberty 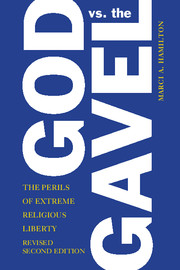 Clergy sex abuse, polygamy, children dying from faith healing, companies that refuse to do business with same-sex couples, and residential neighborhoods forced to host homeless shelters - what do all of these have in common? They are all examples of religious believers harming others and demanding religious liberty regardless of the harm. This book unmasks those responsible, explains how this new set of rights is not derived from the First Amendment and argues for a return to common-sense religious liberty. In straightforward, readable prose, God vs. the Gavel: The Perils of Extreme Religious Liberty sets the record straight about the United States' move toward extreme religious liberty. More than half of this thoroughly revised second edition is new content, featuring a new introduction and epilogue and contemporary stories. All Americans need to read this book, before they or their friends and family are harmed by religious believers exercising their newfound rights.

'In this highly readable and timely book, Marci A. Hamilton sheds much needed light on the ways in which religious groups and institutions - often aided and abetted by 'dealmaker' politicians - enjoy special treatment under the law, often to the detriment of others and the broader society. Highlighting the key distinction between religious belief and behavior, Hamilton argues that while freedom of religious belief deserves absolute constitutional protection, actions undertaken in the name of religion must be limited when they cause harm. This deceptively simple message, illuminated by Hamilton's impressive scholarship, deserves the attention not only of scholars, lawmakers, and religious practitioners, but also of average citizens whose everyday lives are - often unwittingly - impacted by the issues she raises.'

Hella Winston - journalist and author of Unchosen: The Hidden Lives of Hasidic Rebels

'No one in the public square has articulated more presciently than Professor Marci Hamilton the dangers of socially harmful religious exemptions; and no book argues the case for ordered religious liberty more vividly than God vs. the Gavel. This updated edition of Hamilton's text arrives at a watershed moment in our country's church-state conversation, when even for-profit corporations are invoking the First Amendment's protections to avoid complying with neutral, generally applicable laws. If the special religious interests win this fight, the recent progress of faith-based institutions toward transparency and accountability in the area of child protection will be undone. For the sake of children, of believers, and of the general American public, the Supreme Court must get this right.'

'Marci A. Hamilton has been a prophet ahead of her time on the harms posed by the state and federal Religious Freedom Restoration acts. She has also been more consistent and comprehensive in her position than many others. In lucid, strong prose, she provides an understanding of what religious freedom has meant historically and of the need for 'ordered liberty' today.'

'This seminal work by Marci A. Hamilton is provocative, enlightening, and highly important. God vs. the Gavel serves as a clarion call against the radical religious fervor that, while enjoying protection, perpetrates abuse on the most vulnerable in society and through a ruinous weakening of separation of church and state threatens the foundations of democracy - in short, of society itself. Only Hamilton could have pierced the high-holy sanctimonious shield so articulately and scholarly as this.'

'For two decades, Marci Hamilton has been battling theocrats seeking to impose their religious dogma under the guise of religious liberty. Hamilton knows there can be no true religious liberty, without the freedom to dissent. Her efforts to raise the alarm have been invaluable to all of us who work to defend the Jeffersonian wall of separation between church and state.'

'Hamilton's no-nonsense, lay-friendly style makes for an easy read that clearly explains one of America's most significant constitutional rights: the First Amendment. But religious freedom doesn't permit raping children. Hamilton shows us how we can protect spiritual belief while punishing criminal behavior by religious figures. I love this!'

'With this updated edition of God vs. the Gavel, Marci A. Hamilton affirms her commitment to protecting Americans from legal actions that proponents claim are needed to preserve religious liberty. As Ms Hamilton points out, these legalities are not only unnecessary but they empower religious extremists in ways we have not seen before. As a researcher of religious child maltreatment, I particularly applaud the author's inclusion of a chapter that painfully describes how these misguided decisions threaten the lives of children who are unfortunate enough to be born to the ultra-pious. There is no question that the Religious Freedom Restoration Act, religious exemptions in child abuse laws, and certain court decisions have the potential to rob children of the right to a proper education, needed medical care, and safety for years to come if we do not follow Ms Hamilton's lead and pay close attention to how these legal decisions are made and how they affect our families and communities.'

'Professor Marci A. Hamilton continues to be an extraordinary constitutional scholar. This important and powerful work reflects tireless and meticulous research. Hamilton supplies important new information, she connects the dots, and she reveals a hard truth: the enormous dangers behind the dark shield of religious liberty. Hamilton allows a piercing look behind the ridiculous claim of religious protection made by for-profit corporations and other duplicitous tactics used by the Catholic dioceses. This is an intelligent, necessary, and perhaps even urgent book.'

'Legally authoritative, common-sense persuasive. … God vs. the Gavel is a must-read for every legislator and child advocate working to promote the rights of children to be protected from maltreatment, including child sexual abuse and religiously motivated medical neglect. Those demanding benefits under extreme religious freedom arguments would do well to consider Dr Hamilton's exhortation not to violate important social duties or to avoid the fundamental moral behaviors demanded by their own religions.'

‘In 2005, Professor Hamilton warned us that extreme notions of religious liberty promote tyranny instead of freedom. With nine more years of RFRA, RLUIPA, and landmark Supreme Court decisions behind us, Hamilton's argument, and the second edition of God vs. the Gavel, are needed now more than ever. Her unique background and experience as litigator and scholar make Hamilton the best person to explain why the rule of law, not the rule of religion, satisfies the First Amendment.'

'… a must-read for anyone interested in the changes in relations between religion and the state in late twentieth and early twenty-first century US law. Hamilton opens up the black box of religious organization, reminding us that oppression, domination, inequality, and abuse can occur in every context in which power is absolute and unquestioned, and that includes the religious. Assessed through the lens of court decisions and doctrine, she shows that politicized religious groups allied with one another are shifting the balance of power in the United States: the scales are tipped dangerously in favor of the institutional power of religious entities while the rights of the less powerful are left without protection. This is a sobering account of the risks posed by political religion … Fascinating, terrifically well informed, and well argued. This book shows that we cannot remain complacent about the religious right but must fight to protect our civil liberties against all intolerance, especially when it is labeled religious.'