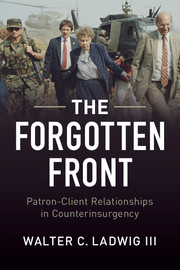 After a decade and a half of war in Iraq and Afghanistan, US policymakers are seeking to provide aid and advice to local governments' counterinsurgency campaigns rather than directly intervening with US forces. This strategy, and US counterinsurgency doctrine in general, fail to recognize that despite a shared aim of defeating an insurgency, the US and its local partner frequently have differing priorities with respect to the conduct of counterinsurgency operations. Without some degree of reform or policy change on the part of the insurgency-plagued government, American support will have a limited impact. Using three detailed case studies - the Hukbalahap Rebellion in the Philippines, Vietnam during the rule of Ngo Dinh Diem, and the Salvadorian Civil War - Ladwig demonstrates that providing significant amounts of aid will not generate sufficient leverage to affect a client's behaviour and policies. Instead, he argues that influence flows from pressure and tight conditions on aid rather than from boundless generosity.

‘Walter C. Ladwig III has identified one of the most vexing problems outside powers face in a counterinsurgency campaign: prodding the government afflicted by the insurgency to reform. More importantly, through the effective use of history, he has derived a way to increase the effectiveness of American assistance in counterinsurgency campaigns, with immediate implications for the ongoing campaign in Afghanistan. This work is in the best tradition of applying social science to solve real world problems.'

John Nagl - lieutenant colonel, US Army (retired) and author of Learning to Eat Soup with a Knife: Counterinsurgency Lessons from Malaya and Vietnam

'Ladwig’s important book … shines a bright light on some of the deficiencies in counterinsurgency literature and the United States’ naiveté about its relationship with its clients.'

Will Selber Source: War on the Rocks (www.warontherocks.com)

'The book is essential reading for specialists of international relations and of strategy, as it critically examines the patron-client relationship in the context of COIN and contributes immensely to the scholarship on irregular warfare. I am hopeful that this book will pave the way for new works on other actors, for example Britain, and, especially, on contemporary conflicts, including the Syrian Civil War.'

'This clearly written, well-researched study brings welcome attention to the counterinsurgent government's interests and the client government's ability to resist patron pressure … more rigorous in its theoretical and empirical analysis than much other work in this area.'

'All in all, this is an excellent and well-timed contribution. Moreover, despite being an academic work, it also is an example of the virtues of the more interdisciplinary, even subtle, approach to security studies embraced by European institutions such as King’s College. Drawing not only on well-researched history but on other social sciences such as economic theory, The Forgotten Front is refreshingly jargon-free and clearly written, thus making it an ideal study companion for readers of the Naval War College Review.'

'Because of its central theme and extensive supporting evidence, The Forgotten Front is one of the most significant recent books on counterinsurgency, with major policy implications for the United States and its allies.'

'The Forgotten Front marks a valuable contribution to the rapidly growing literature on the causes and consequences of security assistance between states.'