Race, Class, Law, and the Collapse of Postwar Liberalism 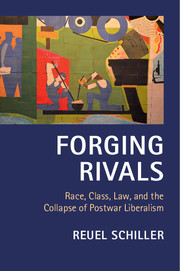 The three decades after the end of World War II saw the rise and fall of a particular version of liberalism in which the state committed itself to promoting a modest form of economic egalitarianism while simultaneously embracing ethnic, racial, and religious pluralism. But by the mid-1970s, postwar liberalism was in a shambles: while its commitment to pluralism remained, its economic policies had been abandoned, and the Democratic Party, its primary political vehicle, was collapsing. Schiller attributes this demise to the legal architecture of postwar liberalism, arguing that postwar liberalism's goals of advancing economic egalitarianism and promoting pluralism ultimately conflicted with each other. Through the use of specific historical examples, Schiller demonstrates that postwar liberalism was riddled with legal and institutional contradictions that undermined progressive politics in the mid-twentieth-century United States.

'Reuel Schiller documents the growing tensions between two pillars of Democratic liberalism: the labor movement and the civil rights movement. Schiller masterfully describes how these two movements depended on different, and often antithetical, legal systems and how the conflicts between these systems contributed to the hostilities between these one-time allies. This book is of interest to everyone who follows politics and wants to understand why liberalism is where it is today.'

Thomas B. Edsall - Columbia Graduate School of Journalism and Op-Ed Columnist for the New York Times

'Why did a liberal coalition of white workers and African Americans, formed in the 1940s, persist into the 1960s only to collapse in the 1970s? Reuel Schiller recounts the growing stresses and strains with five carefully chosen, well-told, and skillfully arranged vignettes drawn from the labor and civil rights history of the San Francisco Bay Area. His masterful syntheses of labor policy, fair employment law, political thought, and political history place these stories in a national context; his engaging prose lets readers see how law shaped the hopes, fears, and political calculations of black and white activists, organizers, and workers. Essential reading for anyone seeking to understand the fall of the New Deal order or how law shaped American politics.'

'A beautiful book about a momentous topic: the collapse of post-World War II liberalism, the demise of the New Deal Democratic Party, and the resurgence of economic inequality in the United States. Reuel Schiller traces these developments to intractable legal and political conflict between the two great forces for progressive social change in twentieth-century America - the labor movement and the civil rights movement. Elegantly written, deeply researched and convincingly argued.'

'A superb and capacious history of the transformation and fragmentation of American liberalism. A masterful storyteller, Reuel Schiller moves effortlessly and powerfully from the great questions animating American law and labor to a set of nuanced studies of Bay Area conflicts between trade unionists and civil rights advocates. In a convincing and insightful narrative, he demonstrates that their rivalry was virtually predetermined, given the divergent legal discourse each deployed to achieve their version of workplace justice.'

‘Forging Rivals tells the story of how and why the New Deal liberal regime declined in the latter half of the twentieth century from a novel perspective: American law. Schiller argues that fundamental and ultimately irreconcilable contradictions between labor and civil rights laws after World War II led to a 'fatal weakening of liberalism’. He supports this claim by focusing on several significant legal and political conflicts in the San Francisco Bay Area between the 1940s and 1960s … The specific conflicts he analyzes are not only illuminating but dramatic and compelling as well. Summing up: highly recommended.’

'Schiller has written an important book about the decline of American liberalism over the late-twentieth century … This powerful story helps us understand the inherent tensions within liberalism when it comes to social justice.'