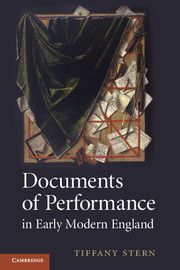 As well as 'play-makers' and 'poets', playwrights of the early modern period were known as 'play-patchers' because their texts were made from separate documents. This book is the first to consider all the papers created by authors and theatres by the time of the opening performance, recovering types of script not previously known to have existed. With chapters on plot-scenarios, arguments, playbills, prologues and epilogues, songs, staged scrolls, backstage-plots and parts, it shows how textually distinct production was from any single unified book. And, as performance documents were easily lost, relegated or reused, the story of a play's patchy creation also becomes the story of its co-authorship, cuts, revisions and additions. Using a large body of fresh evidence, Documents of Performance in Early Modern England brings a wholly new reading to printed and manuscript playbooks of the Shakespearean period, redefining what a play, and what a playwright, actually is.

'The exciting thing about Tiffany Stern’s widely acclaimed book, Documents of Performance in Early Modern England, is that it made me look again at familiar literary and theatrical material that I had long taken for granted … Stern’s reading is staggeringly wide and her book - besides being both easily readable and entertaining - is full of pertinent illustrations of her various conclusions … I was excited by all that I was learning … This is an important study, stimulating and riveting to read, exhaustively well-researched and clearly organized. I heartily recommend it.'

‘Very occasionally a book comes along which should have a significant revisionary effect across a number of academic areas of study. Documents of Performance [in Early Modern England] is such a book … Tiffany Stern calls into question many of the assumptions behind current early modern scholarship on authorship attribution, editing theory and practice, paratextual materials, playhouse performance, and play interpretation … Stern's important arguments on the patchiness of plays … all early modern theater scholars will now have to take into account.'

‘… a major contribution to our understanding of early modern theatre practice … required reading.'

‘… a wealth of intriguing insights … teaches us more about [documents'] use and importance than we thought could be known.'

Lukas Erne Source: Around the Globe

‘… an important and fascinating book … challenges many misconceptions and sheds new light on the personnel and practices of early modern theaters and on the fragmentary character of the texts they required, produced, used … Documents of Performance [in Early Modern England] is … constantly enlightening … lively … impressive …'

‘Stern's work delights … with the high-resolution, multipixel visions she offers of the early modern theatrical world, not just in the playhouse, but also in the streets of London … Superb.'

‘The work that Documents of Performance [in Early Modern England] carries out in terms of reading into the components of the playbook, and analysing what is on the page - as well as what is not - provides the practical basis for a deconstruction of every early modern playtext, and a textual methodology rooted in the performance origins of drama … Stern's work is useful to every editor and informative for every student and researcher and is quick to elaborate on areas of possible further research and its implications for the remainder of the field.'

'This revelatory work of original scholarship will have a seminal impact on the study of early modern drama, on the editing of plays, and on studies of dramatic authorship.'

'… the engaging, enquiring, and authoritative way in which [Stern's] book operates will make it a challenge and a point of departure for many.'