Home
The Divine in the Commonplace

The Divine in the Commonplace

Reverent Natural History and the Novel in Britain 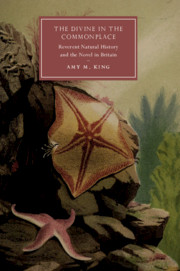 Realism has long been associated with the secular, but in early nineteenth-century England a realist genre existed that was highly theological: popular natural histories informed by natural theology. The Divine in the Commonplace explores the 'reverent empiricism' of English natural history and how it conceives observation and description as a kind of devotion or act of reverence. Focusing on the texts of popular natural historians, especially seashore naturalists, Amy M. King puts these in conversation with English provincial realist novelists including Austen, Gaskell, Eliot, and Trollope. She argues that the English provincial novel has a 'reverent form' as a result of its connection to the practices and representational strategies of natural history writing in this period, which was literary, empirical, and reverent. This book will appeal to students and scholars of nineteenth-century literature, science historians, and those interested in interdisciplinary connections between pre-Darwinian natural history, religion, and literature.

'In this elegantly written study of the relationship between nineteenth-century natural history, natural theology, and the English novel, King has shown how all three are designed to celebrate the commonplace. Rather than reading this as a sign of the advance of a secular empiricism, King brilliantly explores how the focus on the ordinary, the hallmark of English provincial realism à la Austen, Gaskell, Kingsley, Trollope, and Eliot, is actually indebted to the reverent form of natural history.'

‘Amy King's The Divine in the Commonplace marks a quiet but major revision in our thinking about Victorian realism. Instead of reading it in relation to secular scientific empiricism, she demonstrates with scholarly authority its greater closeness to natural history writing and its religious understanding of the natural world. Her analysis of its strategies and of novels that emulate it is startlingly new, and her wonderful coinage, 'reverent empiricism', should become a standard descriptive term in criticism of the Victorian novel.’

‘Through its thorough engagement with recent history of science scholarship, and the yoking of this with exemplary close readings of fiction, The Divine in the Commonplace makes some insightful broader points about the nineteenth-century realist novel … The Divine in the Commonplace also argues for a new understanding of the novel’s relation to religion … King’s carefully articulated ‘alternative interpretation’ to the view that nineteenth-century realist fiction was the ‘cultural twin’ to Victorian scientific naturalism has every reason to prove as influential as Levine’s original proposal for scholars of science and literature and the novel more broadly.’

‘Amy King’s [is a] revisionary history of the nineteenth-century British novel … This argument makes a formidable contribution … King’s study challenges readers to rethink the formal affiliations of realism as well as the ‘persistence of a religious worldview’ in the Victorian novel. These are substantial claims, and the overall cohesiveness of the argument owes much to King’s comprehensive and detailed introduction … [which] shows the depth of King’s engagement with scholarship by historians of science, who began in the 1990s to challenge the reductive binary of ‘science vs. religion’ as applied to studies of nineteenth-century culture. Her synthesis of scholarship on this topic by Jonathan Topham and John Hedley Brooke, among others, provides strong evidence of how ‘religiosity persist[s] in genres we have previously understood as secular’.’

‘King’s quiet historicism allows her (and us) to see the continuities, residues and renewals of faith and affirmation because of, not in spite of, science … King’s research shows how, as novels sat with bestselling natural histories at railway kiosks, natural theology, natural history and realism were parallel and often entwined practices, rooted in philosophical empiricism and in reverence for the everyday, the exceptional of the commonplace, and for a nature that is both material and luminous … [King] writes an accepting, accommodating and open book and a tale for our times, a reflection of the compatibilities, co-existences and reciprocities of faith and science, that strikes a chord as we seek new emotional and spiritual connection with nature.’

‘King not only declares the importance of honoring the divine in the nineteenth-century commonplace but also quietly invokes a loving and devotional respect for the everyday in our own.’