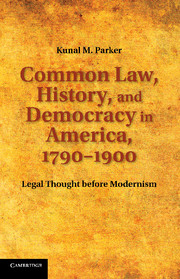 This book argues for a change in our understanding of the relationships among law, politics and history. Since the turn of the nineteenth century, a certain anti-foundational conception of history has served to undermine law's foundations, such that we tend to think of law as nothing other than a species of politics. Thus viewed, the activity of unelected, common law judges appears to be an encroachment on the space of democracy. However, Kunal M. Parker shows that the world of the nineteenth century looked rather different. Democracy was itself constrained by a sense that history possessed a logic, meaning and direction that democracy could not contravene. In such a world, far from law being seen in opposition to democracy, it was possible to argue that law - specifically, the common law - did a better job than democracy of guiding America along history's path.

‘This is a wide-ranging and highly original treatment of law and history in nineteenth-century America. Parker incorporates into his story many new texts that have not been examined in this context before and re-examines familiar texts with a fresh eye and novel interpretations. Common Law, History, and Democracy in America, 1790–1900, is an illuminating and insightful work, offering an important contribution to the growing literature on historically and socially minded jurisprudence.’

‘Parker has written an original and stimulating work of intellectual history. By insightfully analyzing how different historical sensibilities and temporalities interacted in nineteenth-century America, he succeeds in revising not only the standard narrative of American legal history, but also our understanding of nineteenth-century historical consciousness.’

'With this bright and closely reasoned book as a shining example, one can say that legal history has entered its post-maturity age … essential reading for everyone interested in nineteenth-century American law.'

'Kunal Parker's Common Law, History, and Democracy in America, 1790–1900: Legal Thought Before Modernism shows how nineteenth-century thinkers thought about law and history differently than do post-Holmesian modernist sociolegal scholars, whose ahistorical law appears contingent on politics, power, or will … His history of legal thought before modernism suggests, further, the predicament of antifoundationalist modern law and modernist scholars: stripped of time and without its own history, how can law be anything other than politics, power, or will?'

'Parker’s book is an important part of the recent reconceptualization of nineteenth century legal thought.'

'The read is well worth the time and effort. If you’re interested in the history of legal ideas, read it.'

'This book is a history of the way in which ideas of history shaped thinking about the common law.  This novel and instructive approach makes this book original and stimulating, and revises our understanding of American and English law.'

Jonathan Silberstein-Loeb Source: The Journal of the Historical Association

'This book is an important contribution and a considerable achievement.'