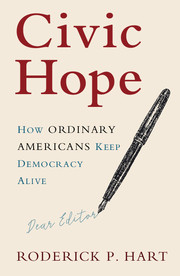 Civic Hope is a history of what everyday Americans say - in their own words - about the government overseeing their lives. Based on a highly original analysis of 10,000 letters to the editor from 1948 to the present published in twelve US cities, the book overcomes the limitations of survey data by revealing the reasons for people's attitudes. While Hart identifies worrisome trends - including a decline in writers' abilities to explain what their opponents believe and their attachment to national touchstones - he also shows why the nation still thrives. Civic Hope makes a powerful case that the vitality of a democracy lies not in its strengths but in its weaknesses and in the willingness of its people to address those weaknesses without surcease. The key, Hart argues, is to sustain a culture of argument at the grassroots level.

'Professor Hart is amongst the most well-known and highly-regarded students of political language. It should come as no surprise, then, that his recent book offers a careful analysis of political language, this time in letters to the editor. And his findings - focused on ‘civic hope’ even in a period of heightened political polarization - offer a unique perspective, not just on what we can learn from newspaper content, but on the centrality and importance of a ‘culture of argument’ in American democracy.'

'Civic Hope sheds light on an often-overlooked but, as Hart compellingly argues, foundational aspect of American democracy. Drawing on a stunning collection of letters to the editor from a dozen US cities, as well as a rich set of associated surveys and interviews, Hart demonstrates what the humble letter to the editor can tell us about timely issues in contemporary political communication and timeless questions about democracies and publics. A masterwork of substance and style, this book should be essential reading for anyone interested in understanding and promoting healthy public discourse.'

'Civic Hope is a beautifully written analysis of letters to the editors of local newspapers in 12 mid-sized American cities from 1948 to 2012. It shows how ‘the people next door’ persevere to renew the possibility for participatory democracy through their arguments. Hart’s thesis is that a culture of argument and complaint at the grassroots is what makes democracy flourish. The letters provide a different metric for assessing public opinion, one that reaches well beyond the omnipresent public opinion poll, to enrich understanding of the textured nuances of the public’s beliefs. It is a fascinating story as it traces changes over time across geographical and partisan differences. In these turbulent political times, this book offers a gift of hope.'

'Hart offers a corrective to the gloom and cynicism that suffuses discourse about politics and democracy today. Despite its undeniable problems, American democracy is surviving due to argumentative, sometimes cantankerous citizens and their humble acts of democratic citizenship. Hart wants us to look away from the spectacles that seem to be the stuff of daily politics and look instead to how ordinary people make sense of politics through a lens of their own.'

'How is participatory democracy maintained and renewed? Rodrick P. Hart persuasively argues that it is through the expression of ordinary citizens, their concerns, their arguments and their complaints, as found in the letters to the editors of local newspapers. In tracing these texts across 60 years and a range of geographic contexts, he reveals and reminds that citizen discourse is often the best indicator of public opinion, and that the voices of ordinary people are critical to the health of democracy.'

'Using complex content analysis, Hart goes into meticulous detail about who writes letters to the editor, what people write, how letters have changed over time, who reads such letters, how such letter-writing contrasts to anonymous internet posts, and why it is critical to the lifeblood of American democracy. Throughout the book, Hart weaves in academic research in a readable, nontechnical manner that strengthens the arguments and discussion. Overall, the book is well organized and readable. It is recommended to a general audience as well as undergraduate and graduate students. This book may be useful in a broad range of academic study, including political science, particularly for students and faculty studying political participation, communications, media, and other academic disciplines.'