Home
Children and their Environments

Children and their Environments 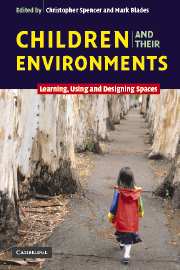 This fascinating book examines theories of children's perceptions of space and place and explores how these theories are applied to the world of children. The focus is on children in large real world spaces; places that children live in, explore and learn from. These include classrooms, playgrounds, homes and yards, towns, communities, countryside, natural environments, and the wider world. An international team of authors compare the experiences of children from different cultures and backgrounds. Often excluded from discussions of place-design on the presumption of lack of awareness, young children have many environmental competencies which should lead to their inclusion. They can read maps and study photographs, respond to the natural and man-made world with great sensitivity, and contribute considerably to the community. This book will appeal to environmental and developmental psychologists and geographers, and also to planners by linking research on children's understandings and on their daily lives to recommendations for practice.