Home
The Biology of Traditions

The Biology of Traditions 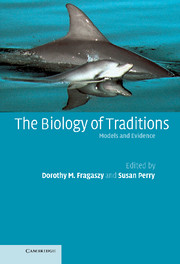 Socially maintained behavioural traditions in non-human species hold great interest for biologists, anthropologists and psychologists. This book treats traditions in non-human species as biological phenomena that are amenable to the comparative methods of inquiry used in contemporary biology. Chapters in the first section define behavioural traditions, and indicate how they can arise in non-human species, how widespread they may be, how they may be recognized and how we can study them. The second part summarizes cutting-edge research programmes seeking to identify traditions in diverse taxa in contributions from leading researchers in this area. The book ends with a comparison and evaluation of the alternative theoretical formulations and their applications presented in the book, and lays out recommendations for future research building on the most promising evidence and lines of thinking. The Biology of Traditions will be essential reading for students and researchers in the fields of anthropology, biology and psychology.

Review of the hardback:‘… essential reading …’

Review of the hardback:'… a valuable addition to the library of any primatologist with an interest in social learning.'

Review of the hardback:'I think this volume is worth reading in order to be familiar with various studies of tradition and social learning, especially those of capuchin monkeys. Readers of this book will find a very wide range of interests regarding tradition or culture in animals that could even bridge various existing research domains.'

Review of the hardback:'… a rich and comprehensive volume, grounded in traditional ethology, that offers a timely complement to a library of volumes on social learning in animals. Fragaszy and Perry have assembled interesting and provocative contributions from some of the leading researchers in the field of social learning … we heartily recommend this book … much of the material in this book, and especially the first and last chapters, would be of value to any researcher working in the field.'